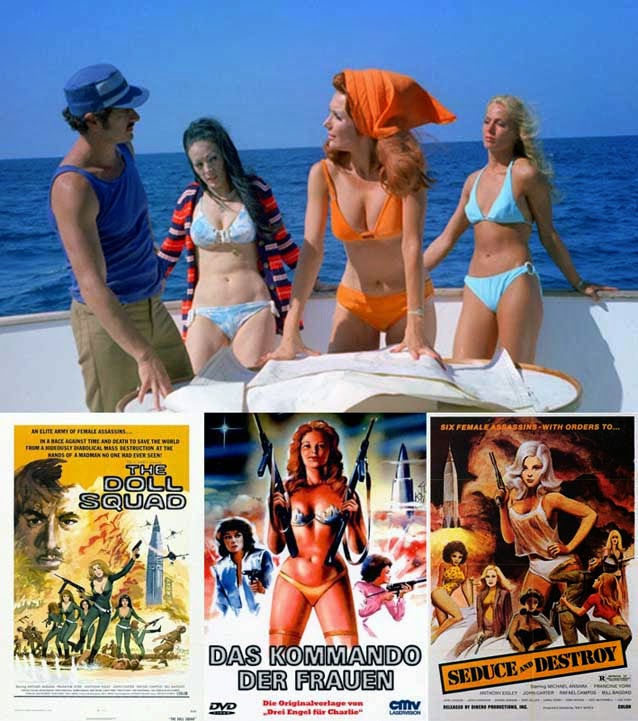 Warning: Spoilers but, meh, not really that kind of movie.

This movie is terrible.

Like... just the kind of “OMG WTF? terrible” all good movie enthusiasts should be exposed to every once in a while.

In fact, it’s so terrible, I’m going to show it to loads of people so they can share my joy in discovering it.

The Doll Squad is not a movie I’d heard of until the very recent release, by the Monstrous Movie Music label, of a limited edition CD of the score (buy it from them here). I listened to the samples, which are in the amazingly groovy and typical 60s/70s spy jazz mode, and knew I had to get the score. And as usual, as an after thought, I then looked the film up on Amazon and saw there was a relatively inexpensive double bill of this and another Ted V. Mikels film called Mission: Killfast on Blu Ray. So I had to check it out.

It’s been said that this brilliant but awful movie was the inspiration for the hit TV show Charlie’s Angels from a few years later and, watching this, I can well believe it. Even the leader of The Doll Squad is named Sabrina. Sabrina Kincaid to give her the full name, as played by Francine York. There are a few memorable “Doll names” scattered throughout the movie with that kind of vibe to them... like Kim Luval, as played by Jean London and Lavelle Sumara, as played by the legendary Tura Satana of Faster Pussycat! Kill! Kill! fame (reviewed here). She also appeared in some of this director’s Astro Zombie movies, including this one reviewed here.

The film starts off as it means to go on... with some ludicrously bad acting, for the most part. They even have the main villain in this, called Eammon (yeah, ‘cause villains called Eammon sound really threatening, right?) played by Michael Ansara and, with apologies to Mr. Ansara... even his acting seems quite bad and hammily overplayed in this.

Anyway, in the first scene of the film, leading into some not so hot, psychedelic, posterised credits, we are presented with two government officials watching their latest space rocket take off. Unfortunately, a badly superimposed explosion over the TV image shows the rocket destroyed (fairly unconvincingly, it has to be said) and a voice on their TV warns them they should have given the bad guy (that would be Eammon, then) the “nuclear device” he has asked for. This is obviously only the beginning of a reign of terror, curiously and unexplainedly targetting rocketship launches, which will not be stopped until our unlikely government representatives have given evil Eammon his nuclear device. What can be done?

Well, what is done is that, just like at the start of Our Man Flint, but without the budget or resources of a film like that, the “facts” are fed into a computer in the office to find the best people to end this reign of secret terror. And, of course, the name that comes up is... Sabrina Kincaid of The Doll Squad, an all female group that one of these two guys just happens to be the boss of.

Sabrina, who is at least a better actor than these two and, certainly, one of the least wooden performers in a film filled with arboreal talent, then goes to contact the two of her secret squad that the computer has recommended. However, it soon turns out there is a mole in the government agency... although this mole is not too hard to spot due to the dearth of possible suspects who we’ve met in the film so far. Anyway, Sabrina recruits two of her brightest and bestest, a scientist and a martial arts expert and it’s here that we find ourselves in the realms of a 1970s movie which seems, in some ways, to be totally sexist but, in reality, if you look beneath the surface, is actually a really great movie for depicting women in a variety of roles which are anything but those normally associated with the “so called” fairer sex. So that’s good, right?

However, after Sabrina has recruited these two, it then becomes obvious there is that aforementioned mole in the office because the two girls are bumped off by the bad guys. And here’s another interesting curiosity about this film, which may or may not be a Ted V. Mikels stylistic hallmark. Midst the almost Batman-camp atmosphere (on a clay pigeon shoot, Sabrina casually uses her gynormous cleavage to keep spare rounds of ammunition in), when someone is killed or injured in this movie... it tends to happen in the most brutal fashion. These two girls, for example, are both shot in the head and there is some bloodiness in here... one of them, as others later in the movie do, even has an exploding blood/flesh squib going off on the back of her noggin. So it’s a curious blend of fun with enormously sexy, eye candy women pitched against a level of violence which would earn this movie either a 15 or 18 rating these days. Very odd.

When one of the bad guys goes to take out Sabrina, she uses one of her secret agent box of tricks gadgets we have already seen her alluding to in an earlier, kind of “reverse Q briefing” scene. That means she uses her handy flame thrower cigarette lighter to burn the said bad guys face off in a restaurant full of people. Actually, it turns out later in the film that he only got away with a half burned up face and an eye popped out but, in a scene near the end which I would imagine was a big influence on Tarantino and something he did with his Kill Bill movies, Sabrina stabs out his other eye too, for good measure.

Soon after dealing with an undercover “bad girl” who has infiltrated The Doll Squad, Sabrina gets a new team and, after quickly finding out where the villain keeps his secret, desert island lair, she... and a load of deadly agents (including the aforementioned and quite watchable Tura Satana)... land on the island, split up and then find various ways to either infiltrate the villain’s lair or become prisoners there (which more or less amounts to the same thing when you’re watching spy movies... especially ones of this kind of pedigree).

Lots of spy gal hijinks ensue such as kicking, stabbing and shooting at people. One of the more ingenious being that the girls have their secret agent exploding spy drink, which they feed to two guards in a laced bottle of vodka... two guards who obviously don’t have enough sense to be too suspicious that they can’t be tempted by the ladies’ gorgeous bodies and, more importantly, their impressive picnic hamper. However, the ladies back off when the guards start rubbing their tummys in pain and, before you can say spontaneous human combustion, our easily duped guards both explode.

Except, when I say explode, they seem to have the exact same stock footage shot of an explosion superimposed over them, then the film is stopped on the footage in the layer behind so the guards can quickly walk out of frame, and then when the explosion is faded back out, the guards have mysteriously gone, leaving no messy aftermath or human debris behind after them. And if that sounds like an excessively cheap ass way of doing things then a) it is and b) it’s the way every explosion in this film seems to be handled... building, rocket or human being alike. In fact, I think it’s the exact same stock footage explosion used every time, too. At the end, one of the girls pulls out a fortuitously stashed bazooka to take out a man with a flame thrower and, although the end of said bazooka is conveniently placed off the side of the shot so we can’t see anything actually being fired from the muzzle, the exploding man who is victim to this handy, dandy, portable instrument of mayhem seems to be suffering from the exact same stock footage demise as everything else. How bizarre?

The film continues in this vein for a while and never gets boring. The villain's plot, it is revealed, is to unleash the bubonic plague on the rest of the world by infecting them... I wasn’t quite sure how (or even if) that related to the nuclear device bandied about as the plot set up at the start of the movie but I’m sure it must make some kind of sense somewhere (no, actually, I’m really not sure of that at all... this thing seems to be veering in all directions at once). The acting ranges mostly from bad to... um... worse and I noticed that occasionally someone will stumble a line and there was no reshoot... I’ve no idea why, unless the film stock was really that expensive.

More of the strange tone of the movie comes out when the “new girl” agent, who the other members of The Doll Squad are trying to protect, gets shot through the head while being rescued and is then barely mourned (or even remembered) by her hardened colleagues. Curious stuff.

This is partially made up for by a flirtatious game of cat and mouse between Eamon and Sabrina which soon turns into them trying to kill each other. Sabrina throws a bottle full of Martini over Eamon and then throws the end of a lamp cable on him in an attempt to electrocute him... which, as you may imagine, isn’t really something which works a whole lot. In retaliation, Eamon then starts to strangle Sabrina from behind and, it has to be said, the sounds and reactions Sabrina makes in this near death portrayal are... not going ot win anyone any oscars. Luckily, however, Sabrina has her special Doll Squad ring which she uses to spray mace into Eamons face and, while he’s rolling around, trying to recover, Sabrina pulls what looks like an ancient Greek sword from the wall and stabs Eamon to death. I did notice that she then picks up her pistol and I thought she was going to further put a few rounds of ammo in him just to make sure but sanity prevails here... for a good few minutes.

After this, we just have the escape from the island compound and the usual, debriefing scene at the end to sort out before going into what can only be described as one of the worst “spy songs” I’ve ever heard in my life. Now I usually love cheesy spy songs... I even use them on Valentines Day compilations for people I really like (Your Zowie Face from In Like Flint is a natural for Valentines... and also explains, maybe, why I hardly ever get the gal)... but even my eyebrows were raised when I heard this one. Shockingly bad end title music which I can only say I was deliriously happy  to hear again, as it’s on the new CD together with the score.

So there you have it. The Doll Squad... an all girl team of sexy(ish) secret agents done on a considerably low budget, with some outrageously fun stuff going on and a nice, jazzy spy score by Nicholas Carras. Definitely something which can only be appreciated these days as part of the “so bad it’s good” category but that’s okay, I can get behind that. Definitely one to watch if you have a passion for the camp and terrible.
Posted by NUTS4R2 at 19:25