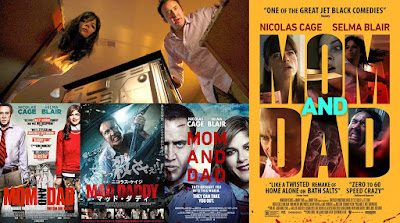 Well this is an interesting movie. I’d wanted to see this when it hit the cinemas late last year (maybe a year behind the US release) but it only played for a week and I think I must have been ill or something so I missed it. I didn’t recognise the name of writer/director Brian Taylor when I sat down to watch this thing but, now that I’ve looked him up, it seems obvious that this would be the fun, off-beat film it is as he’s the guy who wrote and directed the two brilliant Crank movies and, also, the blisteringly good sequel that was Ghost Rider - Spirit of Vengeance (which I reviewed here). Makes perfect sense now.

The film covers quite a gruesome theme but it’s got either some extremely curious choices in it about the way it handles the violence or, possibly, the studio may have got nervous about it and pre-cut it before it got submitted to the various censorship boards. I mention this as a possibility because, while the violence and story content is quite grim, you don’t get to see too much of it actually ‘in camera’. Aftermath of the violence sure and, frankly, because of the way this one is shot, you certainly feel the implied violence much more than you might have had if you’d actually seen it.

Either way, it doesn’t bother me too much because, due to the strength of the premise and the way it’s presented here, you certainly feel like your witnessing something much worse than you might have at first thought the film could be if it was shot in a more conventional manner.

The film starts off with a mother parking her car on the middle of a railway level crossing. As she leaves her car in an almost trance-like state you can just catch the head of hair of her infant as she leaves it to its fate. Just before the inevitable destruction of the car and the child, the screen fades rapidly to black... and this is a prime example of the camera not catching the actual path of destruction on screen.

We are then taken into a quite fantastic opening credits sequence which is a complete throwback to the kinda of credits sequences designed back in the mid to late 1960s. It involves a lot of split screen and different things going on in various miniature frames with Dusty Springfield singing Yesterday, When I Was Young on the soundtrack, pre-empting the mid-life crisis that both Nicolas Cage as Dad and Selma Blair as Mum both seem to be going through here. The whole opening titles sequence reminded me, somewhat, of the original first version of The Thomas Crown Affair to a certain extent.

Right from the start I was hit by the feeling that someone who really knows how the language of cinema works and is not afraid to take risks, was at the helm. There’s all kinds of styles and camerawork on display in this thing from sections of static shots edited together (sometimes rapid fire and sometimes, not so much), lots of moving camera and even some instances of that kinda voyeuristic way of shooting so that the camera is just slowly moving around in a handheld way and then latching onto something to pick out as a detail. Also, this man doesn’t fear the use of the zoom lens or rack focusing to put his films together and, while it’s not as beautifully, stylistically chaotic as the Crank movies (which also seem to somehow work really well against the odds), it all just seems to blend together so well.

After a while, the plot starts to come in focus and it involves an epidemic of all the parents nationwide trying to murder their children... and only their children. They are all absolutely aware that people are doing horrible things to their offspring but, when it comes to their own children, as soon as they see them they are overcome with rage and try to kill them. Like some of the best zombie and epidemic movies, there is no real explanation as to what is causing this national crisis or why... it just is happening and that’s the end of it. Which is kind of an interesting premise I think.

Throughout, the director uses the ‘screen goes black for a few seconds’ modus operandi as in the pre-credits sequence to basically punctuate the film like little breaks or subconscious chapter stops and also, in some instances, he uses these to usher in little flashbacks to scenes which, at various moments in the narrative of violence that plays out, give a respite and a moment to reflect how long and well established certain parent/child relationships are. Not to mention a scene which explores the lost dreams of both Mom And Dad as we see Nicholas Cage build a pool table from scratch before letting out all his anger and demolishing it with a sledge hammer. However, what these moments of reflection also do, of course, is provide the audience with a respite and a chance to simmer down again before leaping straight back into the intensity of the scene we were watching prior to the flashback.

The performances are brilliant. I’m really getting the hang of Nicholas Cage now and his perfect switches from jokey humour into... ‘you better be taking my threat seriously’ stares are just wonderful. He has Selma Blair matching him in the ‘somewhat off-kilter’ stakes playing a mother concerned for the safety of everyone else’s children but her own.. who she’s trying hard to kill. The one and only Lance Henriksen also does a great little job as Cage’s father towards the end of the movie here. And the kids played by Anne Winters, Zachary Arthurm, Robert T. Cunningham and Olivia Crocicchia are all pretty credible in this too.

There’s some nice use of needle dropped music during the movie, such as the Dusty Springfield song I mentioned earlier but, there are also some nice things happening on the instrumental side of things too. Composer Mr. Bill keeps things light and neutral in some passages and then switches into some dark and sinister electronic stuff to highlight things but, sometimes he will score the scene contrary to what you are expecting to hear, to make a comment on what you are watching. For example, a montage of various families chasing their offspring from school and killing them is played out to some cheery, up beat muzak. The movie reminded me a little of Kubrick’s A Clockwork Orange in terms of the way some of the musical decisions go here, for sure.

At the end of the day, Mum And Dad is a film which deals with the idea of parental betrayal couched in the language of violence in which the cinematography and edit cause you to perhaps, in some scenes, feel more than you would see. These include ‘long game’ pay offs, for example, where a shot of the housekeeper repetitively slamming a meat hammer against a kitchen board building on from various activities preparing food with potentially lethal implements is enough to imply exactly what she does to her daughter when the camera... and one of the other kids... look away. It’s a quality production and in terms of the way the film feels, it would not look out of place with a themed all nighter at a cinema playing this along with Cronenberg’s Shivers (reviewed here) and Rabid (reviewed here), Romero’s Night Of The Living Dead and Rollin’s The Night Of The Hunted. Frankly, Mum And Dad deserves to be in such good company because it’s a makes a really interesting little study of a condition which, by the end of the movie, is never fully explained and certainly isn’t cured in any way (although there are some visual hints about what’s carrying the ‘virus’ at various points). A good little genre film by a director who continues to make interesting movies. I just wish he were a little more prolific with the frequency of his output, to be honest.
Posted by NUTS4R2 at 19:01