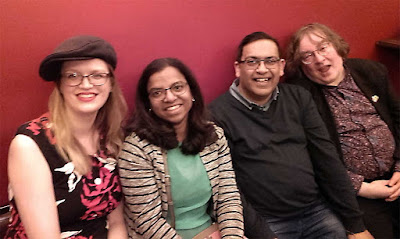 Kerry Singh was my best friend.

Regular readers will have occasionally heard of him on this blog before (in posts like this one about Blade Runner) but I don’t recall if I’ve ever mentioned him by name before now. I’ve known him for around 40 years after we met on the first day of school back in the late 1970s but I don’t think we actually started talking to each other and hanging around together properly until around June 1983. Kerry was three weeks older than me but, because he was born in December of ‘67 and I in January ‘68, I got to wind him up every year by telling people he was a year older than me. It used to be our favourite annual argument, as we both grinned at each other while Kerry clarified the dates with whoever we were with.

I can remember, more or less, how our proper friendship started. For some reason I wanted to go to see a film at my local cinema (which would have been called the ABC Cinema in Enfield at the time) and something, I don’t know what, made me ask Kerry if he wanted to go with me. He surprised me by saying yes and so we both went and saw Educating Rita together. In fact, my recollection is that we both loved it so much, we went back another two times over the next couple of weeks.

After that, we started regularly going to the cinema more and more, with or without our select group of friends at the time (Hi Steve, Jason and Andy!) and we saw some real crackers, often on a Saturday evening after I got out of my Saturday job at W. H. Smith’s, when Kerry would bring his van around (he was always between 10 mins and 3 hours late... apart from that one time when he was a spectacular 24 hours late) and we’d bomb it into London, park in one of the free spots around the back of the British Museum and then walk, more often than not, to our favourite cinema... the Lumiere on St. Martin’s Lane (although sometimes we’d hit the Metro on Rupert Street or, if we couldn’t find the film we wanted playing anywhere else, one of the tiny screens at the Swiss Centre)... to see some great movies such as Betty Blue, The Hairdresser’s Husband, Merci La Vie, Monsieur Hire, Sante Sangre, Nikita (aka La Femme Nikita... we had multiple visits to that one) and a whole host of others. Then, after that, we’d hit Tower Records on Piccadilly Circus (they were open until midnight) and then follow it up, when Tower closed their doors, with a quick trip to Dunkin’ Donuts opposite (goodness knows if they ever shut), before walking back to the British Museum and then heading home.

Other times it might be the Barnet Odeon... in which case we would more often than not follow it up with a drive to Hampstead for their pancake stall. At the time this stall was located right next door to the Hägen Das ice cream parlour... which we’d hit straight after finishing up the crepés before calling it a night.

Kerry was one of those rare people I could connect with and know his exact thoughts. We used to know what each other would say about any situation before it happened, which made us a good double act, expecially if we were playing partner whist. To say we had a lot of fun to offset the darkness of our normal 9-5 would be an understatement. We used to laugh a lot, partially due to Kerry’s completely contagious humour. He would always be there to cheer you up when things were down and we always had each other’s back. And if either of us yawned loudly, the other would yell... “No Chewie, No! You have to stay here and look after the Princess.” Like I said, fun times.

Kerry got married and started a family ten years ago so we didn’t see each other as much as we did in the old days but we were always there for each other and, after my cousin moved to Australia a few years ago and we realised we hadn’t been seeing each other as much as we’d liked, we decided to make sure we went to the cinema with each other at least once a month and that’s what we did. We saw all the Marvel movies together and Christmas week was reserved for new Star Wars films. The last film we saw together was Avengers End Game but we planned on seeing the new Spider-Man and Shaft movies as our next ones. Alas, that was not to be.

I remember a couple of years ago... I did something and I don’t even remember what it was, probably made Kerry aware of a bargain and picked something up for him he might otherwise have missed. Anyway, I remember him thanking me for still looking out for him. I reminded him that this is what we always did for each other... look out for one another... and I know I was always grateful he was around to talk to and keep me sane. Especially since he was the practical one of the two of us. I wouldn’t know how to wire a plug or fix a fence or a gazillion other things but, if you needed some help with something like that, Kerry was your man.

Kerry passed away earlier in the year on the 24th May 2019, quite unexpectedly and in circumstances I find hard to come to terms with. I miss him a lot.

So why have I left it until November 2019 to write a memorial piece for my blog? Well, asides from the fact that it’s still painful to think about, November 2019 was going to be a special month for us. Here’s why...

Back in the days before 1992 (sometime around 1985 is my guess), I introduced Kerry, by way of a screening at either Barnet ODEON or the Everyman Cinema in Hampstead (once one of our favourite repertory cinemas but, alas, not the cinema it once was anymore), to Ridley Scott’s 1982 movie Blade Runner. I’d seen it with my folks back on its first release and it had become my favourite movie. I thought Kerry might like it and he did. As much as me, it turned out and so we started going to see it, usually on a midnight screening, whenever any cinema in London or the suburbs showed it (we even saw it presented by Rutger Hauer once... Kerry met him in the toilets and grabbed his autograph as I recall. I had to wait until after the show to secure my signature). Pretty soon we started noticing a lot of familiar faces in the audience for this film which, you might remember, totally flopped on its original release. It was like being part of a little, dedicated community.  In those days, it was just about able to be called a cult movie... before a surge of popularity created by people like Kerry and myself and riding the crest of an accidental Los Angeles screening of the rush assembly cut, brought it back into the public eye forever more. We loved that movie and I remember asking Kerry once what his favourite film was... expecting the reply to be either The Pink Panther or A Shot In The Dark. Nope. “Same as you...” came the reply... “Blade Runner”.

So... as you probably know, Blade Runner was a film set in the near but so far future of Los Angeles, November 2019. So we said to each other that, if we were both still around in the year 2019 (we couldn’t even imagine we would be), then we would fly out to Los Angeles together to see if the reality lived up to the beautifully shot urban decay of the film. It was a promise we’d made each other but, as is often the way with such things, as we got nearer the decade we both realised that the expense, both monetary and in time, of getting to Los Angeles in November of this year was a bit of a hard ask. But I knew, as I’m sure Kerry did, that we’d need to mark the month somehow. We would have to do something. One opportunity which came up, although it was sadly scheduled for October 2019, was a ‘live music to film’ screening of Blade Runner at the Royal Albert Hall. I went to it by myself in the end. It wasn’t a good performance actually but I know Kerry really wanted to go. I remember ringing him up in January or February this year asking if I should book us tickets and, although he was up for it, he said that it was half term week and he wanted to spend as much time as possible being there for his wife and child. Which I totally understand and I’m mentioning this here because I want you to realise just how much Kerry adored his family. They were everything to him. They were so good for him and I hope somewhere up there he’s still keeping an eye out for them (and on me for that matter... I’m pretty sure he’s laughing at some of the ridiculously incompetent things I’m doing these days in his absence, that’s for sure).

Anyway, the point is, this was the month we were supposed to be doing something really cool but, alas, Kerry didn’t live long enough for us to hatch up any plans, it turned out. Though he passed on in May, I’ll always remember him and our November promise.

I’ll still occasionally mention him in the odd blog review, of course. He’s been far too big an influence on my life not to. So when certain films finally get re-watched and reviewed here, you may recognise his name and from now on I’ll make it a hyperlink back to this post so you can read just who he was to me and know of the huge void left in my life which can’t ever be filled in quite the same way again.

Kerry Singh was my best friend and he always will be.