Doctor Who: Day of the Moon

Labels: Day of the Moon, Doctor Who, Steven Moffat, The Silence

Blood and Circuses
Vampire Circus UK 1972
Directed by Robert Young
Screening as part of a double bill in a pub
as part of the Classic Horror Campaign.
http://www.classichorrorcampaign.com
OK, short entry here because I was less than enamoured of this particular film.
This is the second of the two films I saw projected on a big screen at the Roxy Bar in London as a presentation of the Classic Horror Campaign (a campaign to bring back the classic, late night BBC2 horror double bills from the 70s and 80s... check out their website right here). I reviewed the first part, the always excellent Night of the Demon yesterday (reviewed here) and now it’s the turn of an interesting little Hammer movie, Vampire Circus.
Now I’ve slowly been getting back into Hammer gradually over the last couple of years but this is one I’ve not seen recently, if at all. If I ever did see it then it would have been back in the 70s when I was about 9 years old... and probably in an edited version on TV. Little parts of it did ring vague bells as I was watching but that also might be to the familiar locations and plot devices which it shares with a load of other Hammer movies of the time.
It’s weird I didn’t take to this one because there were some "less than common for the genre" elements to the film and, also, the hosts for the show cybershizoid (his blog here) and scaresarah (her blog here) had promised “blood and boobies”... and I do confess to having a penchant (weakness) for bosoms besmirched with a touch of Kensington gore... so this film should have been a shoe-in for me.
The film started off well enough with a bosomy vampire sex scene and a torch and pitchfork wielding angry mob exacting their furious vengeance on said vampire and his young lady... and of course, at the denouement of this set-up we had the time-honoured “curse” placed upon the “mobbed-up” villagers in question which then sets the pace (somewhat slow and lethargic in places) for the rest of the movie which occurs some twenty years after the “death” of the vampire in the prologue.
While the quarantined villagers are busy dying from a plague which, we find out later, is carried by the bite of vampire bats, a circus (indeed, a vampire circus) rolls into the village to kill the folk from the start of the film... and their young offspring. Now, I know this was a Hammer production but when I say circus I use the term loosely. I saw exactly "two small coaches only" roll into the community but from this they manage to construct a modest show including three animal cages and a hall of mirrors. That’s pretty good for two coaches... where did they keep all the people (the ones that weren’t slumbering in their tiger or panther guise that is). That’s pretty good going... I guess since they do have a mirror which is a portal to a place under a spooky vampire castle so they can do their vampiric murdering in relative peace, then a decent case could be made that their coaches are in fact dimensionally transcendental. Although, if this is the case, I don’t know why the villagers don’t rumble them any sooner.
Actually, looking at said villagers... I think I do know why they don’t rumble them sooner. The community in the film, it has to be said, is not one where intelligence and common sense prevail in an atmosphere of reason and logic. I wouldn’t like to live there or possibly even spend a few weeks there... but what can you expect, I guess, from a place which makes Thorley Walters their burgomaster!
Vampire Circus is a bit of a strange one in the Hammer cycle of films, at least to me since I’ve probably only seen about 50 or 60 of them. There are exploding, squib blood effects from impact wounds which I don’t remember seeing in a Hammer film before and the predominance of naked flesh on show place this film squarely after the far superior (in terms of atmosphere and watchability) The Vampire Lovers. This would normally be enough to engage me with the movie, at least on some level :D but on this occasion, even the presence of a future Doctor Who babe (Lalla Ward before here double stint as the Princess Astra and then second incarnation of Romana) was not enough to keep me entertained for this one. This is one DVD which I won’t be buying when it gets released later in the year but I’d still urge all Hammer fans to pick this one up if you’ve not seen it. Worth a look at least once.
Again, thanks and appreciation to the Classic Horror Campaign for putting on an enjoyable double bill of this and Night Of The Demon... if they do any more of these events you should get yourself there. The atmosphere of watching these kinds of movies with like-minded individuals is worth the price of admission alone.
Posted by NUTS4R2 at 18:09 2 comments:

Night of the Demon

Labels: Casting The Runes, Classic Horror Campaign, Drag Me To Hell, Night of the Demon

Horror - 333 Films To Scare You To Death 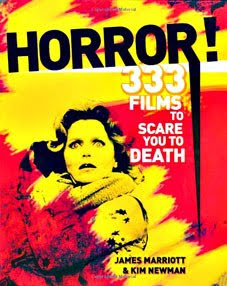 The Book Of Eli

The Sydow House Rules
The Magician (aka Ansiktet) Sweden 1958
Directed by Ingmar Bergman
Criterion Collection Region 1
I’ve had a thing for Bergman for a while now... ever since I saw some early 40s films by him on BBC2 a couple of decades ago. That being said, however, I’ve not seen that many of his movies... probably less than 20... but each time I start watching one I am quickly reminded of why I enjoy his films so much. It’s always a combination of blindingly beautiful shot compositions mixed with a quite often stark or bleak attitude emanating from the characters... even when those characters are in a good mood.
Thus, The Magician when I watched it the other day, was an instant turn on as soon as the credits had finished rolling. Picture perfect shots involving dark shapes of horse, cart, tree and lone figures draw the eye in and it’s interesting just how different and magical each subsequent closer shot of the same set up is from a different angle. It may well be a case of moving the camera around and then moving the props, sets and actors slightly to maintain a balanced composition from shot to shot and hope the audience doesn’t notice... but either way it works quite well.
The film follows a travelling magician, played as brilliantly as ever by Bergman stalwart Max Von Sydow, and his entourage who must persuade censorious local government officials that their show can do no harm to anyone... by staging a performance for a select few who are in power. Most of the movie takes place under the confines of a kind of house arrest leading up to the performance and then dealing with it’s aftermath... but it’s not all doom and gloom as there are, as often with Bergman, sharp scenes based on tart humour (some of the verbal tussles such as the shifting who’s seducing who game between the magicians coach driver and a maid in the house reach almost slapstick proportions) and the lighter, or at least lightly perceived, sides of human relationships.
That Bergman is able to take these rather wild shots of humour and pitch them, especially towards the later parts of the movie, against scenes of bleak despair and the crushing weight of humanity such as the darkened workings of the magician’s psyche and his wife (played here by another cornerstone of what was then Bergman’s regular bunch of actors, Ingrid Thulin) without making them jar or feel like the pacing is in any way off... is just another sign of the absolute craftmanship that Bergman demonstrates in his theatrical features.
The Magician is seen in almost three guises in this movie as the character is revealed to us little by little, starting off with a fake bearded cypher of a man who exudes confidence and mystery... the actor is stripped bare later on when we see him with his wife (who is made up as a man as his young ward when travelling the roads) and we see how much he loathes what has become his profession and his lot in life. This image is further confounded right near the end of the movie when, before a moment of triumph which trumps and almost throws away the value of all that leads up to it, he is seen as a pitiable performer begging for his wage so that he and his wife can eat.
The Magician and his show are both a product of illusion and trickery and yet... it also becomes clear that he is able to genuinely mesmerise people which no amount of explaining can do. Further dimension is added to the film in the presence of a genuine witch who brews the various potions which the travellers sell to people and it is clear that she is blessed with magical powers including the power of prophecy. She plays in sharp contrast to the “manager” of the company who regrets her being with them and who insists that he do all the talking on behalf of everybody.
The film is quite stark and powerful and quite even toned throughout it’s running length, in spite of said juxtapositions of light humour and dark despair, but towards the end there is a scene which takes on an almost Bunuelian atmosphere as the film switches to one of the characters having what can only be described as, and attack of surrealism... courtesy of the combination of mesmerisation and chicanery brought to the table by Max Von Sydow. And then the end sequence, just as the motivation and plight of the characters has hit rock bottom, suddenly gets... well I don’t want to spoil the punch line to this little chamber piece but let me allude by mentioning the film’s musical score. What plays throughout the film as a very spare and "even" take on understated gloom suddenly turns into a fully fledged Nina Rota-like carnival score. Seriously, I was almost expecting the ending to be a forerunner of Fellini’s Eight and A Half when it suddenly changed tone.
This film is definitely Bergman on full form with a series of crisp black and white images of simple beauty enriched with the consummate acting talents of Sydow and his contemporaries and a lightness to counter-balance (but not to its detriment) the deft exploration of the depths of the human soul... peppered by the odd surprise which will keep the first time audience on its toes.
As is to be expected, the Criterion edition boasts an excellent transfer of an excellent print and a few extras which will be of some interesting to Bergman’s followers. Another great job by Criterion of another minor masterpiece by Bergman which is well worth your time if you are a lover of film in general.
Posted by NUTS4R2 at 17:20 No comments:

Doctor Who: The Impossible Astronaut 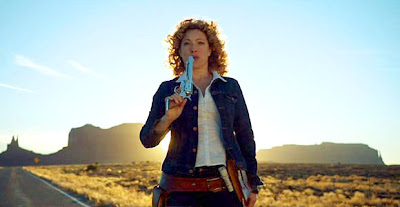 Labels: Jamie Bell, The Eagle, The Eagle of the Ninth