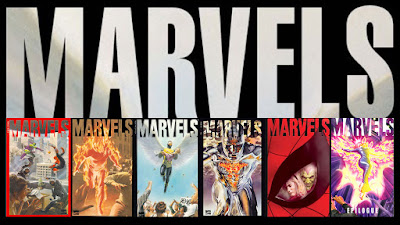 Heroes In A Half Sheldon

I can’t remember why I’d stopped reading comics for a while by the time I was studying for my degree but I do remember when I got back into them. It would have been around 1994 and I was off work for a long time with a condition known as Repetitive Strain Injury (or RSI for short). Personally I didn’t really believe in such things until I woke up one day and realised I was unable to move my arms without having searing pain. It took an awful long time to finally get them moving again but, during that time, holding a paperback book open to kill the time while you were supposed to be recuperating was nigh on impossible. Comics, on the other hand, were floppy and almost weightless in comparison so, it wasn’t long before I started back on those again for a fair amount of time. I remember what made me give up comics the second time around but... that’s another story.

So by this time I had already read the ‘new classics’ of the genre back when they first came out... stuff like Watchmen, The Dark Knight Returns, The Killing Joke, Maus etc. However, there was one brand new classic (and we all knew it would be considered as such) which, handily, coincided with my recuperation and that was Marvels. I remember buying my first issue... they were fully painted artworks, just as you might have found in issues of Blood - A Tale, Epic Magazine or Heavy Metal... but the covers had acetate overlays for the typography and so on because they wanted to keep these so you could see the front cover unhindered by all that stuff if you so desired. They looked fantastic and, as it happened, Kurt Busiek’s writing matched the superb art by Alex Ross in every way possible. It was one of those dream comics where everything seemed to synch up perfectly.

There were four issues plus a kind of prologue zero issue which was a teaser that detailed the creation of the original Human Torch in 1939 from his point of view, as a lead in to the actual four part story told from the vantage point of photographer Phil Sheldon. And what it actually was... was a potted history of the Marvel Universe from its beginnings in 1939, right up to the notorious Death Of Gwen Stacy story arc in 1973. The heroes themselves were not the focus of the book... that is to say, they were but they were only seen on the periphery of famous events in their fictional lives as Sheldon takes his pictures and, over a lifetime career, writes a photo journalist book on these ‘Marvels’.

It was a moving comic book and detailed Sheldon’s own personal tragedies and celebrations but always in the context of the bigger picture... a picture that the audience were sometimes much more aware of than a lot of the actual characters, which is something Busiek did really well in his writing. For instance, Sheldon hated a photographer called Peter Parker because he was always selling pictures to J. Jonah Jameson to make Spider-Man look bad. So, yeah, the irony of a lot of the situations is also something which is used to add drama and sometimes suspense to the plot of the comic. There’s also a big exploration of the themes of mutants and how the human race perceives them which makes for a lot of drama.

Lovely references and characters are weaved into the fiction... as in the zero issue which had Professor Horton working on the Human Torch in a laboratory filled with Kenneth Strickfaden style props to bring parallels to Universal’s 1931 version of Frankenstein. And wonderful little cameos who would grow to be slightly bigger characters in future chapters... not to mention in the lives of the Marvels, such as the young reporter friend of Sheldon’s in 1939 who some day wants to run the Daily Bugle. No ‘Marvel No Prize’ for figuring out who that is.

And there are also a lot of non-Marvel characters and references in the book, for those eagle eyed among the readers who are paying attention to just how far the artwork can stray into protected copyright area. Some of it is more apparent on this second read through. For example I always spotted a sailor who looks the dead spit of a real life Popeye and, similarly, the young newsboy Billy Batson (aka SHAZAM... The Original Captain Marvel). It took me until this second go around, though, to recognise Clark Kent and Lois Lane in the various press meetings and events in the first issue. And how I missed Doc Savage I’ll never know (or maybe I didn’t and just forgot about it in the intervening decades).  It’s also nice to spot wedding guests like The Beatles at the wedding of Reed Richards and Sue Storm.

Okay, so what I didn’t know until just recently is that there have been a couple of sequels to the original classic. Both written by Kurt Busiek (and I’m not getting into his alternate universe sideswipe look Ruins here... that will be for a different review) but with the first sequel, Marvels - Eye Of The Camera, being co-written by Roger Stern and artworked, in a similar fashion, by Jay Anacleto.

To be honest, Eye Of The Camera is pretty much a retread of the same story and style. Starting at a point in one of the earlier comics, the first issue catches up to itself later on and carries on from where the previous series ended... after Phil Sheldon’s ‘retirement.’ Although he still does some freelance stuff to help secure his kids’ future, this is about him rushing to get a follow up book to his best selling 'Marvels' finished, once his cynicism is abated after he is rescued from a mugging by Spider-Man. The reason he’s rushing is.... well lets say that fairly early in the book he finds he has cancer and starts hitting the chemo while trying to get the work done in spite of it. The real drama from this one comes when you try and figure out which ways Phil could possibly survive what’s happening to him and the skill of the writer as he presents a small possible hope for the character before... no, you need to read this yourself. The art and writing in this are fine but it seemed, despite its dramatic impact at the end, somewhat ‘less’ in many ways than its predecessor. In other words... Marvels was a classic. Marvels - Eye Of The Camera... isn’t.

And so we come to the latest and, very recent Marvels - Epilogue. It’s very skimpy on page count and presents a little mini chapter from a time which is set somewhere simultaneous to the events in Issue 2 of Marvels - Eye Of The Camera, apparently. There are some classic comic book history homages, once more, painted by Ross but, ultimately, this doesn’t seem like any kind of a prologue to me... and I wouldn’t read it as such. This one slips quietly into the overall scheme of things but I didn’t get much of an emotional hit from this one at all, alas. Given the themes of the previous books about the way humanity treats the special saviors that are the ‘Marvels’ of the titles, this one seems fairly slight and, frankly, not an essential read. I mean, sure, it’s nice to look at... it just doesn’t really have any substance and not much more to add, in terms of commenting about the characters and their drama within the bigger picture. We’ve already seen that story play out in full so it kinda diminishes the impact here. This one almost seems like a pure exercise in grabbing money from the memory of the original, I’m sad to say.

So in conclusion, the original Marvels is well worth anyone’s time to read. It’s one of the greats and if you are into Marvel and the history of the characters, then you will find this an essential purchase. I will be reviewing Marvels Companion which reprints the various painted Marvel comics which were influenced by the look and writing style of Marvels in a forthcoming review (and that will include Phil Sheldon’s alternate timeline as told in the aforementioned Ruins). Until then... ‘nuff said.
Posted by NUTS4R2 at 17:14