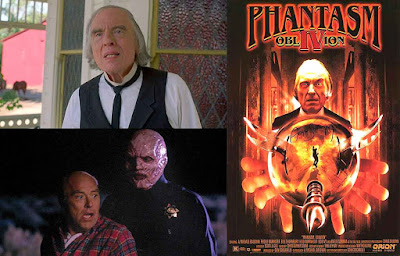 Balls To The Wall

Warning: Sorry but there will be spoilers on this one... I want to talk about what Coscarelli does with the ending here.

So... only four years after the previous installment in this film series (you can read my review of Phantasm III - Lord Of The Dead here) we have the fourth and, what I expect many people thought would be the final one in the series... even though the ending is, to a certain extent, left on the usual style of cliffhanger.

The film more or less picks up where it left off, with Reggie Bannister’s character Reggie voicing a recap montage of the events of the previous movies. Then we carry on with the new ‘ballified’ version of Mike, played again by A. Michael Baldwin, driving into the desert on some kind of bleakly surreal quest and with Reggie, still pinned to the wall by the spheres. The action carries on with Reggie and Mike spending most of the movie apart, doing different things. And we have the rematerialising, manifestation of Mike’s brother Jodie, once again played by Bill Thornbury, being much more sinister and perhaps not as helpful as he might at first appear here.

Reggie’s character is pretty much in it to provide the action scenes as he speeds across the desert trying to catch up to wherever Mike is. There’s a nice sequence where he battles a kind of zombie policeman which ends in a vehicle explosion and that provides almost a running gag in the film on this one... there seems to be an abundance of exploding vehicles in this. Including the one that explodes after Reggie breaks the window of a newly rolled over car to drag out the lady trapped inside. When they end up in an old shack for the night, Reggie is back trying to get into the young ladies affections... although not as strongly as he was with the Roxy character in the previous movie.

We then get the scene that I’m sure many Phantasm fans had been waiting a long time to see. As she’s sleeping, Reggie notices the young ladies bosoms are heaving just a little too oddly underneath her nightgown so he quickly undoes the item of clothing to check out what’s going on and, sure enough, her breasts have turned into Phantasm balls which promptly fly around the room chasing Reggie. One even manages to drill through his hand as he tries to stop it gouging its way into his head before he destroys it with a tuning fork. I think it’s nice that Coscarelli has gone back to the tuning fork idea on this as it was a prominent part of the ending of the first movie, if memory serves, although if it was as effective as a weapon as it is here, you have to wonder why our heroes never thought of it before.

Meanwhile, Mike is on something of a philosophical pilgrimage through both the desert and different time zones via the tuning fork gateways. We see a lot of flashbacks throughout the movie but it’s especially clear, in one scene where Mike tries to end his own life and it flashes back to the events of the first movie, that Coscarelli must have shot a lot of unused scenes for that first film which never made it into the final cut. He makes good use of them here though, which is riddled with ‘new footage’ of the four main actors when they were much younger men.

The fourth actor I am referring to, of course, is Angus Scrimm who, once again, takes up his duties in the iconic role of The Tall Man and, also, we find out his real name... Dr. Jebediah Morningside. So the Morningside mausoleum in the first movie was named after him... retrospectively, I guess. As Mike visits Dr. Morningside in his past, we get a little taste of what his back story around the time of the American Civil War was and how, and why, he invented the portals to another world in the first place... so this is nice stuff and we get to see Angus do something a little different with the role in this one.

Of course, by the end of the movie, everything is so surreal and disjointed... deliberately so, I think it’s fair to say... that you have no real idea of what’s going on or why events are being allowed to play out in the order they are. Which is something of a modus operandi for the series, as far as I can see.

I talked about the use of flashbacks and while it’s immensely satisfying to see the same actors at various ages playing the same characters, there’s also one thing which Coscarelli does with them which, on reflection, is simple but it’s also quite special. There’s an element of this in a lot of the flashbacks but what he does very specifically at the ending of the film... after Reggie has jumped into another dimension to try and get help while Mike, the sphere extracted from his brain, lays dying on the desert floor... is finish the film on a flashback. Now I can’t remember if the scene the director chooses to end the film with is an unused scene from the first film or whether it was in there too but, it consists of the younger versions of Mike and Reggie sitting in Reggie’s car and driving. Michael hears an echo of himself from the future where Coscarelli has the sound of Mike saying he’s dying superimposed over the old footage and Reggie asks what the sound was. Now what it was originally supposed to be and why Mike has the wistful expression on his face, I don’t know, but the way Coscarelli remoulds the material to give it a much greater weight than was originally intended when the footage was initially shot nearly twenty years before, is kind of a special thing to do, I think. Making new connections with old scenes and giving them a meaning beyond what they originally had is something I’ve not seen that many film makers try before, to be honest.

And that’s me done with Phantasm - OblIVion for the forseeable future. It’s a film which disappointed me the first time I saw it but, approaching it now with the expectations a little lower allows the film to flourish more in my mind and I think, like the third movie, this stands up much better over the years than I expected it to. As with the previous movies... recommended to fans of the series but not really a good jumping on point if you’re a stranger to the Phantasm universe.

Well, now I’ve got this far I can see the possible jewel in the crown of Arrow's restored, Blu Ray box release... the debut of Phantasm RaVager, a recent film in the series which, with the death of Angus Scrimm back in 2016, I suspect really will be the last of the Phantasm films. At least in the form we know them in... I wouldn’t say a remake is out of the question at some point. So looking forward to reviewing that one here when I’m done. Thanks for reading.
Posted by NUTS4R2 at 19:29