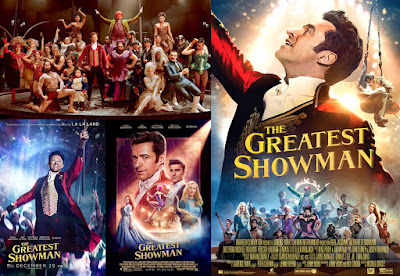 Ahh, Christmas time. That magical time of the year when you’re confronted by the ghost of watching films you really didn’t want to see because you bought them for relations who did. Such is the case with the musical motion picture The Greatest Showman, which stars Hugh Jackman as P. T. Barnum in what I can only describe as a somewhat sympathetic, rose tinted humbuggery version of that man’s life. I think the last time I saw a production about Barnum it was also big on sentiment and less enthusiastic about selling a more genuine embodiment of the spirit of the man but, that’s okay, I guess that kind of sensationalist pursuit is, in some ways, doing just that... in a roundabout way.

That previous time I saw a Barnum musical it was in 1981 at the London Palladium in a stage musical which was literally just called Barnum... and it had Michael Crawford in the title role (I think ex-Carry On star Jim Dale did it in America, if memory serves). And, though it’s not completely fair, especially since The Greatest Showman is in no way an adaptation or remake of that production, I shall do the obvious and make my one and only comparison to the stage show and say... I still remember some of the songs from the 1980s show. The songs in The Greatest Showman seem, somehow, a little flat and unmemorable in comparison.

That being said, I’m going to hedge my bets here and remember I gave a disasterous review to another recent musical, La La Land (you can read it here if you like), only to discover that, once the songs were stuck in my head, I absolutely loved the movie from my second showing onwards and would happily screen it for myself every year if there weren’t so many other movies to watch. And, seeing as I didn’t hate the songs in The Greatest Showman, I’m guessing that they will soon grow on me if I heard them again so, although I’m not likely to get to it anytime soon, I suspect that if I’d waited and wrote this review after a second viewing, it would be more favourable than what I’ve got to say about it this first time around. So sorry but... first impressions will just have to do.

Those impressions being that... it’s not a bad film. It has some nice segues from one scene to another and some clever choreography on some of the musical numbers... such as the scene where Jackman’s Barnum is trying to persuade Zac Efron’s character to join forces with him in a dance at a bar with flying glasses and bottles... or a sequence where Efron dances with his love interest, played by Zendaya using the ropes of her profession as a trapese artist.

And the performances are all fine too... especially Hugh Jackman, who I always find is worth the price of admission, so to speak. Michelle Williams is equally sparkling as Barnum’s wife Charity and Rebecca Ferguson fairly twinkles as famous singer Jenny Lind. There’s also an edge to the writing in terms of giving the characters a less predictable nature and by far my favourite character was a critic who seems to have hated Barnum but here, it seems, is given a little more three dimensionality in terms of the way he reacts to situations and he’s wonderfully brought to life in this by some guy called Paul Sparks. So all well and good and... combined with some nice colour palettes and some beautiful sets... part of me thinks I should maybe have gone to the cinema to see this one.

However, my main problem... and I can see how this could always be a problem when cinematic fantasies have one foot in reality such as biographical pictures... is that the plot seems absurdly simple. This film has less twists and turns than a Roman road and, while I should probably be applauding simplicity in modern cinema... I don’t know, it just seemed to me like there was no real drama to get my teeth into here, no matter how good the performances were. And they were very, very good.

I guess that, while I did invest in the main protagonists to some extent, I never felt like there was much at stake for any of the characters and I just didn’t feel the need to root for them enough. Which is a shame because there was obviously a lot of time and care put into this production. However, that being said, I’m one of only three people I know who didn’t think it was all that people had said it was (my two viewing companions were of the same opinion as me on this one) and everywhere else... well, I’ve not heard a bad word said about it and it’s been very successful. So I’m kinda glad about that since there’s obviously no small amount of work gone into bringing this tale to the screen.

And that’s me done, I’m afraid. The Greatest Showman didn’t really inspire me as much as it might and I wouldn’t whole heartedly recommend it to anyone... much less those who don’t like musicals (I love musicals myself). Not, quite, my cuppa tea but I suspect I may get turned around on that if I ever find myself plonked down in front of it again. Sometimes first impressions aren’t always right and, like I said... hedging my bets.
Posted by NUTS4R2 at 20:05