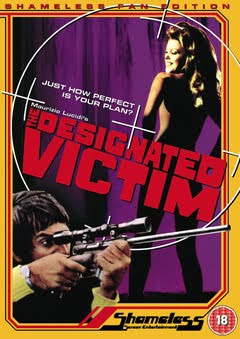 The Designated Victim 1971 Italy
Directed by
Maurizio Lucidi
Shameless Screen Entertainment
DVD Region 0
It was recently brought to my attention that Shameless Screen Entertainment (a label I shall be keeping my eye on in future) have restored and issued a definitive print of the 1971 Italian Thriller La Vittima Designata aka The Designated Victim.
Now this is not one I’d heard of before now but I decided to give this Italian reworking of Hitchcock’s Strangers on a Train a spin because, while it’s certainly not a giallo, it is definitely made at the right time and place to be easily confused with one... which is good enough for me. True enough, closer inspection soon revealed a movie incredibly infused with that specific, haunting style of film-making. Stylistically, this one definitely skirts around at "the giallo’s edge", so to speak.
This movie stars the one and only Tomas Milian (cuchillo in The Big Gundown and Run, Man, Run) as Stefano, a man who is having troubles with his career ambitions (in the form of his wife). When he is out with his mistress they bump into a strange man, Matteo, in a series of chance encounters. Matteo is played by Pierre Clementi, not an actor I really know but who appears to have a very interesting, on screen charismatic personality and who isn’t, quite surprisingly, overshadowed and upstaged by the on screen “method” antics of Milian. Clementi looks, it has to be said, a bit like a willowy version of Russel Brand and plays the part with the kind of mannerisms that Johnny Depp does so well to get onto screen, and if they were to remake this film today you’d definitely need to get Depp to take on this role.
Ok... back to the plot. Matteo offers to kill Stefano’s wife if Stefano kills Matteo’s brother. Stefano obviously doesn’t really agree to this, although you can see he is tempted. Alas, the inevitable eventually happens and soon Stefano’s wife is found strangled in their apartment, murdered by Matteo. And Matteo, of course, has gathered and fabricated enough circumstantial evidence to blow big holes in Stefano’s own alibi for the murder. There are some slight twists and turns which most people, especially those familiar with various gialli, will see coming long before they happen and before long you’re at a fairly predictable ending to the film... but what fun getting there.
A pseudo-Bach chamber score by Luis Bacalov (of Django fame) lends the film a certain vitality and pacing in some sequences where it's needed and some of the shots in this movie are amazing (as to be expected in most of the gialli I’ve seen... even though this isn’t one in the strictest sense). There was one moment in the movie where a high up camera angle takes in a whole living room which is blue with orange furniture and with two doors open, one leading into a pink room, that positively had me bouncing up and down in my seat. The wonderful balance of eye-joggling colours framed perfectly on the screen was like eating an extra helping of dessert!
Shameless, the label behind this and some other vital, uncut UK releases have painstakingly rebuilt this movie and issued it in something which is probably the best print to hit the streets since the movies initial release (I’d go out on a limb here and say it’s probably in a more complete form than many countries ever had the privilege to see it in). This label is doing a great deal for fans of the giallo film and its nearest celluloid cousins and if you are at all interested in this kind of movie then you owe it to yourself to pick up armfuls of their releases and keep this label in business. They’re doing some sterling work.
If you are a fan of Tomas Milian you are in for an extra treat... he sings the song “Shadow in the Dark” in this movie! Add this movie to your backlog pile today!
This and other titles can be found at www.shameless-films.com
Posted by NUTS4R2 at 18:58