The Lives and Times of Jerry Cornelius 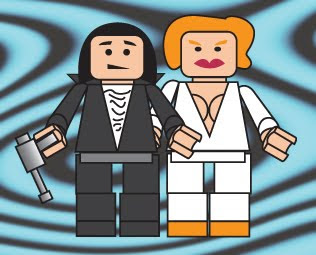 Last night I was fortunate enough to be in the audience for a rare cinema screening of one of my all-time favourite films... Robert Fuest’s The Final Programme. The film showed as part of the British Film Institute’s “flipside” strand of screenings and was attended by the writer of the source novel, the one and only Michael Moorcock... a science-fiction and fantasy legend for many of his readers (this one included). I’d like to take this opportunity to thank the BFI http://www.bfi.org.uk for giving the general public at large this rare screening.

The Final Programme is a very special film to me... it is a film which was responsible for changing the way I think about things... that is to say, it changed the way I see life and the attitude through which I try to negotiate the challenges of surviving in the “modern” world. Hmmm... enough of that for a moment... let’s get to the film...

The Final Programme is a fairly low budget affair but it really does look like dynamite due to Fuest’s “design” of the film. Based on the first novel in Moorcock’s sequence of Jerry Cornelius stories (another incarnation of Moorcock’s Eternal Champion) it is actually, in my very humble opinion, not that far removed from the tone of the book. Mr. Moorcock was on hand to once again tell the audience how much he hates the movie but I’m still surprised that his attitude to this hasn’t mellowed over the years because I think this film really isn’t THAT far removed from the original novel. Certainly the scenes left out are real humdingers but you’d need a much larger budget to be able to bring some of that stuff to life and I’m really not sure a cinema audience would have been any more appreciative.

It’s been years since I read the novels and I love that in The Final Programme, for example, Jerry Cornelius can throw a party and it lasts for a year or two before everyone goes home... but trying to do that on screen would need an especially deft hand at the wheel. And I think a lot of the more overt sexual ambiguities would possibly have turned the audience off more, in some ways. The Hindu Professor Hira turns up in the film a few times in flashback, for example, but it is not made clear that Jerry Cornelius is also sharing his bed with him. And Jerry’s incestuous sexual relationship with his sister Catherine is only hinted at a few times in the movie, and then the references can be easily missed unless the audience is paying particular attention.

Certainly, there’s a lot to distract the attention of any audience to this particular film. The shot designs and general mise-en-scene is absolutely exquisite. There’s a long breathtaking tracking shot in an aircraft hanger as four people walk towards the camera, stop, start walking again and then turn with the camera still tracking them (over a space of several minutes) and I always wonder how they managed to keep the thing in focus quite so easily. Lots of low angle shots, shots through foreground shapes, psychedelic washes... The Final Programme has it all and in many ways the way it is shot reminds me of Sydney J. Furies excellent work on The IPCRESS File - a film which, at the time, was accused of being “over-directed”. Mr. Moorcock, who it has to be said was quite witty and entertaining in his marvellous Q and A session at the end of last nights screening, does not share my praise of the director... taking a lot of opportunity to run both him and the film into the ground, it has to be said. I can understand his attitude to some extent... after all, if something you worked hard on is “borrowed” by somebody else and then had things changed and bits chipped off it you're bound to get depressed... but you know what... if it wasn’t for this movie I wouldn’t have discovered the joys of Michael Moorcock's great literary legacy. After I first saw this film on TV in the early eighties, I spent the next year and a half scouring second-hand bookshops and putting together a selection of about sixty of the great man’s novels which I read back-to-back... eating and sleeping Moorcock while the rest of the world slipped out of my sphere of interest. So maybe he shouldn’t be so harsh on the movie... I’m sure I’m not the only fan he made off of the back of it.

The film is full, too, of epic, quotable lines... “Well it’s got to be a brain washing machine” and “Well, for a start, I'm going to sit here and get smashed out of my mind. And I also have it on very good authority that the world is coming to an end... so I thought I'd go home and watch it on television.” And it’s a cold audience indeed who can’t crack a smile at some of the novelties on display in this little piece of celluloid heaven.

It also has an absolutely gorgeous musical score by Paul Beaver and Bernard Krause which has never seen the light of day in any commercial format. This is a crime against all lovers of good music and a CD should be made available immediately. It even has saxophone solos performed by jazz legend Gerry Mulligan... I would have thought the jazz brigade would have at least ensured a release of this by now. I know the master tapes must still exist because crystal clear excerpts from the score turn up on the menus on the beautiful Region 1 Anchor Bay DVD of the movie... now sadly deleted but worth every penny if you can still find a copy. The commentary track between Robert Fuest and Jenny Runacre makes for fascinating listening.

So there you have it. My hero Michael Moorcock absolutely hates this film... but I think it’s fantastic and, still, way ahead of it’s time and without it I probably never would have discovered Moorcock in the first place. If you get a chance to see this quirky, underrated movie you should definitely take the opportunity... I watch this movie every year and never get tired of it. And thanks to the BFI, this year’s viewing was on a big screen with the author in attendance... it doesn’t get much better than that!
Posted by NUTS4R2 at 11:35