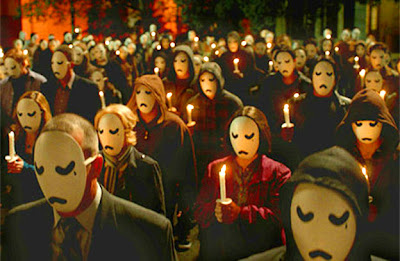 Love At First Night
Torchwood - Miracle Day Series 4
Episode 3: Dead of Night
Airdate: July 28th 2011. UK. BBC1
Okay, so here we are at week three of the new Torchwood reboot and it's just beginning to look like it's a proper piece of sci-fi storytelling again as opposed to a series of set-pieces cobbled together with some loose threads. Not to say that their aren’t some really obvious “event sequences” thrown in for good measure, but the tone of this one was pretty level and despite the obvious loose cannon of Rex (who I’m sure will be dead by the end of the series anyway, if the new Torchwood team are successful?), the team seem to be working together as a whole and even Rex returns to the fold once he is reminded of the gravity of the situation.
So what have we got here then? Well, for one thing we have the slow, cross-cut plot details emerging like a photographer might develop a photographic print... and that print, in this case, is of a story with a lot of texture and detail in its telling. The various points coming across are beginning to seem that they were written for a modern comic book rather than a movie... and by that I mean to praise Torchwood, not bury it. It’s long been my belief, based on the evidence of comic books in the last 25 years, that the comic book medium is the place, of all the “visual based” media, where a writer will get the opportunities to tell richer and more adult minded tales... and by that I don’t mean “adult” as in “porn” or “violence” (I personally find the “adult” euphemism to be a curious contradiction when used in regards to the actual childish sensibilities on display in a lot of gory/sexy movies) but “adult” in terms of tackling less juvenile issues with a healthy attitude and a structural template which will allow these issues to be explored and re-examined over an appropriate period of time.
This week's Torchwood certainly lived up to these lofty aims with some very densely textured details and questions being aired as the mystery girl who is the link between Oswald Danes freed child killer and good gal Doctor Juarez leads us into one section of the story which will, inevitably and ultimately, bring these pieces into a direct crash trajectory with Torchwood.
Now there is someone who is making money off the plight of “the human race that can’t die” and this, in turn, makes you wonder about the assumed “alien nature” of the new human condition, with Torchwood assuming an extra-terrestrial cause to the woes of mankind. But by the same token, it’s hard to imagine what, if anything, could have brought about this new condition other than alien intervention. Now, if I was an optimistic type and believed in artistic synchronicity between different aspects of an artistic property with no worries about the time factor, I would by now be thinking that the Owen character from the first two series of Torchwood was about to make a Lazarus-like appearance and be the obvious point of solution for the team... “oh, living-dead boy Owen has managed to resurrect himself from radiation meltdown after all... yay. Oops, he accidentally did the same for the rest of the planet in the process... oh well.” Unfortunately, I don’t think it’s that either so I’m pleased to say that three episodes in, I’m still in the dark. I don’t expect to stay that way for very long, but for now I’m happy.
This week’s set piece was the intercutting of two unnecessary sex scenes into the mix... not that I’m not a big fan of unnecessary sex scenes (who isn't), it’s just that these weren’t much fun, to be honest. That’s one of the few negatives on the show right now. Less sex and more nudity please!
The differences of English and American culture are dutifully pointed out by the new Esther character, who I’ve realised has been included just to point out these semi-amusing quirks of cultural divide and also to be the person the others can explain things to so the "whole" audience have no excuse not to know what's going on. Yep, Esther wins my “exposition gal of the month” award... or would if I had such a thing.
I’ve started to notice the camera work a little more now and they’ve gone for that thing they do a lot in Firefly and Battlestar Galactica with a constant, though mostly unobtrusive, hand held style which just follows the action and reacts to characters as they say or do something by honing in on them. Kind of like a cinematographic version of musical "Mickey Mousing" on a soundtrack... it will catch every slight action and nuance and that’s its job. Not very inspiring perhaps but mostly effective although, I have to say, I’m getting just a little bit fed up with it. Not very fair of me, I know, since its obviously a valuable item in the moving image toolbox. I’d rather see a little more smoothly paced and perfectly framed action I think, but confess I am kinda getting on a bit now.
So far, so good though and I am much more encouraged that this is going to be a good series on the whole... although the ratings seem to be going down accordingly and apparently there’s no guarantee (or even much likelihood if I’m reading the news stories correctly) that there will be a fifth series of the show. Which is unfortunate as I’m still waiting to see how Captain Jack ends up as a disembodied head in a jar for countless millennia! Maybe I’ll never know.
Posted by NUTS4R2 at 11:45