The Sarah Jane Adventures: The Curse Of Clyde Langer 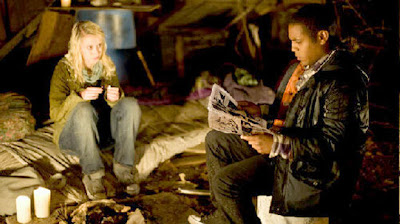 The Ballad of Rani & Clyde
The Sarah Jane Adventures Season 5
Episodes 3 & 4: The Curse Of Clyde Langer
Airdate: October 10th and 11th 2011. UK. CBBC
Warning: This review is cursed with spoilers.
Well I know this review is a few weeks late but I have to say that I’m just getting more and more impressed with each new series of The Sarah Jane Adventures. It’s been far more consistently entertaining than the show it spun off from of late (Doctor Who) and it’s modestly been collecting its usual top spot ratings for children’s TV in the UK, ousting the competition by a wide margin still.
The Curse of Clyde Langer is one of the best installments I’ve seen in the show and it’s really a shame this half series is its last hurrah as I’ve noticed that the writing has just started to address social issues more with this episode and this helps to give it another edge over some of the lesser things we’ve seen passing for quality TV entertainment this year. This is a stance which seems to have carried on into the next (and last ever) story in the show and it just makes it all the more poignant that the wonderful Elizabeth Sladen died when she did... not only is it a great loss of a well loved human being, she was also someone who was doing quality and (dare I say this dirty word in modern society) educationally enlightening work and bringing it to the masses in a show which has now started posing questions which will hopefully make the younger viewers (that’d be the viewers who, unlike me, can remember seeing Sarah Jane the first time around when she stormed onto our screens opposite Jon Pertwee’s incarnation of The Doctor back in 1973) start to think a little more about their everyday lives other than what new video game is coming out and when the next meal is.
The Curse of Clyde Langer does, to be fair, feature some typical formulaic Sarah Jane plotting in that some of it is set in a museum, while featuring an ancient and probably “alien” evil entity changing the way characters relate to a certain regular character etc. For all that though, it is carried off with the usual panache that you would expect from a typical episode of the show and the boy who plays the comic relief/streetwise character Clyde Langer, Daniel Anthony, demonstrates what a great little actor he can be with this kind of material and I fully expect to be seeing him on TV screens in all sorts of roles for the next 40 or so years.
Another great thing about this particular show is that, unlike Doctor Who for instance, there is time taken to re-establish and then progress the characters in a particular direction... Luke has left and is now at University with K9 for instance... and this is demonstrated nicely again in this episode where Clyde continues to pursue his interest in drawing and writing comics and this becomes very poignant when, after being ostracised by all his friends in this episode, he befriends a homeless girl and uses the pages of his latest hand drawn and inked comic to burn for a fire.
During an early sequence in the episode, Clyde gives a girl who is begging in the street some money and so, when Clyde is rendered homeless and persecuted by a curse caught from a living totem pole in the local museum, the younger audience can learn the lesson of “give unto others and ye shall receive” when the same girl takes him under her wing and begins to develop a romantic attachment to him. And actually, the relationship which develops between the two characters is actually quite heartwarming and helps give the episode a real sense of edginess when Clyde has to temporarily abandon the girl to sort his life out, only to find she has been “taken by the Night Dragon”... which may not be as sinister as it sounds but leaves two characters broken hearted.
Part of me wonders if we would have been seeing more of this homeless character had the series progressed past episode 6 as planned. If so, it would have been another excellent way of continuing the well woven thread of continuity throughout the show and adding a sense of tension and release to the drama. Especially since everyone knows that Clyde and Rani are supposed to end up together... aren’t they?
Either way, I’m still saddened that the series comes to an end after the next story. It would be nice to see some of the characters spun back off from this guesting in Doctor Who (as they did during David Tennant’s reign as The Doctor) but I suspect there’ll not be much time for these periphery characters given the current climate of the “mother show”, what with all those great, long, muti-season story arcs. Still... one more story to review and that’s the end of my The Sarah Jane Adventures reviews methinks... unless any readers want me to grab the DVDs and rewatch/review the ones which aired before I started writing this blog. Any takers?
Posted by NUTS4R2 at 19:13