Doctor Who - The Sontaran Experiment 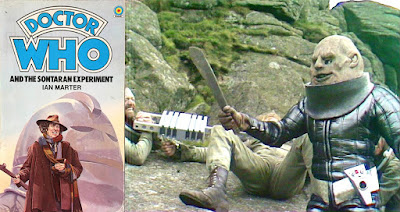 So following on directly from The Ark In Space (which I reviewed here), we have The Sontaran Experiment. This was Kevin Lindsay’s second go at playing a member of the Sontaran race following their debut in the previous season opposite Jon Pertwee’s Doctor in The Time Warrior. It was also his last... as the costume apparently aggravated his heart condition, causing his death some months later. However, before he died he really established a performance and manner of speaking as a Sontaran which various actors continue on to this day.

This one is, it has to be said, a mostly deadly dull affair so, thank goodness it only lasts for two episodes. In fact, it’s one of only a handful of classic stories which last that short running time in the first quarter of a century of the show. It’s also one of the few which doesn’t feature the TARDIS in any shape or form since The Doctor (Tom Baker) and his companions are arriving at the future version of Earth (in the year 16087AD) via the matter transmitter on Nerva, so they can make some adjustments to get the crew safely recolonising the planet again.

Alas, a small team of people for a another colony are also roaming the planet trying to survive a lone Sontaran and his highly dodgy looking robot who is running an experiment on the ‘humans’ that he’s lured there, in order to see how they stand up to torture and pave the way for an invasion fleet. Nobody asks why the Sontarans want to invade an empty planet so... I shan’t either. There’s obviously an entirely good explanation of this that the show’s writers and producers decided not to share with the audience.

Sarah Jane was, of course, also involved in the previous Sontaran story so she is shocked at first because... well they all look alike to her and she thought that Linx had somehow managed to survive. Harry of course, played as always by Ian Marter (who also wrote the Target novelisation), has never heard of them which is unfortunate because, the three main protagonists actually spend most of the two episodes apart form each other and all doing different ‘side missions’, so to speak, to do their bit in defeating this lone Sontaran and eventually signalling to his superior officer in space, also played by Kevin Lindsay (it’s not like they’d made more than one Sontaran costume for this production anyway), that the Earth was not to be trifled with.

And it’s pretty boring, mostly. The dialogue doesn’t sparkle and, apart from some charming performances, especially from the well spoken Lindsay, there’s not a heck of a lot to recommend on this one. Also, despite being a family show, the amount of times torture comes up just makes it feel a bit unpleasant with definite shades of Nazi Germany being alluded to in terms of the experimentation of the title, despite the fact that it isn’t really that violent.

Tom Baker apparently broke his collar bone while making this one and, looking at the forest landscape filled with big dips in it (and I suspect it might also have been shot in a quarry too), it’s really not that surprising that somebody broke something. Out of all of the stories in this series, this one just feels like its padding, to be very honest, to help link up the overall arc of that season and bide time until the next, six part and much quoted story Genesis Of The Daleks.

The pacing isn’t great either. Yes, everyone’s got something to do but it all feels a bit lethargic and I did notice at least one or two scenes which kind of didn’t quite make sense and were almost non-sequiturs presented in the order that they were televised. I learned today that at least one scene was cut out after Tom Baker broke his collar bone so I have to wonder if that’s what caused some of the lines and character locations in this to be... I dunno.... slightly out of kilter with what comes before or after them.

Whatever the reason, this was certainly the last two parter in the show until Peter Davidson’s incarnation of The Doctor starred in Black Orchid seven years later. This makes it about as long as one episode of the modern version of the show but, even some of the clunkier episodes these days make this one look bad. Perhaps some of that is precisely because the actors playing The Doctor, Sarah Jane and Harry all such have good chemistry together. Put them all on their own and they can’t bounce off each other the way they did in the previous stories. It really shows here and even Dudley Simpson’s musical score can’t liven this one up. So... sorry for the short review but this really isn’t a story I would recommend unless you are making a point of watching this entire series as one, fairly loose story arc. Certainly the least interesting story of this season.