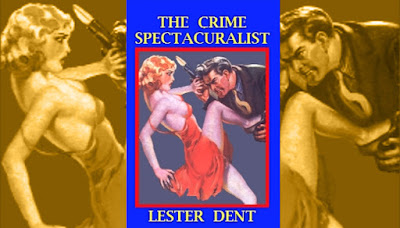 It was after I’d finished reading The Complete Stories Of Doctor Satan recently (reviewed here) that I checked out the publishing house, Fiction House Press, finding they had one volume of stories by Lester Dent. Lester Dent is one of my favourite writers in that he wrote, under the Street And Smith house pen name Kenneth Robeson, almost all of the initial run of 180 plus Doc Savage novels published in the Doc Savage magazine from 1933 until 1949 (I believe he didn’t write any of The Avenger novels, also accredited to Kenneth Robeson). Sometime in his second year on the magazine, he also found time to write three stories of an original character called Foster Fade, The Crime Spectacularist but, I guess once the Doc Savage magazine proved immensely popular and was giving his nearest pulp rival, The Shadow, more than a run for his money, he didn’t bother developing the character any more past these three, initial short stories which were published in All Detectives Magazine.

And I couldn’t find any useful information about the creation and conception of this character at all, so I figured the only way to do so was to find out for myself. Alas, even this jewel of a tome contains absolutely no introduction or preface to shed light on Fade... it just reprints the stories straight and unaccompanied... so I’m afraid I can’t furnish you with any real background to the character (although I believe another book by another publisher quite recently published an anthology of newly written Foster Fade stories... so maybe if I can hunt that one down relatively cheaply I can get some insight from that).

I can tell you briefly about these stories though, which certainly seem to have some of Dent’s interests scattered throughout. The three stories collected here are Hell In Boxes (from the February 1934 issue of All Detective Magazine), White Hot Corpses (March 1934) and Murder By Circles (May 1934). And in these we are introduced to Foster Fade, who is employed by a disreputable tabloid, Planet, as their special private detective known as The Crime Spectacularist. In that he goes after the more sensational cases so that his crime companion, the platinum blonde Dinamenta Stevens (mostly known as Din) can write them up in her lurid style. The two are both paid handsomely, which is just as well because, although he seems a little rough around the edges, especially in the first tale, Fade exhibits the same personality trait that was a big part of Dent’s personae and also, of course, of his more famous ‘science detective’ Doc Savage...

Being that Fade uses a whole host of new, scientific gadgets to help him fight crime, such as a periscope set up so he can see who is outside his office door from a screen on his desk or photographing the entire area around the Empire State Buiding with an infrared camera so that, when the film is developed, he can pinpoint the location of the missing Din from the tell tale ‘glare’ from the special infra-red headlights he installed in her car. He also wears a fine steel mesh undergarment so, like Doc Savage who wears something similar, he can stop any bullets coming his way if necessary.

The character is not very likeable in the first tale but he gets less ‘wise-ass’ and more interesting in the other two. It’s clear Dent is still developing the character as, in the first tale Fade is partial to cigars and, in the second one, we are told he never smokes (indeed, he does have a cigarette in his mouth in that same story but only because he expects trouble and it has a tear gas pellet inside which he is able to bang against a wall with his mouth when his hands are tied).

Like the Doc Savage novels, Dent uses opening hooks which lead to the revelation of something truly startling happening to various murder victims (in the case of these stories) but which are all explained as the consequences of ‘something scientific’ at the conclusion of each tale. So the White Hot Death is a result of exposure to liquid oxygen and the Murder By Circles is the venom contained in the bite of certain bugs or spiders when thrown at the victim. In the first story, he kind of fudges it where it’s made clear that the ‘murders by aroma’ are some kind of un-named scientific gadget.

The Crime Spectacularist stories are entertaining enough (although the first one is not great) but although Dent’s tell-tale signature is built into the stories, I’d have to say that these still don’t hold a candle to his wonderful Doc Savage stories, by any stretch of the imagination. However, I certainly enjoyed reading them and, if you are a fan of the pulps, you’ll probably have a good enough time with them too.