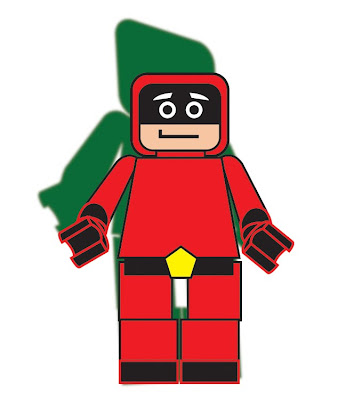 Superargo and the Faceless Giants (double billed as just Superargo with Wacky Taxi) 1968 Italy
Directed by Paolo Bianchini
Sceptic Cinema DVD Region 1
Woohoo! I finally get to see the sequel to the 1966 movie, Superargo Contra Diabolicus, and it’s so brilliantly terrible that it really doesn’t matter that it’s not quite as much fun as the first movie!
Before we begin, however, I should probably warn you that the title of this movie is, perhaps, a little less accurate than you may be prepared for in that the “faceless giants” in question have two big things wrong with them. Firstly they are not in any way giant sized, and secondly they all quite clearly have faces!
Still, you don’t mind a little inaccuracy here and there because these so-called faceless giants are actually robot-men controlled by a supervillain bent on... well I couldn’t actually work out what he was bent on doing... it didn’t seem to be a plot point that the film was in any way interested in divulging at any point. Or maybe I just wasn’t paying attention as well as I should have.
Unlike my recently reviewed Batwoman film which had the ludicrous plot of a megalomaniac scientist randomly kidnapping wrestlers and using their brain juice to create a race of fishmen, the second Superargo movie has a much more credible plotline, sensitive to the entertainment needs of the young Italian adults of the late sixties spending their hard earned cash on spectacles of this kind. No silly plots here. It’s firmly embedded in reality... the plot of this one involves a megalomaniac scientist randomly kindnapping wrestlers to replace all their internal organs and turn them into robot men (the faceless giants of the title). Genius!
Like the first movie this has lots of fist fighting and wrestling throws, bad dubbing, a Barryesque soundtrack and the odd deathtrap. It also has Aldo Sambrella playing an Indian guru sidekick who is helping Superargo make contact with his spiritual side. Just as well because, when he and Superargo are trapped in a cell which is rapidly filling up with cyanide gas, the two are able to induce a trancelike state and levitate up to the ceiling where the heavier than air poison gas can’t reach them. Phew, that was lucky! Had me worried for a minute.
While this second outing is nowhere near as entertaining as the first, it certainly does press all the right buttons that modern fans of this kind of cinema would want pressed. Unfortunately the presentation of this 2.35:1 film is actually framed in 1.85:1 cropped from this and the print is in absolutely terrible shape. Still, it’s probably the only way we’re ever likely to see this film presented now and while I usually shy away from watching a movie in anything other than its original aspect ratio, something this rare is worth making the odd exception to the rule for.
The Superargo films are Italian bandwagon rip-offs of the Mexican Santo movies... but they are done a lot better than the Santo movies were. A definite recommendation for fans of this genre!
Posted by NUTS4R2 at 14:54