Doctor Who: The Claws Of Axos 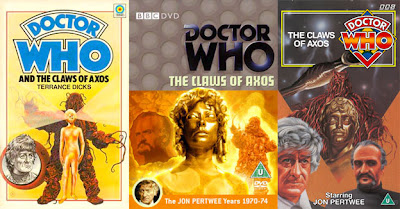 It’s Beginning To
Look A Lot Like Axos
Doctor Who: The Claws Of Axos
UK 1971
BBC Region 2
It’s been a while since I last saw the Doctor Who story The Claws Of Axos... I’ve not seen it since I was three years old in fact and did not, therefore, have much memory of it... other than the much reprinted photographs of the iconic creatures created for this story, of course. Seeing it again for the first time in 40 years taught me two things...
Thing One is that you certainly don’t have to have modern, tricksy writing, kick ass orchestral scores and increasingly long story arcs to be left with a fun, entertaining and attention grabbing science fiction story... these old episodes had some pretty good stuff going for them such as the relationship which had developed between the characters like The Doctor, his playful companion Jo Grant and their banter with other series regulars such as the U.N.I.T personnel headed up by The Brigadier and their long standing villain, who had been introduced in the Pertwee era, The Master.
Thing Two is that you really do have to beware of Greeks bearing gifts... or to be more precise... you really do have to beware of impossibly beautiful golden beings who are really hideous, red, energy sucking spaghetti monsters in disguise... bearing gifts.
That said, this is a pretty standard and simplistic piece of scriptwriting retelling the story of the Trojan Horse... but this time that Trojan Horse is a substance known as Axonite which is given to humanity as a gift in the hopes that it will be spread around the earth quickly through various representatives of different countries to enable the Axons to steal the energy from our planet. The success of this plan is challenged slightly when you throw in the political angle of a British Government who want to control the distribution of the Axonite themselves.
As I intimated earlier, pretty simplistic writing... but when you factor in the performances of the actors involved in selling this little story and the way in which their characters react to any given situation... then you have something which can be quite gripping at times.
Yes, it’s true the special effects on these ones, for the most part, were worse in places than many of the black and white stories that preceded the Pertwee era (and this tradition continued into later Doctor’s eras in an ever increasing trend for terrible effects work) but every now and again they got it right. Case in point, when a spaghetti Axon wipes out a fleeing soldier with its tendril and the soldier disappears in a wisp of smoke, I found it surprisingly hard (if not impossible) to perceive just how the “trick” in that particular trick shot was done.
It’s a shame the rest of the action and effects were a bit less solid though. When a jeep is blown up, for example, not only does it not blow up where the grenade was (hey, two charges from one grenade... impressive) but it also happens to be speeding down a hill when it’s doing it... that is to say, the jeep’s valuable engine must have been taken out and so the effects crew presumably had to push it down a hill to make it look like it was going fairly fast.
But, as I’m sure most of you readers will know, special effects do not a good story make! Roger Delgado’s performance as the original version of The Master still puts all future incarnations of the character to shame and his vibrant, evil and above all self-assured personality is easily as good, if not more believable, than even Derek Jacobi and John Simm’s incarnations of the role.
And, as I said earlier, the relationship between the characters is not all that simplistic. I don’t recall Jon Pertwee being this grumpy in the role before but certainly, for the vast majority of this story, he definitely plays the role as an “angry Doctor” who might well put William Hartnell’s original “grumpy old man” personae to shame. When The Doctor pretends to team up with The Master to escape the threat of the Axons and leave the earth to it’s fate so he can trick them into getting caught in a time-loop, you almost believe that The Doctor has turned into the villain of the piece... certainly his constant companions fall for it hook, line and sinker.
There are some nice one liners in the script and they’re not all reserved for The Doctor and his companions. Periphery characters who are only in it for the duration of this story (often to provide a body count of victims for the alien menace on hand) also get some interesting bits of dialogue and the whole thing comes across as a real ensemble piece. It keeps you watching when elements of the storyline become a bit tiresome and over padded.
So there you have it. The Claws of Axos... an iconic monster but not exactly a great story. That being said, however, it was certainly a pleasant change from some of the other stuff I’ve been watching lately and hugely enjoyable in contrast to some of the more earnest fare of modern television writing. Check this one out if you like a flamboyant Doctor and some iconic monsters puttering around.
Posted by NUTS4R2 at 19:59