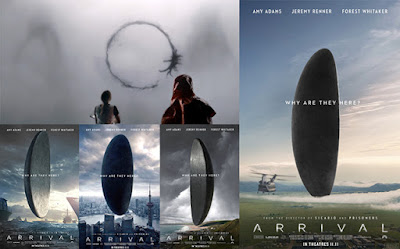 Warning: Although absolutely no spoilers are in here, the fact that I talk about the syntax of the film could result in slight spoilerage if considered for a while.

Arrival is an adaptation of a sci fi short story I’ve not actually read by Ted Chiang called Story Of Your Life... so I can’t say how it is as an adaptation. This expanded (presumably) version of the story is directed by Denis Villeneuve, who directed last year’s movie Sicario (which I reviewed here) and who, since finishing this movie, has started filming a seemingly unnecessary sequel to Blade Runner (reviewed here). On that subject, I guess if I had to name a modern director who could take on a sequel to what is, after all, the greatest movie ever made, I think Villeneuve may be a good one to trust. I wouldn’t trust Ridley Scott after the way he’s ‘revisionist butchered’ the film in subsequent decades and, especially after having seen Prometheus... which seems to take joy in holding up all that was great about his astonishing movie A L I E N and then destroying the memory of it.

Anyway, back to this director’s Arrival. It’s not too long ago since we had a big, conceptual sci-fi movie playing in cinemas but they don’t come along as frequently as some of the other kinds of films made in versions of the genre so this is kind of a welcome change from the plethora of superheroes and space opera movies which have been howling for our collective attention in recent years.

Now, the thing about high concept sci-fi films like this one is they, generally, live or die on the strength of the mystery which is hiding at their core and which is usually revealed at the end of the movie. More often than not, the audience will work the ending out way before they are supposed to on these kinds of event films and this is either because they are too obvious or because the director telegraphs (or is forced to dumb down because of studio pressure) the nature of the ending. Alas, while Arrival is a pretty terrific movie, it’s no exception to this rule but... I’ll get to that in a little while.

Okay, so what’s good about Arrival?

Well, a heck of a lot actually. Villeneuve has equipped himself with some fine actors in this one with the main protagonist being played by Amy Adams, who is very well supported by the always watchable Jeremy Renner. They are both in terrific company as they are backed up by a team of good actors, headed primarily by Forrest Whitaker and Michael Stuhlbarg.

The plot is very simple... Amy Adams plays Dr. Louise Banks, one of the United States’ top linguists, who is called upon by the military, in the form of Colonel Weber as played by Forest Whitaker, to try and communicate with an alien species who have landed twelve ships around the Earth at places where, apparently, Sheena Easton has had hit records. No, I’m not making this up and I did appreciate the odd bit of humour in what is, it has to be said... and this seems to be typical of this director... a fairly dry film. It’s a film that deals with big emotions but there’s something fairly distancing and clinical about the directorial style which mostly tends to render the emotional context as something which needs to be studied and observed rather than felt. At least that’s the way I react to Villeneuve’s work and I have absolutely no problem with this. Louise heads up the languages team and Renner’s mathematician character, Ian Donnelly, heads up another division and, every 18 hours when the ship allows some humans to go inside to make contact, the two are accompanied by military personnel to try and make some kind of breakthrough, for their country, as to what the aliens want and if their intention is hostile.

Of course, the world’s leaders are all conducting their own investigations with their own spaceships and, as tensions rise, Louise has to try and find ways to get the fragmented super powers talking again and to stop them from launching what seems an inevitable attack on the aliens, thus causing major disruption between the nations and possibly inviting death from the aliens. At least that’s what the story at first seems to be about if you are just accepting everything as it’s fed to you. I wasn’t but... yeah, like I said earlier, the film has a flaw and I’ll get to that in a minute.

Villeneuve, once again, gets the most out of his cinematographer by grabbing some really beautiful shots but the colour palette, asides from some strong reds near the start, is kind of subdued and neutral throughout the entire course of the movie. Everything looks very dialled down and flat although, in some shots, I did notice he tends to enhance a small part of the screen with a bright colour or striking object which, although it’s rarely the centre of your focus, does tend to balance the way the shot is received, it seemed to me. I’m not sure if that was a conscious decision to do that but, since these things take so long to light and set up, I can only conclude that it was.

However, despite looking like the cinematic equivalent of a page full of Helvetica, the shots are quite beautiful and, coupled with some very slow and fluid camera movement and less than speedy pacing, I have to say that it’s an immensely gorgeous looking film and it’s primarily on that basis, and the strength of Jóhann Jóhannsson’s riveting score, that I will be seeking this one out on blu ray so my dad can take a look at it at some point.

However, there’s some bad stuff thrown in with the good which I’ve been intimating all through the review and... well... the problem is this.

Arrival places the solution behind its mystery dead front and centre. There’s a pre-credits scene to this movie and I so wish the director had not included this because, even before the title to the movie comes up straight after this, I’d kinda figured out exactly where the ending was going. It was always going to be a possibility that the movie ventures into the territory that it does... and I’m trying really hard to not give away spoilers here people... but the director really tips his hand very early on in the proceedings with the opening sequence, both with the nature of Amy Adam’s voice over to this scene and, even more tellingly, in the way he shoots around a certain something, deliberately not revealing something specific through blurry cinematography. This immediately got my brain thinking about why certain visual clues had been hidden and, of course, once your mind goes down that track it’s not too hard to think of the best logical conclusion... or at the very least, the way the film is really playing out towards a similar conclusion if you’re not caught up in the director and screenwriter’s parlour games.

Villeneuve reenforces his folly in a much cleverer way than, say, M. Night Shyamalan might try and cover his obvious slips in his movies. What Villeneuve does here is structure the film and the frequency of certain styles of scenes so that they play out in a way that the audience will, for the most part, trick themselves into misinterpreting some of the information. It’s my long held belief that the complex series of visual signifiers that make up the syntax of cinema stick in people’s brains as youngsters after watching only a few films or TV shows. For instance with flashbacks (which work slightly differently in some cinematic cultures, I’ve noticed) or other such things such as two shots of people talking and cutting back and forth, making up a conversation, have very pointed interpretations. So, if you screw around with the way they are really as opposed to being perceived, then you can allow the audience to fool itself. The strength of the opening sequence in the amazing film Pleasantville, for example, relies on the audience thinking that two characters are having a conversation before a long shot reveals the punchline that they are both in different places and a conversation ‘with each other’ isn’t happening at all at this point.

The director of Arrival uses another long held cinematic tradition, which I won’t name here, to fool the majority of the audience as to a certain element of one of the characters and I suspect it might work really well on some people. The only reason it didn’t work on me, I suspect, is because I have an unconventional outlook on life and don’t take for granted a certain linear element of people’s lives that they tend to latch onto as a scientific reality. And that’s all I’m saying about that so as not to spoil things for you but, alas, I did find the main conceptual twist to be jarringly obvious right from the pre-credits sequence, I’m afraid.

However, it doesn’t matter. The thing is... Arrival is a startlingly good presentation of a concept that has been done in a fairly different manner quite recently in the cinema and certainly in a more light hearted manner by some films over the last four decades. The pacing might be a little too European for some audience members (which was clearly the case in the screening I attended where people were kicking the backs of chairs or going out for a little walk half way through) but it really is a stunning film and I, personally, didn’t get bored by it once. If you are into conceptual science fiction then you’ll probably want to take a look at this one. It’s a film with amazing cinematography, great music and some interesting performances. And if you do find it as obvious as I did in terms of never quite taking you by surprise, the film more than makes up for it in other ways and ultimately I found it to be an entertaining, if not entirely thought provoking, lollipop of a movie.
Posted by NUTS4R2 at 12:38