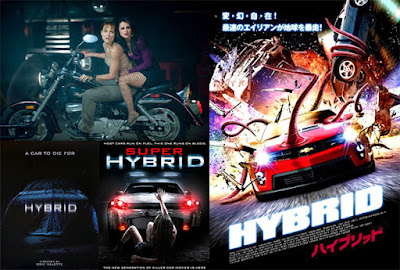 Okay... so this was kind of a cheap buy for me. £2.50 at the local computer exchange for a film I’d never even heard of but which promised to be something in the vein of Stephen King’s Christine or the brilliant ‘demonically possessed vehicle movie’ The Car (which I reviewed here). While the film isn’t as good or interesting as either of these two works, by a long shot, I wasn’t too disappointed with Hybrid and I think if certain elements could have been fixed (or had enough time spent on them), it could have been a truly great little genre movie.

The film starts off with a standard series of nicely edited and montaged panoramic shots of a city but one of the things I liked about this opening was the illusion of fragmentation on the score by Thomas Schobel and Martin Tillman, who manage to give the sound a disturbing, disjointed feel while still being absolutely dead on with the rhythm of the piece. Unfortunately, I have to say that this was really the only point where the film actually managed to impress me and it becomes an exercise in fairly competent, solid but ultimately unremarkable story telling after this point. Which is a shame because I feel the premise has such potential.

The film starts off proper when two people are lured into a car with an open door. They decide to steal it but, once inside, they realise they have made a mistake when the car eats them. A short while later, the same car has a road accident and is towed into a garage for repair. It’s in this multilevel garage that the rest of the film takes place, after first setting up the main female lead Tilda, played by Shannon Beckner, and her abusive boyfriend.

When Tilda gets to the garage to start her shift, we meet her boss Ray, played by Oded Fehr, and a load of other characters who seem to have the words ‘monster fodder’ written in invisible lettering on their foreheads. And, yes, it’s not long before one of them, a guy called Hector, falls afoul of the car and its bloody legacy of doom. The car in itself can change into any colour or model it likes and can self repair at will... except for in those moments where it doesn’t quite suit the dramatic situation, to be fair. Seeing as it can do this, one wonders why it’s in this garage in the first place but if it wasn’t in a confined area, then we wouldn’t be able to see it fulfil its aforementioned ‘bloody legacy of doom’, I guess.

So we have the usual tensions between the characters with Oded Fehr, who I had only seen play heroic roles before in The Mummy and Resident Evil franchises, set up as the main human bad guy of the story. He’s the one who, through his own trickery and willingness to exploit the situation once he’s realised that his employees are to be believed and they are all being hunted by a killer car, is the one you want to see finished off first. Given this, I was actually surprised at how long this character lasts throughout the running time (but I’m not going to give you any spoilers here folks).

As it turns out, the reason the killer car is able to do all this running over, maiming and eating of people is because it’s actually just a bunch of snakes inside. Well... okay... it’s not actually. That’s just what the hum drum special effects look like in certain sequences in this movie when they are trying to illustrate the ‘alien’ness of the car. In actual fact, it’s more like some kind of tentacled Cthulhu creature hatched from the pen of H. P. Lovecraft that has learned to perfectly imitate various motor vehicles with its chameleon-like stealth capabilities. When we finally see the thing revealed it’s not all that terrifying, to be honest, but I guess it’s not really trying to be, on some level.

Anyway, the film trundles along with the group of night workers in the multi-story garage barricaded in with the killer vehicle, for reasons I won’t go into here, and although the script is quite bad and the acting somewhat ropey in places, I thought it had all the right ingredients of being a perfect ‘late night around someone’s house with a few cocktails’ horror movie, to be honest. However, as I was watching it, with the director not quite managing to ratchet up the tension to the desired kilometres per hour, I couldn’t help thinking what a perfect movie it could have been in the hands of someone like John Carpenter or if George A. Romero had directed this thing. Not that the director does a bad job here... I just think certain story and dialogue elements could have been written better.

The film has all the genre cliches you would expect in it, for example. The lead female character who has a tainted reputation, due to a crazy past, which destroys her credibility when she is trying to get people to believe there is a hostile, alien, self-driven car on the loose in the garage. The guy who gets in the wrong car because it’s imitating the ‘safe’ car, which you are just waiting to happen at some point. The inevitable person who runs afoul of the trap that the humans have built to try and destroy the car, etc. Yep, all these and more come to pass and, to be perfectly honest, it’s not necessarily a bad thing that they do. However, the script is quite ‘by the numbers’ in this genre check box kind of way and there’s some incredibly atrocious dialogue for the artists to get through. Nothing is really done to exploit these kind of much loved clichés and raise the bar on them a little.

For instance, when Oded Fehr’s character finally starts to believe his staff about the exact nature of their four wheeled catastrophe, in that it’s a shape shifter, he replies quite straight faced... “You mean like one of those robots from outer space?” Um... what? Does this make any sense people? Is it a veiled reference to the Transformers movies maybe? I dunno, your guess is as good as mine on this one but it’s moments like these, and some of the pacing issues, which firmly place this film in the ‘flawed but relatively entertaining category’ as opposed to the ‘genre masterpiece of weird horror’ category the premise clearly deserves to belong to. Which is a great shame, to be honest.

And that’s about all I’ve got to say about this movie. Possibly a great thing to screen late on a Friday night with a group of friends when you are all equally sozzled but not quite in the ‘instant classic’ category I was kinda hoping for on this one. Certainly not the best killer car movie I’ve ever seen but for £2.50 for the Blu Ray, I’m really quite happy that I’ve seen it. Not a big recommend from me but if you’re a fan of horror in general, it’s something comfortable and non-challenging to while away an hour and a half with. Definitely a good item if you’re doing an all-night, home video movie marathon and you want something you can half snooze to. Worth a quick look but don’t expect any signs of unsung genius.
Posted by NUTS4R2 at 18:44