Doctor Who - Empress of Mars 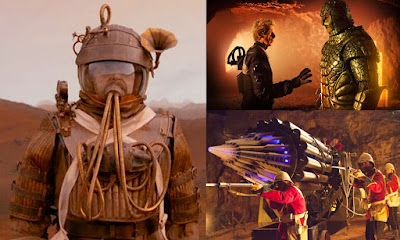 Warning: Some slight spoilerage about the appearance of a certain character here.

Okay, so that was surprising. After last series’ one truly abominable episode, Sleep No More, Mark Gatiss gives us new hope with one of the few, as it turns out, of the latest season’s non-dud episodes. There’s still a chance, I guess, that this isn’t a season with a majority of duff episodes... after the strong opening three... and I hope this episode is the shape of things to come for the remaining three weeks.

I have to admit I was dreading this after Gatiss basically ruined The Ice Warriors for me, who are the lead monsters this week, in a Matt Smith episode a few years ago by doing to them exactly what Ridley Scott did to H. R. Giger's majestic, dead space jockey creatures from A L I E N in Prometheus... made them a ‘something in a suit’. However, although said suitage is certainly mentioned again in this episode, it’s just a passing reference and we have more of the hulking menace of the original creatures who first went up against Patrick Troughton in the 1960s back. I believe, actually, since they were off our screens for so long up until a few years ago, that this is only the fourth incarnation of The Doctor they have come up against.

Okay, so the episode starts ‘fairly’ strongly (and it would have been a lot stronger without the preview trailer from last week) with The Doctor, Bill and Nardole dropping in on NASA. One of the few weaknesses of this particular episode is in this pre-credits scene, actually, because... why the heck did they drop into NASA in the first place? Anyway, NASA receives a photo transmission from one of their probes of the surface of Mars and, clearly spelled out in some rocks placed on the ground are the words... “God Save The Queen”.

So of course Bill, Nardole and The Doctor, who has somehow figured out, more or less, when those rocks were placed, travel back to Victorian era Mars and they are startled to find a bunch of Victorian troops stranded there, along with their “Man Friday”... a loan Ice Warrior. Of course, in traditional Tomb Of The Cybermen fashion, it’s not long before a small group (because, you know, budgets and costumes) of Ice Warriors being led by their Empress are locked in battle with said humans on the surface of the alien world. What’s more, Nardole has accidentally deserted with the TARDIS and can’t seem to get back to The Doctor and Bill, who are also stranded in this mess of a situation. So... can The Doctor and the ‘Man Friday’ Ice Warrior broker some kind of peace between the two races before the humans are totally wiped out?

It’s really great to have a ‘mostly’ stand alone episode of Doctor Who like this which works well as a short form story and the performances by all of the usual suspects sparkle and gives Gatiss’ words their due. I’ve always liked this kind of Victoriana science fiction style of story (I love the writings of Jules Verne and H. G. Wells, for example) and it seems clear the people involved in this episode must have done too. Big shout out to the costume designers and builders because the wonderful Victorian spacesuit with the nice old grammophone style speaking tube are a lovely bit of steampunk sensibility brought to the show. This is good stuff and the episode is fast paced and ingenious.

Also, there are a load of shout outs to things in this episode for fans of the art of the moving image to revel in. Not just movies such as The Terminator and The Thing but also some great nods to the history of the show too... as is becoming customary over the last few years in Doctor Who. For example, we have a lovely portrait of Queen Victoria which the human soldiers have brought with them to Mars and it’s clearly Queen Victoria as played by Pauline Collins (No Honestly, Shirley Valentine etc.) who played Queen Victoria in the David Tennant/Billie Piper episode about Victoria being trapped with The Doctor and Rose in a battle between king fu Zen Monks and a werewolf in the episode Tooth And Claw (an encounter which brought about her creating Torchwood, which Captain Jack Harkness, as played by John Barrowman, would later head up).

My favourite little nod, however, was something I saw coming just a second or two before it happened. There is a voice on a viewscreen and, just after, the image of the alien doing the talking is revealed. Yes, it’s Alpha Centauri, the ‘hermaphroditic hexapod’ who was a delegate involved in the delicate negotiations which also involved the Ice Warriors in the 1972 classic Jon Pertwee story The Curse Of Peladon and the not so classic sequel, in 1974, The Monster Of Peladon. Alpha Centauri has got to be one of the most affectionately cheapest and ridiculous monster designs in the entire history of the show (I can think of others, though) and it’s nice to see ‘it’ back on screen for a fortunately brief period of time here. What’s even more startling is it’s voiced, once again, by 92 year old Ysanne Churchman, who voiced the character in its two other appearances and who is probably more famous for playing Grace Archer in the long running British radio show The Archers (a character who died in a fire on that show in 1955).

So, yeah, a nice slice of nostalgia for fans of the Pertwee era and it certainly left me with a good vibe.

However, we also have the return of Missy/The Master as the only way Nardole can get the TARDIS back to The Doctor is to release Missy to help. Which reveals a possible other weakness of the episode as it stands at the moment, without the context of whatever’s going to go down with Missy in weeks to come. That is to say... we have absolutely no idea why the TARDIS malfunctioned in the first place. Was it just pulling itself out of danger like it occasionally has before (I don’t think it would leave The Doctor without coming back for him). It certainly looked like an invisible hand was pulling at the controls. Or is something more sinister going on. Was the TARDIS reprogrammed to do this on cue so that Missy would gain access? I guess we will, at some point, probably find out... or possibly not since the resolutions in most series finales of Doctor Who these days often leave a lot of badly forgotten loose ends and a lot to be desired. We shall see.

There’s also the matter of how the probable predecessors of the Ice Warriors set many years in our future on Mars, in the David Tennant episode The Waters Of Mars, can somehow be fully evolved and in hibernation for thousands of years in the Victorian era. I’m not too fussed though. Something for the fans to figure out, I guess.

However, as far as Empress Of Mars goes, for now, let me congratulate all involved, especially Mark Gatiss, in bringing us a cracking episode of Doctor Who just when we really needed one. God Save The Queen.
Posted by NUTS4R2 at 11:55