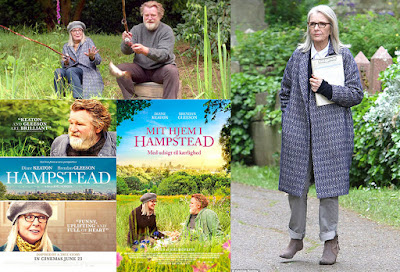 Shack To The Future

Hampstead is a film I came to quite by accident. By that I mean that I didn’t hear anything about this production until I caught a trailer for it in the cinema a couple of weeks before it was released. I’ve always liked Diane Keaton since her days pairing up with Woody Allen (I used to adore her singing Seems Like Old Times in Annie Hall) and the movie looked like it was something more interesting than a lot of the turbulent, explosive movies on offer at my local cinema at the moment.

The end credits mention that the film is ‘inspired’ by the real life ‘ Hampstead Hermit’ Harry Hallowes although, to be fair, I suspect there’s an awful lot of embellishment in this one which, you know, is usually the case with ‘true stories’ or biopics. In fact, the character’s name has been changed in this to Donald, as played by Brendan Gleeson, while Diane Keaton’s completely fictitious character is called Emily. So I don’t think it’s a far stretch to say that there’s not a heck of a lot of basis for this in the real life story which inspired it but... this is art so, you know, there doesn’t have to be.

This is probably going to be a fairly short review, however, because there’s not too much to be very critical about. It’s not being too ambitious as to where it’s reaching and it ends up as a kind of charming, romantic British comedy with, maybe, a little more edge than some others, at least in terms of the little truths which cut at the heart of the two main characters, Emily and Donald. I suspect there’s a lot that the actors here brought to the table in this one too because, technically, the script seems to have not much to say in terms of the history of the character’s lives. It’s all pretty much done in shorthand with a few scenes thrown in to establish details... with Donald coming off as the more mysterious of the two, although there are some hints about his past from which you can deduce all the necessary emotional baggage the character is carrying around with him.

For instance, we know Emily is a widow who has lost her husband about a year before this story starts and that she has found out he was having an affair with a younger woman. When she shouts at him and throws her shoe at his grave, complaining about all the debt and red tape paperwork he has left her with, you get a pretty good idea at the turmoil and drifting quality of her character.

But even though these two characters, Emily and Donald, have quick swipes at their personal histories, the two actors involved bring them totally to life and they become real people before your eyes. You get a real sense of their history just from the way these two veteran performers are absolutely nailing the attitudes and body language of the words they have made flesh.

The story itself is about a man called Donald who has been living in a shack in the forest which he built for himself seventeen years prior and who is being threatened with eviction. He lives the life of a reclusive tramp who catches and cooks his own meals, bathes in the river and generally lives a carefree life where he doesn’t want that much contact with people. However, Emily tries her best, almost by stealth, to help him and sets in motion a chain of events which sees Donald in court defending his right to stay put... instead of just getting angry at people about it

Keaton is an absolute powerhouse in this and I always wonder why I don’t see more of her in films these days. She plays a caring and compassionate woman caught up in a web of ‘rich Hampstead dwellers’ who she seems to have nothing in common with before she meets and ultimately falls in love with Donald. She is an absolute master of her craft and I noticed in this that, although the scripting is pretty good it’s, as I implied before, what’s not in the script where she really comes into her own. It’s almost as if you’re watching a silent movie and I’m convinced if this was playing without dialogue in a cinema, you’d still be able to make complete sense of the story even without any inter-titles because Keaton uses her face a lot here... twisting it into quizzical expressions and stealing deductive half glances at the characters she interacts with in such a way that no talking is required (although, obviously, she’s pretty good at that too).

Brendan Gleeson, mind you, is similarly a force to be reckoned with here in his portrayal of the gruff, bear of a man that is Donald. I’m not that familiar with his work (although a quick scan of his career on the IMDB shows that I have actually seen a few other movies with him in them) but I know I want to see more of what this guy can do because he’s brilliant here... matching Keaton’s acting style perfectly and bringing his talent to the table so that, when they’re together, the two elevate each other’s performance as they sparkle against each other (I recently picked up a very cheap Blu Ray of Calvary with Gleeson in it so I may give that one a go fairly soon).

Keaton and Gleeson are also aided by a pretty sound cast too... not least of which is Mike Leigh regular Lesley Manville as, almost, a kind of villainess of the piece, in some ways... but she manages to bring a certain lack of black and white to the character which you maybe wouldn’t expect, given her story function in the picture. And we also have some pretty sound cameos from people like Simon Callow as the judge, James Norton as Emily’s son and a very intense Phil Davis as a key witness in the trial at the end. Actually, at the time of writing this review, the IMDB seems to be totally unaware of Phil Davis’ presence in the movie but, you know, trust me... it’s him.

The film is not particularly flashy or overt in its mise en scène, to be fair... it does however capture some of the nicer looking parts of Hampstead and the surrounding areas very crisply so the film is certainly easy on the eye and, almost a rarity these days, the editing doesn’t get in the way of the flow of the movie. With a mild and pleasantly impressionistic score by Stephen Warbeck, the film weaves its spell and gives you what I would call, a nice agreable night out at the cinema. Something which is not to be sneezed at when giant transforming robots are vying for your attention and want to ruin your eardrums with their over-enthusiastic sound design.

All in all, Hampstead is a nice little movie and something I would wholeheartedly recommend. It does get a bit syrupy, for sure... but there’s plenty of grit and challenging viewpoints thrown into the mix too so... you know... maybe give this one some of your time.
Posted by NUTS4R2 at 19:05