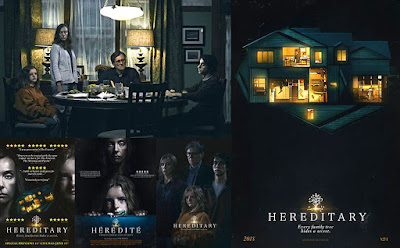 You know, this has been trailering at my local cinema for months now and my interest in seeing this was growing every time I saw the promo... which in itself is cut together in a slightly misleading way. Well, nothing wrong with that and I will say that I don’t intend to be posting too much in the way of spoilers about this other than what you can glean or speculate on from that initial trailer.

Hereditary is a film which I suspect is going to split most audiences passionately down the middle... divided between those who write the movie off as completely ridiculous due to the last five or ten minutes of the movie and those who can, despite the absurdity of that sequence, recognise that the build up to this point in the movie is actually really well put together. And therein lays the problem with this particular beast but... before I highlight the negative stuff, let me tell you about the huge amount of positive things this film has to offer.

Now I’m sure most of you have seen the trailer dealing with a family... mother Annie (Toni Collette), father Steve (Gabriel Byrne), son Peter (Alex Wolff) and his small and somewhat sinister, little sister Charlie... played by Milly Shapiro who makes those disturbing clicking sounds you’ve probably seen in the film’s promotions. After Annie’s mother dies, she continues working as an artist building her miniature scenes based on real chapters of her life and tries to continue on with her family. Indeed, the first long shot of the movie includes a slow track into a dolls house she is working on that becomes the set of one of the rooms in the house. And then ‘things happen’ and that’s as much as I’m going to try to tell you about the plot here because it does get a little predictable in places and I don’t want to be responsible for leading you to the right conclusions about the movie.

Horror enthusiasts might have already figured out that the distinctive clicking sound that Charlie makes is an aid to the filmmaker to have something strong and identifiable so that it can become linked to something in your mind and create tension when it sounds the alarm bells. Well, yeah, if this is what you were thinking you’d be absolutely right. The sound is not functionally unlike the sound of the hostile plants approaching in the 1963 version of The Day Of The Triffids or the sound that the giant ants make when they are around in the 1954 movie THEM! It’s perhaps a bit of a cliché but it works well enough here and honestly I didn’t mind it.

The main reason I didn’t mind it is because this film isn’t one of those immensely fun but sometimes a bit ‘samey’ modern horror films which rely too often on cheap jump scares to rattle your nerves. There are a few times when the film gets kinda scary in places but it rarely relies on the sudden surprise that seems to be the currency of contemporary genre film making. Instead it utilises a kind of creeping fear which plays on the mind and sends the odd prickle up the back of the neck. Such as three or four intense scenes where the director plays on the universal fear brought on by thinking you can see someone in your bedroom at night in the darkness, only to find out that various furniture or possessions bundled up together are just giving that illusion. There’s a lovely denouement to one of these scenes which I think a lot of audiences will go for. Unfortunately, this film is so good at this sort of stuff that, when the final act of the picture finally comes, things seem a little foolish in comparison to such a well prepared lead in.

However, the cast and crew do a lot of good work and there are some lovely shot compositions here as well as some wonderful foreshadowing of certain themes.

For instance... and if you’ve seen the trailer you will probably remember this moment... after a pigeon flies into the window of her school, Charlie is later to be found snipping off the dead bird’s head with a pair of scissors as a keepsake. This not only heightens the strangeness of the character (which actually might be a piece of deliberate misdirection by the director) but also echoes a lot of... hmmm... shall we call it head play? There’s a certain morbid obsession with decapitations in this movie and so the scene where Charlie performs her makeshift surgery on the dead bird actually does have a point to it and there’s even a certain amount of story logic to it too, when one looks closely enough. Like I said... this film has foreshadowing coming out of its ears.

Perhaps my favourite piece of foreshadowing in the whole movie, however, was during a family car ride home. We have a long shot of the car speeding down the road going left of screen and the car is kept squarely in the middle of the camera until it goes past a telephone post and then the shot stops dead with the telephone post splitting the screen vertically in the centre of the shot while the car quickly speeds off of the left of the screen. So we are left with just the post and nothing happening in the static view of the road which it holds for a good few seconds. It might have been punctuated by a musical beat here, I don’t quite remember.  I didn’t even realise what this was about but I acknowledged it as a really nice cinematic moment and it wasn’t until much later in the film, a fair way after another memorable sequence involving what I assume is the same telephone pole, that I realised what a brilliant piece of highlighting this was. Although I can’t tell you why at this point because... you know... spoiler free.

Talking about the music... Colin Stetson’s score is quite restrained and brooding and just what you need for a film which doesn’t employ shock tactics to slowly build its tale. There was one scene where the music seems to be ‘mickey mousing’ what’s on screen but, interestingly enough, it’s not actually mickey mousing the action itself... more adding rhythm to a piece of the sound design and giving it a more insidious hook into the ear. It’s a shame the movie didn’t do more of this stuff on occasion because the way it’s done here is quite effective and I don’t remember seeing/hearing it done quite in this kind of way before. It suspect it will be a fairly interesting listen away from the movie and... yeah, I just ordered a CD of this thing from Amazon before typing the rest of that sentence. Luckily it has an appropriate physical release.

So yeah all of this is great but... like I said.. the film has a few problems.

The least problem this film has is that it’s a mite predictable. I’ve seen some posters with ‘critic’s copy’ on them describing it as this generation’s The Exorcist. Well... nope, it’s not and if there’s a big film from the past I might be more tempted to compare it to, that would possibly be Rosemary’s Baby. Indeed, there’s a moment in the film where you first meet a character and right away I thought to myself that she might as well have introduced herself to the audience and another character with the words... “Hello, I’m your friendly support lady and I’ll be your Ruth Gordon for the evening.” I think most people will, like me, work out what this lady's overall function is in the main narrative as soon as she comes into the story but, again, I didn’t mind it so much because the artistry, not to mention the quality of the central performances in the film (especially by Collette and Shapiro), is absolutely first rate.

The biggest stumbling block of the movie for me is... well, let me tell you what happened in the screening I saw. About 5 or 10 minutes from the end of the film the audience started chuckling and, as things escalated, laughing the film off the screen, almost. I can’t say I entirely blame them either. There’s a point just after one of the lead characters starts getting chased around the house that the film switches tonally very quickly from creeping terror to the downright silly and unsubtle. The imagery in this last section wouldn’t have looked out of place in old movies like Tom Thumb or Jack The Giant Killer and although it was all valid in terms of finishing off the story in a logical way it was really a case of too much too quickly. After the long and slow build up it switched totally into the “well, that escalated quickly” stage and lost all credibility, I felt. Obviously I didn’t feel that quite as strongly as the rest of the audience, however, who were openly giggling by the end.

One last thing though. There’s a nice touch where the final shot kind has the camera tracking away from a scene in the same way that the first scene was tracked in from a shot of a dolls house. Now, one of the nice things this director does... and it’s not the first time I’ve seen this done but I haven’t seen it done in a single movie quite as frequently as it happens here... is that he transitions from day to night and back again in the outside world just like he’s flicking a light switch on or off. Everything just switches to daylight or night time, eschewing any sunrise or sunset. Now, given the whole ‘doll house’ framing device, one wonders if this is part of one final comment as to the reality of the world in which the film’s central narrative takes place. Are all these characters just figures being moved around in a miniature form? It’s food for thought but I’m not going to get too bogged down in that one. Sometimes when you think about the mechanics of a story too much the whole thing just falls apart.

So there you have it. I actually quite enjoyed Hereditary for what it was but ultimately it felt like it really dropped the ball in the final act. I do, however, think it’s worth a look... not for the horror fans exclusively but for a general audience because some of the film making on display here and, especially, the craft of slowly weaving a tale is pretty well done. Whether or not you think the ending lacks a certain amount of credibility is another matter but don’t let this stop you from enjoying the rest of the movie. It’s certainly not without its charm.
Posted by NUTS4R2 at 11:16