Ladies Of The Night 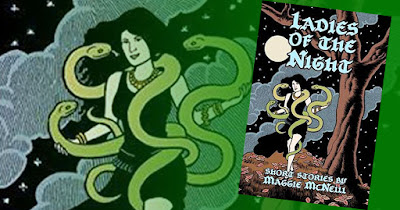 Okay so this is a book I had as a recommendation from Twitter. Not that anyone actually recommended it to me personally but I saw someone or other talking about how good it is (they were right about that) and I looked at it and thought that the cover was really cool. Added to that the fact that the writer, Maggie McNeill is/was a sex worker and that all the stories, more or less, feature characters from a world where sex is sold or bartered as a service was just the icing on the cake. I’ve always thought that working girls were criminally underrated and persecuted in terms of the attitude towards service they provide to the general public at large so, whenever one sticks their head up from behind the parapet and does something additional with their talents, I’m always interested.

Now, I was a little wary about this volume called Ladies Of The Night because, for the last few years, I’ve not been getting on with the short story format as much as I used to as a kid. I mean, don’t get me wrong, the short stories of, say, Philip K. Dick are almost always absolutely amazing but some of the ghost story anthologies I’ve read lately (and if you’re a regular reader you’ll know my December habits by now) have been pretty underwhelming.... especially when they purport to have some kind of Twilight Zone style twist but rarely end up delivering anything either a) surprising or, b) remotely thought provoking. Then again, I really wanted to own a copy of a book with that printed cover so... yeah, I gave it a go.

As it happens, though, I was pleasantly surprised by both the quality and content of McNeill’s short fiction. She can spin a yarn or, in most cases here, a nicely realised sketch of a concept and, although the majority of the stories hosted here which are, for the most part, taken from the writer’s blog The Honest Courtesan (which you can go to by clicking here) are only a few pages in length, she manages to invoke and weave together some pretty cool ideas and atmospheres in this tome.

I say hosted because a really nice touch with this collection is that McNeill’s written a short introductory passage to each story which gives a little context as to why it came to be written or in what kind of time period it is set. And there are some real corkers in here too with different writing strengths coming through in various stories. For example, the extra long opening tale Pandora is all about the atmosphere of dreams and the ways that the curious world of sleep can dominate and bleed into the everyday. Whereas another tale may be more about the way in which the attitudes and perceptions of the professional choice of the central protagonist are highlighted with, often, a much more idealistic conclusion in the understanding of some of the heroine’s decisions portrayed than comes about in a real life scenario.

Indeed, almost all of the tales here could also be labelled as either science fiction, fantasy or supernatural in content. There’s even a brilliant, recurring character in three of the tales called Aella, who is an amazonian heroine in the style of the kinds of characters you’d find in Robert E. Howard’s Hyborian tales such as the likes of Conan of Cimmeria and Red Sonja.

In the first of these three Aella shorts, A Decent Boldness, Aella finds herself far from home and her actions to rescue a girl find her offered a hefty wage to be security in a brothel. She learns the ropes and it makes the point, quite succinctly, that a more than decent wage can be made from the encouragement of the sins of the punter.

The second tale, A Haughty Spirit, is set four years later as she and her friend/lover are on a long journey back to her tribe of Amazons and I loved the tactics that she uses to rescue her friend from the chieftain of a hostile tribe.

The third of the Aella tales. Glorious Gifts, offers a more practical approach to things perceived by others as affairs of the heart. This places our heroine in a possible dilemma that is, in some ways, a metaphor for how our stupid governments treat the idea of sex work (if I read it right).

These are all great as, indeed, the majority of the stories in this volume are and I found it refreshing that, asides from the theme of sex as an item of transaction, the events and situations are from a wide variety of fictional times and places. In here you will meet sex robots, vampire hunters (and, of course, vampires), detectives, superheroes, aliens, ghosts, mirror portals, Gods, faeries and even, in one memorable instance, a tale which examines an underlying problem of a certain, unnamed, time travelling Gallifreyan in a very interesting manner. So, yeah, as a longtime watcher of Doctor Who, I was very pleased with this one.

The other thing about this collection is that... for the most part... the little twists at the end of each tale are actually something which you might well not see coming. I was surprised, in a good way, a few times and, as my regular readers will know, this is a talent that I value highly. I’m very rarely surprised but this collection has some nice little ‘stings in the tales’, so to speak. They more often than not come in the very last paragraph or line of the story too... which is maybe even harder to do. My absolute favourite one in this collection is called The Specialist and it is a tale told by a working girl who has developed a service where she caters for a very specific kind of client. I’m not going to spoil that for you here though but, you know, worth a read. Like a number of the stories in the book, this one starts off with a character looking backwards at certain events until we catch up to the present, usually right at the end of the story.

And that’s all that I have to say about this one, I think. Maggie McNeill’s Ladies Of The Night is a truly interesting, entertaining and thought provoking collection of short stories. Well written and none of them outstay their welcome. Really enjoyed this one and am very much looking forward to purchasing and reading her second collection of short stories, Forms Of Things Unknown, when I am able to. In the meantime, if you are a fan of short fiction, this one might be right up your street.
Posted by NUTS4R2 at 19:16