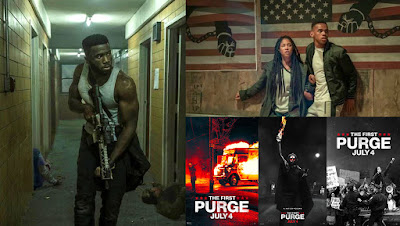 Yeah, well, I don’t know about this one. The First Purge seems to me like a huge mis-step for the franchise.

The way I stand with the previous films in the series is thusly... The Purge (reviewed here) wasn’t brilliant but it had some great actors and a nice, pure dystopian sci-fi central concept which worked at odds with the kind of barbaric spectacle it was trying to be for the audience. Both The Purge: Anarchy (reviewed here) and The Purge: Election Year (reviewed here) freed the action from the ‘family under siege’ concept of the original and turned it into more of a full blooded action franchise with a more interesting attempt at ‘world building’, a nice moral heart and a further exploration of the original concept which showed how evil the people in power control and slaughter the population to suit their own needs. I quite liked these two sequels.

At the end of the third one there probably wasn’t much more that could be said and things felt like they’d reached a conclusion/turning point that would make any further iterations of this concept a little redundant, to be honest. So the people at Blumhouse, a studio who I think have done some good work over the last five or more years, decided to do what they did to their Insidious franchise in order to keep this popular series from dying... they’ve taken it backwards and made this a prequel to the original film, taking us back to the very first night of ‘The Purge’ experiment which, we are told, took place on Staten Island. It still doesn’t take a lot of time to talk in detail about how or why this ‘scientific experiment’ emerged in the first place but it’s such a simple concept that it doesn’t really need to. Things are as they were shown to be in the previous movies: America is overpopulated with too many mouths to feed... let’s put a ‘releasing and carthartic spin’ on this whole purge thing and let half the population kill each other to save on pensions etc. And there you have it... nothing much has changed.

Unfortunately, nothing new is revealed or tweaked in this one and, although it’s got some solid action set pieces and some remarkably good acting from the main leads, this film really has nothing further to add to the recipe except... I dunno... this feels a little like a blaxploitation movie. Which I’m fine with in some ways. I love some of those classics like Coffy, Cleopatra Jones and the Shaft series but... this one feels a little more of a powder keg to inciting racism, to be honest.

For example, both the thugs doing the purging and all the heroes trying to keep themselves alive or going out on the streets to protect their people are almost exclusively black, for some reason. I think, with the exception of the very first person who gets killed, there wasn’t a white face in the crowd down at ‘street level’ where the action is. Which seemed kind of bizarre, to be honest. Furthermore, the people in power who are manipulating things and who are the real villains, including the mercenaries and military goons they hire to ensure The First Purge goes exactly how the government want it to... are almost exclusively white. Now I’ve got no problem with the white guys being the villains... that’s possibly much more accurate to the way things are in real life at the moment but... I do have a problem with the ‘poor, huddled masses’ being portrayed as almost exclusively dark skinned because it seems like it’s pushing an ugly agenda.

In the last three movies it seemed to me that a good, underlying message was that people of all different colours, sexualities and religious beliefs were banding together and working with each other to stop  the evils of The Purge. This movie makes it seem like anybody who is poor is black and they need to target the ‘white oppressors’ and that’s the end of it... which doesn’t sit that well, I think. Especially since the majority of the white soldiers are costumed up as either nazis or klansmen (or some kind of crossbreed of the two, in some cases).


That being said, the heroes here are pretty cool with Nya (played wonderfully by Lex Scott Davis) looking out for her little brother (played by Joivan Wade, who some readers might remember best as Rigsy from two of the more recent stories in Doctor Who)... who is out on purge night for his own agenda. And “Who is the man who would risk his neck for his brother man?”, to quote a popular song about another great hero? Well he’s Dmitri, played by Y'lan Noel, who really knocks it out the park and makes a credible young anti-hero who you can really get behind. This actor needs to be playing a lot more roles in this kind of vein, if you ask me. His personality really lights up the screen here.  Alas, the other somewhat disappointing thing about the movie is that Dmitri is also a kingpin crime boss for the city and is shown to be a drug, girls and arms dealer who will happily rub out the opposition (if they make the first move). So, yeah, although I loved this character and would want to see more of him, the glorification of what his character represents is another thing which really didn’t sit well with me, in all honesty. It’s problematic at best, I think.

The other thing which is an issue with this film and with the series in general is something I think I must have mentioned with this franchise before but in this entry in the series it seems to be even more overt... and that’s the amount of deus ex machina rescues there are every time one of the main characters is about to be taken out. It seems to be happening as the tension release to a heck of a lot of the scenes in this movie and I really hoped the writing could have been a little better than this by now. They even do the classic of having a bad guy inadvertently saving the good guys by killing off some of the other bad guys and... yeah... the suspense kind of drops off because every time somebody looks like they’re just about to get killed, you kind of know somebody else is going to suddenly just pop out of the woodwork to save the day.

I’ve seen some people saying the storyline has some reveals and revelations about the dark heart of the politics behind The Purge but I really don’t think this has anything new to say. It’s like the people saying that somehow managed to completely miss the point of the last two movies, it seems to me. The First Purge is an okay movie with some cool acting and characterisations, some nice action and the odd bit of tension but it’s definitely the least effective of The Purge franchise and doesn’t give me much hope for the upcoming TV series which will be hitting screens in the US sometime very soon. I’m not really sure there’s anywhere else left to run with this specific, conceptual ball, from what I can see. I can’t imagine there will be another movie in the series until the inevitable remakes in 10 or 20 years time and, looking at the way this one has skewed. I don’t think that’s necessarily a bad thing.
Posted by NUTS4R2 at 16:17