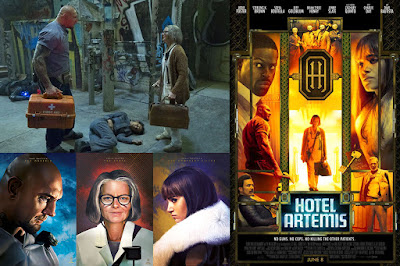 Tight Rules For The Job

Wow. What a great movie.

I'm somewhat dismayed to find the one and two star reviews in abundance on the IMDB for this one. To be fair, these mostly seem to be from bizarre individuals who thought they were going to see some kind of mad John Wick style affair, for some reason but, in all honesty that’s not the kind of impression I took away with me when I first saw the trailer for this thing a couple of weeks ago.

Another thing I definitely didn’t realise from the trailer... but which hits you in some very obvious ways right from the outset of the movie, is that Hotel Artemis is very much a science fiction film in that it’s set in the near future in Los Angeles and, I have to admit, I did get a very slight Blade Runner vibe coming off it, although not quite so outlandish, in some ways, in its predictions.

What it really is, however, is something much older and traditional in its place in the history of cinema, I feel. This is like one of those old 1950s/60s criminal’s ‘hospital safe house’ kinds of movies which would show up in the guise of a film noir or, sometimes, a 1950s western siege kind of affair. In fact, I can very easily envisage the young, late 1970s version of John Carpenter making a very similar style of film to this if he’d had this script.

The film starts off with a bank job which goes wrong for one of the main, more heroic protagonists... Waikiki played by Stirling Brown... when his crew screw things up and his brother gets shot up quite badly. So he takes him to the special floor of the Hotel Artemis. That’s four guest rooms and a mini surgery embodying a ‘patch you up quick’ hospital run by The Nurse, played by Jodie Foster and her assistant Everest, played by David Bautista. It’s an establishment which has very hard, unbreakable rules such as not killing the other patients/guests, no smoking, absolutely no cops and, unless you are a paid up member to the place, you won’t be getting into her establishment and past her little arrival room. I say her establishment... she just runs the operation but it’s actually owned by the most feared crime kingpin in Los Angeles, Niagara, played by Jeff Goldblum. Oh, by the way, only the patient’s code names are used in the Hotel Artemis, named after the room they have been assigned to but, you do find out a few of their names as the movie progresses.

And what a movie it is... Nurse and Everest also have another couple of ‘guests’ staying there on the evening in question. Acapulco, played by Charlie Day and the absolutely drop dead gorgeous, professional assassin Nice, played by Sofia Boutella. This film is about the night where all the rules pretty much get broken and everything goes wrong for Nurse and Everest. Waikiki is in possession of something his brother stole when the job went south which belongs to Goldblum’s character and he will be dead if it’s caught on him (Niagara doesn’t take too kindly to robbery). Also, it becomes pretty clear that one of the other characters has another agenda attached to their stay at the Hotel Artemis. Plus, to make things worse, Goldblum’s son, played by Zachary Quinto, is heading in their direction to smooth the way because his father is injured and needing The Nurse’s services. And did I mention this all takes place when a huge riot over access to water is taking place in the streets of LA?

So yeah, all the early cinematic storytelling clichés are here in abundance but it’s all given a nice, fresh coat of paint by writer/director Drew Pearce on his first feature length movie and it’s a real treat for fans of genre cinema, that’s for sure. And fans of acting too...

Jodie Foster is beyond excellent, giving the confident but anxiety ridden (if she’s ever faced with the possibility of leaving the hotel) character a nice kind of shuffling gait to her run and helping flesh out the flashbacks to her dead son... which will of course, although she doesn’t realise it yet, tie into another character in the hotel. Goldblum, as usual, is great but David Bautista, who is someone I’ve had my eye on for a while, totally knocks it out the park again with a character which is a slight variant on the kind of person he played in Blade Runner 2049. I have a lot of time for this actor and putting him as a kind of double act with veteran actress Jodie Foster is an absolute stroke of genius. And then there’s Sofia Boutella, who impresses me more and more with her combination of smouldering looks coupled with the ability to make hand to hand combat look amazing and lethal without ever seeming empty headed in her approach to the characters she plays. I’m really surprised that Marvel haven’t tapped her yet to lend credibility as one of their super heroines in the current crop of Marvel Cinematic Universe movies, to be honest.

And it’s a really great juggling act of modern movie making. Invoking the feel of those old westerns and hard boiled classics, cross pollinating it with a science fiction setting and then throwing in some well choreographed action scenes into the mix too. I was truly impressed by this movie and would say it’s one of the more interesting of this year’s Hollywood style movies, in all honesty. In fact, I’m toying with the idea of seeing it again in a week or two when it gets a general release over here in the UK (I saw it at a Cineworld preview screening) and, certainly, am looking forward to a Blu Ray purchase when the time comes. It’s also got a really nice score by Cliff Martinez which utilises, if my ears were hearing right, some nice cimbalom melodies, often synonymous with the kind of dark, cold world of the 1960s spy thrillers. Alas, as far as I can tell, this score is only available commercially as a download rather than a proper CD release so, once again the movie music labels have let me down and I don’t get to hear what it’s like as a stand alone listen. Which is a great shame. I wish labels like Lakeshore, who publish the download version of the score, would stop doing this.

At the end of the day, the wonderful compositions and the beautiful, claustrophobic atmosphere evoked in Hotel Artemis make it one of the better cinema experiences I’ve had in a while and I’ve got nothing but good things to say about it. A hard recommendation from me with this one and, if you do go, stick around for a little scene just after the end credits start rolling... there’s possible wriggle room for a sequel if this movie had set the box office alight the way it should have. If you are a lover of cinema, especially sci-fi noir, then don’t let this one pass you by.
Posted by NUTS4R2 at 20:27