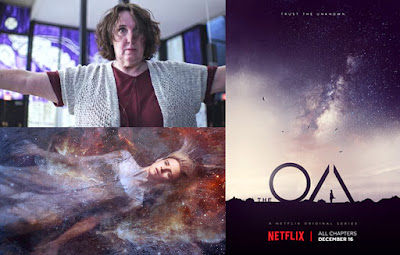 I’ve talked about actress Brit Marling before on this blog, both in her co-creative role with Zal Batmanglij and in her work with various other people, in some amazing films such as Sound Of My Voice (reviewed here), The East (reviewed here), Another Earth (reviewed here) and I Origins (reviewed here). I’ve quickly become hooked on the kind of work she and the performers/people behind the cameras that she works with does in movies and so, when I heard that she and Zal had co-created a TV series together, I got kind of excited and desperately wanted to see it. Alas, regular readers will know I’m not fan of streaming channel specific media and the kind of exclusivity that comes with it to subscribers so it looked like I wasn’t going to get a chance to see this one. Luckily, a friend gave me a way of seeing this and I was, once again, blown away by the kind of work this actress gets involved with.

Now, this is going to be a very tricky series to write about... partially because Batmanglij and Marling are about promoting the world of ideas and cultivating it in the collective mind of their audience, rather than presenting a standard kind of narrative which quickly crosses t’s, dots i’s and generally explains all there is to be found in a way that’s specific to a creator. Rather, they take some ideas, run with them and have an uncanny knack of getting you to ask questions about what you are being presented with and then leaving things for you to ponder on and draw your own conclusions from. That’s often the most powerful kind of evocative cinematic experience a writer/director can gift you with and, I have to say, The OA is one of the few television series’ I’ve seen which manages to do just that.

The other reason it’s a tricky thing to write about is because I really don’t want to give you any spoilers here. In fact, I’m not even going to tell you what The OA actually means or stands for. You have to find that out for yourself as you go on this, quite compelling journey of a TV show. So, yeah, I’m sorry if this is a short review but I don’t want to say too much about it. What I will do, though, is give you the basic plot set up so you can make your mind up as to whether you want to see this. So, I'm flagging a very slight and small spoiler from the first episode here although, frankly, I think knowing the start of the basic premise is just going to make you want to watch this one even more. So, if you want to know nothing about the plot at all... just skip this next paragraph.

The story starts at a point in the present when a dishevelled Prairie Johnson (played by Brit Marling) is seen running through traffic on a crowded bridge and jumping into the waters below. She is fished out and she has somehow survived this. Her parents (played by Scott Wilson and Alice Krige) are informed that she is at a hospital, declaring her real name is The OA. Prairie has been missing for around eight years and her parents are anxious to see her. Here’s the kicker though. When they get to the hospital to visit her, Prairie is asking the doctors and nurses surrounding her who these two people are. It’s okay though, explains her father to those assembled, it’s just that she’s never actually seen us before. It turns out, you see, that before Prairie went missing... she was totally blind. Not any more though.

And if that’s not an intriguing start to a story then, I don’t know what is.

Don’t want to say too much more about the narrative other than it tells a lot of things in flashback and then crosscuts to what is happening to Prairie in the present, as she struggles to not tell the FBI too much about what’s happened to her in the last eight years. Instead, she tells what’s happened slowly, night by night as the series progresses, to a bunch of five misfits who are finding a place to belong with her, in some ways. They are played by Patrick Gibson, Phyllis Smith, Brendan Meyer, Brandon Perea and Ian Alexander and, true, some of these characters are a little like walking clichés but I think that’s kind of deliberate because it helps provide something familiar to the audience to help sweeten the pill of some of the truly wild turnings this show goes down as Prairie tells her story. And clichéd or not, they’re very much 3D characters, for the most part and, as you’d expect from this creative team... they’ve picked some really great actors for these parts. Oh... and Jason Isaacs has an important role to play here too but... yeah, can’t really tell you what if I want to remain relatively spoiler free here.

The series, like the films I mentioned above, is not a thrill a minute ride which will have you speeding along with it. Instead it does things at its own pace and takes its time to pull you in while slowly putting little layers of background information in place about the various characters. And as it does so, it pushes you into the slow moving but inexorable creative current that runs through the centre of the story and doesn’t let you go until you’re ejected. Also, it doesn’t, like nearly all formula television, feel bound to a consistent running time from episode to episode. Instead, like the chapters in a book (and I think it might have been Batmanglij who made this point in an interview), each episode finds its own perfect running time for the information it wants to convey. So some episodes may run for over an hour whereas, one particular episode, only lasts little over a half an hour. One episode might have the opening credits near the start... another may not start on them until almost at the end of the show. It feels weird at times but it does the job so I really couldn’t complain about this.

The story does build to a kind of natural conclusion but one which leaves many things unanswered... as you will be expecting by the time you get there... although it also has a brilliant kind of double stance on the way things play out. The last episode does kinda pull the rug out from under the audience (and some of the other characters too) while also giving you something which slips that rug right back under your feet again, depending on how your brain decodes the art in front of you. Something which I suspect will get redefined a little anyway during the second series, which I believe was released last week (don’t know if I’ll get to see it though).

Not much more to say on The OA for now, other than it has some nice musical moments and some truly spectacular special effects sequences at times. One of the best shows on TV of recent years, for sure and that’s something I’d totally expect when I see Britt Marling’s name connected to something. Certainly a hard recommend from me if you are, unlike myself, someone who watches a lot of TV rather than film. And definitely something I’d say hunt out if you’re a film fan too, while I think of it. Don’t miss out on this one.
Posted by NUTS4R2 at 19:16