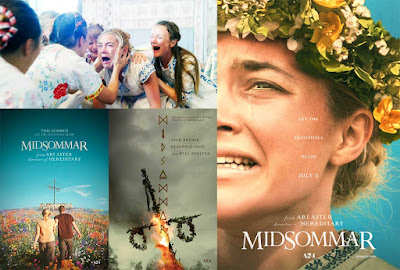 Regular readers of this site may remember that I was kinda torn in my opinion of Ari Aster’s horror movie Hereditary last year (reviewed by me here). There was some very good film making on display there but the tonal shift at the end of the movie plunging straight into supernatural shenanigans with no real slow burn build up to them caused a lot of the rest of the audience I saw it with to laugh while I found myself tutting at the way the spell of the rest of the film was sacrificed to an almost atmospherically non-sequitur of an ending.

Well, I’m here to tell you that Midsommar, Aster’s follow up feature which is pretty much an homage in spirit to films like The Blood On Satan’s Claw (reviewed here) and The Wicker Man is certainly much more on the ball in terms of it being tonally consistent. It also showcases, once more, some very strong cinematic manipulation which certainly makes it a joy to watch on a purely technical level. It also, alas, suffers from one of the main weaknesses that Hereditary had, in terms of its almost deliberate predictability and, ultimately, feels more like a piece of fluff in terms of actual content... although it’s dressed up beautifully, it has to be said.

It’s also, funnily enough, not a horror movie as I was expecting it to be, which was a little disappointing. If anything, I’d say its nearest cousin, asides from those films I mentioned above (especially The Wicker Man which also isn’t a horror movie), would be the American slasher movies predominant in the 1970s and 80s. I can’t, in all conscience, describe this one as a thriller either since it’s mostly obvious what’s going to happen and it’s so slow moving (and that in itself isn’t a bad quality to have) that it feels more like a somewhat flat drama with the odd piece of surrealism thrown in.

Okay, so positive things about the movie... well, the acting is great, especially from the likes of Florence Pugh and Jack Reynor (who has a bizarrely striking screen presence here).

And then there’s the camera work and editing which really highlight a great auteur at work (even if I don’t think we’ve seen this guy’s masterpiece yet). For example, the opening sequence is truly amazing. It starts off with a series of static shots of snowy landscapes at twilight with a haunting soundtrack, one after the other. Once the director has lulled you into being comfortable with the rhythm of the shots, the shrill ring of a phone penetrates through the soundtrack and keeps going in time with various cuts which, at this point in the sequence, zoom in (via a sequence of static shots still) on a specific dwelling, acting as an establishing sequence which carries on into a scene which starts with that phone call. This is great stuff and there’s a lot of this kind of the editing of the shots mixed with sound as the film goes on, although there’s also a great deal of slow, moving camera work too.

This general mise-en-scene coupled with some truly beautifully designed shots where the director will section people off into different geometric shapes on screen deliver a film which, whatever its sins, never gets boring. Not only this but there’s some truly startling pieces of surrealistic imagery where one of the main characters seems to almost randomly fuse with the very landscape she is a part of.

Also, while the level of goriness is fairly high, there’s also some quite poetic, if fairly unpleasant moments in the film which are equally surreal (a vivisected person with daisies for eyes suspended and breathing still, through lungs which have been raised out of the back of a rib cage, comes to mind). Alas, far from being the supernatural stuff of horror movies, it’s all explained away within the text of the movies as the somewhat psychedelic properties of the ‘potions’ given to various people or, as the violence mentioned above, the work of a person or group of people. Which is why it’s closer to a slasher than a horror movie, in some respects.

The big problem, though, as I touched on above, is that Midsommar is nothing if not predictable. And it really doesn’t have to be. At some point you will even figure out just who of our main protagonists will be the last person standing, even if it does somewhat fly in the face of the convention of such tales in cinematic history. And it doesn’t help that there’s an awful lot of telegraphing going on in the film. The director likes to dwell on particularly prophetic drawings and paintings throughout the movie and it really is, as you’ll quickly realise, something of a guidebook to the way the story is going to unfold.

However, Bobby Krlic’s (aka The Haxan Cloak, in the few days since writing the first draft of this review) almost hypnotic score is a match for the sometimes off kilter imagery and I’m hoping this will get an easily importable CD release soon.* Its somewhat micropolyphonic texturing is sometimes subtle and sometimes booming and is a big help in certain places in the movie to ramp up the intensity of the imagery being explored. This is one I’d listen to away from the film, for sure.

Other than that, though... again, I’m somewhat torn. Tonally the director has this film licked and Midsommar works so much better as a ‘whole piece’ than his previous movie did but, alas, he still hasn’t worked out how to surprise his audience in terms of the story line and the simple, clean style of the somewhat effective imagery doesn’t add much in terms of substance to the content, it has to be said. Not one I’d recommend to people expecting to see a horror movie but certainly you can learn a lot about the way you can manipulate audience emotion through the editing and sound on this one... so students of moving image may well be advised to check this one out. Personally I don’t ever need to watch this movie again in my lifetime but... I’m sure some people will love it.

*Milan records have recently contacted me on Twitter to confim that they are releasing this on CD at some point in the future... gone are the days when you could buy the CD months before the movie came out, I guess
Posted by NUTS4R2 at 16:00