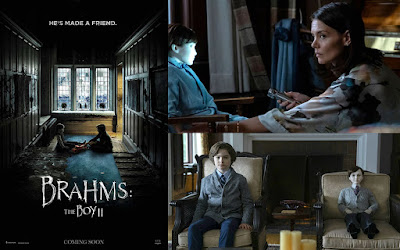 Warning: Okay, this one has spoilers.

When I was watching pre-movie trailers at the cinema a few weeks ago, one came on and, after a little while of my brain not really believing what it was seeing, I nearly got out of my seat and shouted in exasperation... but in the end just muttered loudly to myself... about somebody actually making a sequel to one of the absolutely worst horror movies of the last few years, The Boy (reviewed here). In fact, that first one wasn’t even technically a horror movie because the promising set up of a haunted doll that wants you to obey all its rules suffered a terrible plot twist where it turned out to be a serial killer looney living in the secret crawlspace of the house and moving the doll around when nobody was looking. It was a huge disappointment and made for a terrible cinema experience.

So I was hugely curious as to a) how anybody could make an effective sequel to what was essentially a one trick pony when it comes to the ‘big twist’ but also b) why in heck would anybody want to make a sequel to it. Since I own a Cineworld card it would cost me nothing extra to find out and I was kinda gleefully expecting the worst. Especially since the one element which made the first movie worth seeing, a new score by Bear McCreary, was absent in this one. I’ll say a word about the score to this one a little later.

So Brahms - The Boy II has no characters left over from the first film other than the titular doll itself and, instead, deals with a family who move to a smaller house on the same grounds as the mansion in England where the events of the first film took place, after the mother (played by Katie Holmes) and son (played by Christopher Convery) have been traumatised and nearly killed by a violent burglary attempt in their own home. The boy is left effectively mute by this experience but, soon after moving there, he finds the buried Brahms doll and it begins to dominate his actions and take over his mind.

That’s the basic set-up and, it has to be said that, although the jump scares and sinister atmosphere from the first three quarters of the first film are largely absent in this one, I’d have to say that this one is marginally better than the first. Not to say that this is an especially good film... it’s not... but it is better than the first and one of the things this one does get right is... like the recent Star Wars movie... to redact or rewrite the denouement of the previous film and have it so that the reason the guy was running around in the crawlspace killing people was because Brahms was making him. And, for sure, in this movie there’s no getting around that the doll in question is a lot more active than in the original. He regularly moves his eyes and head and, when you’re not looking, runs about the place causing mischief. This, of course, puts this movie right back into the genre of horror which the first film managed to throw out with it’s awful ‘reveal’.

Of course, once that cat is firmly out of the bag, the whole film becomes a lot more predictable too, especially in terms of one of the other characters and their dog. Not to mention a heck of a lot more ridiculous by the end when we find that Brahms can levitate people too and do all kinds of things he wasn’t doing in the first one. We also see what’s ‘behind the mask’, so to speak and the little zombiefied homunculus living inside the doll is certainly a lot more interesting, if ultimately a little bit more schlocky, than the anything found in the original movie. Alas, although the film is by the same director, this one is just not scary in the way it does things and the epilogue at the end of the movie, where we are given a glimpse into where a possible sequel might go... well lets just say that a sequel to this movie is the last thing we may want.

There are some nice things about it too... the shot design makes use of various spaces partitioned off into clearly defined rectangular frames and there’s a nice moment where the foreground arch in the interior of a house, from where the camera is shooting the movie with the action taking place in the next room, is mirrored by a smaller arch, in terms of perspective, behind the actors... which is a neat touch.

Also, that score on this one by a guy called Brett Detar is actually quite good... probably the best thing about the movie, actually. A shame, then, that Lakeshore Records, in their lack of good judgement, have decided not to issue the score on CD but instead just go for an electronic download. So I guess I won’t get to hear it as a proper stand alone listen now. I would have happily plunked down £15 - £20 on a shiny disc of uncompressed music but, as they say on a certain soundtrack message board, ‘no CD, no sale’.

And that’s me done with Brahms - The Boy II... not a film I’d especially go out of my way to recommend to anyone but not nearly as bad as the first film at any rate. I really hope they don’t try and make anymore sequels to this one though... I don’t think I could handle the disappointment.
Posted by NUTS4R2 at 13:16