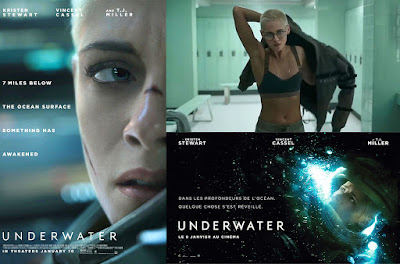 Warning: A big spoiler on the ending
in here, which I’ll flag when it comes up.

Okay, so by far my favourite movie I saw this weekend was Underwater, which... was absolutely less interesting and arguably less original than the other two (The Lighthouse, reviewed here and Birds Of Prey - The Fantabulous Emancipation Of One Harley Quinn, reviewed here) but made up for in sheer entertainment value what those other two lacked. And yeah, this movie was shot three years ago and has been languishing at the studio it was made, Twentieth Century Fox (the last film to bear that name) due to, among other things, the company’s acquisition by Disney.

Yeah, so let out a big groan, perhaps, as I tell you that Underwater is, not so much like The Abyss (as you might suspect it to be) but much more like a seafaring version of an Alien movie (not quite Aliens and the one with the tightest analogy to this would perhaps be the fourth, Alien Resurrection, I think) cross pollinated with The Poseidon Adventure. I wasn’t expecting much from this and it did have a little problem with the ending, I felt but, yeah, like I said it was my favourite of the three I saw this weekend and I had a lot of fun with it.

The film’s main protagonist, Norah, is played by Kristen Stewart... an actress who I’ve only recently discovered (after seeing her a year or so ago in Personal Shopper, reviewed here). She is pretty cool as a technical expert on the crew of a deep sea, submarine station diving rig, one of a family of such stationery vessels situated between 5 and 7 miles beneath the sea. The film starts off with her monologue on the soundtrack, reliving the experiences of her tale to the audience and it’s this specific viewpoint where my one big problem with the film starts up... but I’ll come back to that later. So...

Norah tells us the story from a first person viewpoint and it has a really strong opening... all that stuff you see in the trailer where the water bursts through the vessel and everyone is just trying to survive it all takes place within the first five minutes of the film. That’s just the set up. Two survivors, including Norah, try to get to a less damaged part of the vessel to safety, picking up a few of the crew as they work their way through wrecked areas that they shouldn’t even be able to fit in and while the audience is all holding their breath (I’m assuming everybody else watching movies with scenes underwater do this, it’s not just me right?). The various actors and actresses include T. J. Miller, Vincent Cassel, Jessica Henwick and John Gallagher Jr. (who you may remember from 10 Cloverfield Lane, reviewed here) and, frankly, there’s not a bad one among them. Sure they go through all the clichés you’d expect as they try to plot a course going down to the ocean bed so they can walk many miles to the next base and also figure out what kind of earthquake activity has wrecked their, now less than airtight, submersible home... but that’s okay.

Of course, it’s not long before they realise they are being stalked by the real culprit behind the damage and destruction of, not just their vessel but all the others. Yes, that’s right, a bunch of aggressively violent, sea creature predators who want to eat the human contents of said vessel for breakfast.

And it’s about everything you’d expect from this kind of thrill a minute horror movie but the point is, it accomplishes the little it sets out to do really well. I don’t know who William Eubank is but the direction and whole feel of the film is that someone’s taken an old, much used template and replicated it in a really competent and watchable manner. And you really can’t complain about that with the kind of movie it is, I think.

So yeah, good acting, some nice photography and a score by Marco Beltrami and Brandon Roberts which is good enough to make me lament that there’s been no proper CD release of the thing, just a stupid electronic download. So I guess I won’t be listening to that one as a stand alone then.

Now, normally at this point I would tell you that the film has no surprises but, unfortunately, by the end of the movie is does pull out one surprise but... yeah, it’s not the best thought through surprise as far as I’m concerned. All the way through we’ve been following Kirsten Stewart’s character as she rescues various colleagues from death in various states of undress, finishing in something which is basically just a bikini (did I mention this movie had some spectacular visuals?) but at the end, she pulls a fast one on the last two of her surviving colleagues who she’s finally managed to get into escape pods, surface bound and then sacrifices herself to save their lives. Um... no... what? Yeah, so the person who has been telling us her story on the soundtrack, I think even in past tense for a lot of the film, dies at the end. Frankly, that makes no sense unless you believe she’s telling her tall tale from somewhere ethereal like heaven so, yeah, no marks for the writers here. This isn't Sunset Boulevard.

However, regardless of the ‘quite possibly accidental’ trick ending, Underwater is a solid ‘monsters in the wet’ movie and if you are into those kinds of horror/action pieces, well I think you’ll probably have a good time with it. It has it’s moments and with her ‘shaved head and not much else look’ in a lot of the scenes, Kristen Stewart manages to carry the movie along with her obvious enthusiasm for the role. This is never going to be anybody’s favourite horror movie and it’s not even that jumpy most of the time but it’s a highly competently put together survival horror yarn and I’ve got no problems recommending this to people. Water way to go.
Posted by NUTS4R2 at 12:44