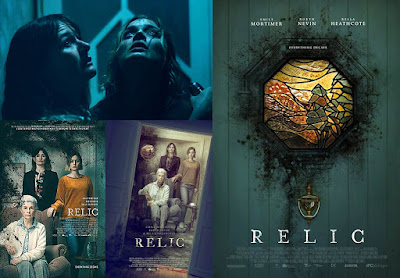 Warning: Some spoilers in order to allow me to talk about the film.

Relic is one of a gazillion similarly named movies and books (just because the film companies and publishers like to confuse everybody) and is the debut 'feature length' movie by Natalie Erika James. The film is ostensibly a horror film but I suspect a certain section of the audience won’t see it as that.

The film starts off with a mother and daughter responding to a call from the police that the mother’s mother has not been seen in a while. Okay, this is going to get confusing isn’t it? I’m going to refer to these people from now on as Grandmother, Mother and Daughter, since there are very few scenes with other characters in them, the film essentially being a three hander about the relationship between these characters and the haunting of the grandmother’s home.

So we have the Grandmother, Edna (played by Robyn Nevin), the Mother, Kay (played by Emily Mortimer) and the Daughter, Sam (played by Bella Heathcote). After searching the area where Gran lives, she mysteriously turns up in the house again after three days but refuses to say where she’s been. Right from the start of the movie, which is a pre-credits sequence where Gran goes downstairs, her bathtub overflowing and, when she turns her back, someone in silhouette at the corner of the frame stands up (this film is all about looking at the edges of the screen as you strain to see the sinister presence), you know something is not right. Once the family is reunited and Mother and Daughter have to stay on a few days to make sure Gran is okay, it starts to slowly become apparent to the two newcomers to the home that there is something else lurking on the property with them.

The shifting sounds, ever increasing brown stains, Mother’s dark dreams and the big black bruise on Granny’s sternum all seem to be indicators that something is not just right. Also, Granny seems to be losing it and... that’s really what the film is about. As the film progresses to the point where the house begins to change dramatically for one of the three characters, who gets lost in a maze of slowly shrinking possibilities, it becomes apparent that, if anything, this film is about a family who are being haunted by the physical manifestation of Granny’s onset of dementia. And this is the point where I think some people will proclaim this is not a horror film... they will just see the visual metaphor and forget that, metaphor or not, the physical manifestation of the idea and its psychological effect on all three generations of the family, firmly pushes this into the realm of some kind of supernatural horror. At least, that’s how I understood it.

Certainly the film is edited and scored with the visual/sound language of a horror movie, lovingly embracing some of the genre clichés like the eerie sounds and dark rooms, setting up a quite effectively creepy atmosphere for the audience. But there’s another thing going on with the audio which I picked up quite quickly in the early stages of the film, where the sound of a conversation with the police is played on the soundtrack sometime after the actual conversation took place, as the Mother and Daughter are on the long drive to Granny’s house. At first I thought this was just a piece of cinematic shorthand to help with the pacing of the film but the director does something else in a similar way soon after...

We have a shot of the Mother sitting at the Grandmother’s old piano and, as she sits there, we hear the sound of her playing the piano for five or more seconds. Then, after we cut to another shot, the visual image catches up to her and synchs up with her actually playing that piano. Now, this is nothing new of course and overlapping sounds from one scene to another can often be a useful tool for film-makers to solve certain problems or maintain a certain atmosphere. This is what I assumed here and I wondered if this was one of those little, tell-tale directorial signatures which we may be seeing more of in Ms. James’ films in the future (I’m assuming someone who can weave a creepy atmosphere like this together so expertly will be given lots of money to continue making films). However, now I’ve sat and thought about it for a bit, it seems that this way of representing sound as sometimes dislocated from the precise imagery may well be another indicator of the influence of Grandmother’s slow descent into dementia. Not certain but, that seems like it could be the case here.

The film maintains a sense of lurking dread and ends, with a somewhat enigmatic but certainly interesting sequence which reminded me, somewhat, of a certain sequence in the movie version of Under The Skin (reviewed here). I won’t go into this but I felt that the ending of the film is, in some ways, a little more open to interpretation and is almost a stimulus for the audience to bring their own baggage along with them when they watch the movie. I might be totally wrong about that, of course but... if I am then I’d love to know just what this last sequence meant. Perhaps a physical manifestation of a state of acceptance but, yeah, you make your own mind up on that one.

And that’s Relic. An unusual sort of horror film with a denouement which pricks the corners of the mind rather than trying to make good on a devastating climax. I mean, there certainly is a climax and you do get the sense that the film is leading inevitably to something but... well... when you get there it’s a soft and deftly executed slow burn of a reveal rather than something which is more in keeping with a traditional horror picture. Relic is a nice, fun little film and it deserves to be a success. I certainly hope this finds its audience. One I’d recommend to all... horror and non-horror folk alike.