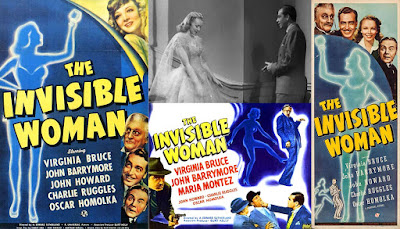 Okay, so next in my list of classic Universal Horror/Monster movies is the third entry in The Invisible Man series... a set of films which I have a hard time of thinking of as either horror or monster movies, to be honest. Most of these are thrillers but there are exceptions and this one is, as it happens, one of those films in the franchise where, around this kind of time, Universal were making some brave and often lucrative choices in the direction they would take the various parts of their franchises. See upcoming reviews of The Mummy’s Tomb and Frankenstein Meets The Wolfman for further elaboration on that comment. Oh... and if you want to read my review of the next Universal Monsters movie after this, it’s been on the blog for a number of years now so, check the link at the bottom of this review.

But for now, lets get back to The Invisible Woman, which is a complete sea change for the franchise (not the last either) in that it’s a light and frothy romantic comedy, reminiscent of those screwball comedies of the 1930s, except with the highly successful invisibility element thrown into the mix. The film stars Virginia Bruce as the title character, Kitty Carroll and, here, she is joined by a number of popular actors such as John Barrymore (as the Professor who makes Kitty invisible), John Howard as the wealthy playboy love interest for the ‘common shop store fashion model’ Kitty and a young Oskar Homolka as Blackie, head of a Mexican crime syndicate who will, as humourously as possible, stop at nothing to get the secret behind the professor's invisibility machine. Also in the film is the Wicked Witch of the West herself, Margaret Hamilton (as the professor’s house keeper), Mary Gordon (who eagle eyed viewers may remember as Mrs Hudson in the Basil Rathbone series of Sherlock Holmes films) and Shemp Howard, famous for being one of the many iterations of The Three Stooges, as one of Homolka’s comedy hoodlums.

And, yeah, it’s quite entertaining. The film sees Kitty answering the professor’s advert for a volunteer to become invisible and comedy hijinks ensue as she falls for John Howard's character and we see the butler getting some terrible, cringe worthy but thoroughly entertaining lines and taking a heck of a lot of falls and trips which seem really dangerous, it has to be said. The dialogue writing is fast and furious and this is just bread and butter to a cast who deliver it in that breezy and larger than life way that was common for the period. Even with the raft of ‘Here kitty, kitty...’ jokes that pop up on occasion.

The invisibility effects are okay but not as well done, it seems to me, as in some of the previous movies in the series. When Kitty is walking around headless in a dress, for example, you can often see feint lines where the head actually was. Some of the other effects such as ‘invisible woman lays on a rug’ or ‘invisible woman sits in a chair’ are okay though and I guess I never really tire of seeing these old visual chestnuts run out time and again. Which probably says something about my age.

We also have a nice moral lesson thrown in for good measure. When the newly invisible Kitty sneaks into work to confront her vile and ruthless boss and gives him a good kicking for his troubles... telling him that she is the manifestation of his conscience... we see the character completely reform and introduce things like tea breaks and ‘not being fired for being ill’ into the job. Always nice to see object lessons taught on screen in this manner.

And, despite this one being one of the shortest reviews in the history of this blog... I really don’t have much else to say other than to note that... The Invisible Woman is the first of the ‘invisible’ films not to use the name Griffin in the story as a nod to H. G. Wells original character and... that this is a unique and thoroughly watchable entry in the series, if a little different in tone to the others (as is the next in the ‘invisible’ series). If you want to read my review of the next film in the Universal Horror franchise, the 1941 character starter The Wolfman, you can read my earlier review of it here, where I’ve coupled it with my review of the 2010 remake. And stay tuned for the review of the next Universal Monster movie coming soon. I love these movies and am going to probably burn through these fairly quickly over the coming months.