Doctor Who - Revolution Of The Daleks 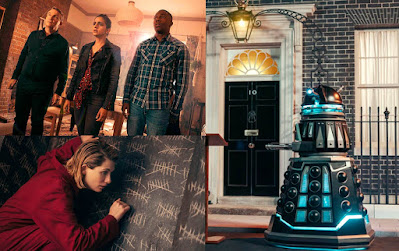 Doctor Who
Revolution Of The Daleks
Airdate: 1st January 2020 BBC 1

Oh well. I had ridiculously high hopes for this year’s pseudo-Christmas special of Doctor Who but Revolution Of The Daleks (which doesn’t actually have a proper revolution in it anyway, by the way) turned out to be a somewhat uninspired rendition of the show, it seemed to me. It wasn’t, by a long shot, what the people I live with thought of the episode... which was that it was the worst ever episode of Doctor Who. Hey, they’ve obviously forgotten the Colin Baker era and, you know, it’s certainly nowhere near the worst episode we’ve had in even the last two years of the show, even. But I think it’s time the people at the BBC started to realise that if you just throw a load of Daleks at an episode and hope they’ll stick, it just doesn’t cut it anymore. Maybe in the height of Dalekmania in the mid-1960s that might work but, ironically, the 60s stories would stand up with or without the Daleks in them, something which no longer seems to be the case.

I had high hopes for Jodie Whitaker when she started this show. She’s a brilliant actor and actually plays The Doctor really well. Alas, she’s just not getting the scripts to match her wonderful interpretation of the role and I really feel for her. Capaldi had the same problem in his first couple of seasons but I think they started writing more to his character’s strengths and he did some good stuff towards the end. I wish they’d think about writing up to Jodie’s version rather than treat her as a magic wand or accessory half the time, which is what it feels to me like they’re doing now.

Okay, so I thought the first ten minutes of the show, the set up, were actually very good. They didn’t feature The Doctor at all and instead looked to set up the story idea and then follow it up by showing how her companions had coped while she’s been in space jail. Bradley Walsh was brilliant as always, Tosin Cole seemed to be playing a more mature version of his original character and, frankly, Mandip Gill absolutely took her performance to a new level here and was, possibly, the best thing about the episode. And even the way it was presented was good for a while. There was an excellent moment somewhere during the first ten minutes where the entire screen was out of focus apart from a tiny flask taking up a very small portion of the bottom left of the shot. I thought it was a really brave moment and wrongly imagined I was in for a good ride.

Alas, this didn’t prove to be the case and the last good thing in the show, John Barrowman returning as Captain Jack Harkness to break The Doctor out of space jail, came way to early in the episode to have any real impact (although it was a nice scene taken out of context) and that kind of set the pace from thereon in, as the show just kept going downhill from there.

It was nice seeing Chris Noth back as the slimy, evil politician type from the spider story from last year but... yeah, well, I guess he’ll be back in a future episode, for sure. Mostly though it felt like the episode was needlessly padded and downright ham-fisted in some areas. For example, we already know that a Kaled grown from the tissue of the one from last year’s New Year’s Day special has taken over various high tech systems, acquired humans to build a clone army of Kaleds and then melted the humans down to use for food. We were then presented with a shot of them all in their little jars in a big warehouse so the full impact can be taken in. Why then, in the scene not ten minutes later, when Captain Jack and Yaz discover this fact, is the whole thing treated like another reveal with a big, pull back of the same Kaleds and a big musical flourish to hammer things home? Old information. We already knew that from a previous scene, thank you and, frankly, it didn’t seem all that worrying then. So, yeah, the whole thing just seemed like a big bag of air being puffed up while we watched it for what was, these days, quite a lengthy episode.

Also... it’s quite established in current continuity that the Daleks have invaded and conquered the Earth in recent history in the show. Indeed, I believe they were even sending humans to concentration camps at some point? Why then, does nobody, including the Prime Minister, recognise them or have even heard of a Dalek? I’m sorry, this just makes no sense now.

And even the good-bye scene, where the much loved Bradley Walsh and the ‘just getting to be an interesting character’ Tosin Cole leave the TARDIS for good didn’t actually trigger any emotion, I felt. And it really should have when we’ve come this far with the characters. So, yeah, sorry, I was just underwhelmed. And then to follow it up with the news, after the end credits, that some stand up comic I’d never even heard of until this moment would be joining the TARDIS crew this year seemed, well, pretty underwhelming to be honest.

So there you have it. Sorry to be so negative about Revolution Of The Daleks but... yeah... they can’t go on like this. I think this show needs a long rest now. Not a cancellation... just a rest and then to have someone comparable to Russel T. Davies to take it into a more dynamic direction. This just isn’t doing it for me at all. Jodie Whittaker is cool though so... yeah, the level of the show needs to rise to meet her, I think.