Frightfest - Beneath The Dark Heart Of Cinema 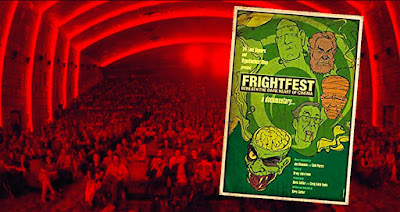 FrightFest - Beneath The Dark Heart Of Cinema is the story of the much loved, annual festival of horror films put together and programmed by four guys - Alan Jones, Paul McEvoy, Greg Day and the often comically dour Ian Rattray. The festival is one I’ve been personally going to, on and off in a less than regular capacity, since around 2004... although I have been going more regularly the last few years. I’m not one of those people who can afford to book a whole August Bank Holiday Weekend pass, I’m afraid to say (I have to just pick four or five films I want to see for the first London Weekend of the year) but I have started going to the Halloween all-nighters they do and, I have to say, I’m always very glad to be there. I think the first couple of times I went to the festival was when they showed Dario Argento’s film The Card Player (I think I was possibly the only one there of the small group of people I was with who liked it at the time) and the time they showed a specific surprise movie, which I’d only booked up for because one of the organisers had accidentally let slip to me in The Cinema Store that it would be a preview screening of Sin City.

This documentary is obviously made with love and talks to a few fans of the events, some of whom have since become directors themselves. It also, of course, talks to the four organisers of the festival and even the occasional famous director or two, plus good footage of some of those directors and the occasional actor actually attending the event, which is nice to see. Fans of the festival will see various FrightFest family friends represented here such as Guillermo del Toro, Adam Green and, of course, The Soska Sisters.

Now, one of the things you’ll find stressed here a lot in the documentary is just how nice the people who attend these things are... and it’s quite true, there is a communal spirit at this particular event which you don’t always get at certain other film festivals such as Raindance or the London Film Festival. I can testify to that even though I’m, like, the least sociable and somehow genuinely unapproachable person on the planet. For instance, I’ve never known Alan Jones (who is famous for a lot of things but for me will always be Dario Argento’s biographer) to not sign a copy of one of his books for me whenever I’ve waved it in front of his face. He’s always friendly and, if you’ve ever been to one of his pre-movie intros, a genuinely funny person. And, even though, if you have a lounge full of chatty FrightFesters gabbing it up while waiting for their next film, I am the one person on his own and looking miserable (come and say hello next time you see someone looking accidentally aloof... if you're lucky it might not be me), even I was approached by one of the writers of a film that was screening one year.

I remember that moment well. I was waiting to meet a friend before a screening of Sadako vs. Kayako (reviewed here) the one time they hosted FrightFest at Shepherd’s Bush (a venue I actually quite liked) and a random guy sat down next to me and started asking me about what I was seeing. He was nervous about the screening of his own film and it didn’t appeal to me, I had to admit but, then he told me about another film he’d premiered at a FrightFest a couple of years before and I remember promising I would eventually get to watch and review that film for this blog. Well, it’s been on my ‘to watch’ pile for around four years now (I bought it the day after he’d started chatting to me) and all I can say is, if he’s reading this review at any point is... dude, I promise I will get around to watching Killer Mermaid soon.

So, yeah, my point being that, even if you are somebody who is particularly out of kilter with life... and  I am forced to consider myself as such... there’s always going to be a friendly and welcoming face at FrightFest and this certainly comes across in this documentary.

It’s also interesting, I’m sure, for those who have actually attended the festival, to be reminded of things that they themselves experienced. It’s been going quite a while now (around 20 years) and it’s beginning to stake a claim in the magical region known as ‘nostalgia’ to a certain crowd I’m sure. I was watching this and Alan Jones commented about something he’d said at one of the screenings and I could remember that moment well. So, yeah, it’s kind of nice to hear a story about a specific screening of a movie when you were in that audience yourself. Its also nice to see footage from various haunts of old such as the Camden Film Fair and, one which may live in infamy and is especially connected to one of the organisers, The Cinema Store...

The Cinema Store in London, for those who never knew it, was an absolute treasure trove of interesting, sometimes unique film related items which were always so expensive that, after a while, people just used to use it as a place to window shop so they’d know what they were looking for and order it for half the price somewhere else. Thank you Jake West, director of one of my all time favourite vampire movies Razor Blade Smile (why isn’t this on Blu Ray yet?), for pointing out the hugely inflated mark up prices on those Cinema Store items. They were a good looking shop though (at the London locations they had, at least) and if you wanted to get a movie or soundtrack sometimes months ahead of it being legally available in the country from which it originated, let alone in the UK, in its proper pressed edition, then this was the shop to get it.

And, yeah, not much more to say but the fans on here just have that huge outpouring of love of the atmosphere of the event to share and you will, if you watch it, get a little more insight on just how the four organisers interact with each other (or just get in each others faces on occasion), from taking in this this wonderful documentary. Not the full skinny, of course, but certainly a flavour of that. This is a nice little film and even if you’ve never been to one before, FrightFest - Beneath The Dark Heart Of Cinema will give you a little bit of an idea of just what this particular ‘horror movie’ community is all about. And, who knows, you might want to go to one yourself at some point... once we are all living in less Covid heavy times.