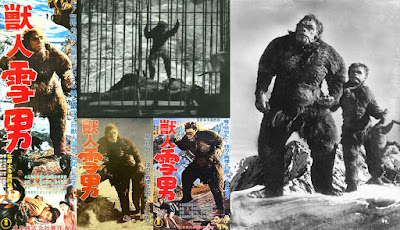 Warning: Some very slight spoilers but probably not enough to warrant stopping interested readers from pursuing this review, I suspect.

Although not his next film after his original Godzilla, Beast-Human Snowman was the second of a steady stream of sci-fi, horror and /fantasy films made just one year after Ishirô Honda’s most famous behemoth, The Big G, was released onto Japanese screens.

Yeah... so this film was released to cinemas for a short while by Toho in Japan before being 'unofficially banned’ by them, due to various misconceptions (and possibly the nation’s collective guilt), about the depiction of the mountain tribe in parts of the film who, like the title character,  live on and around Mount Fuji...  many of whom appear deformed due to in-breeding. As such it’s never been released onto any home video format (it was almost released once on VHS tape but got pulled at the last minute) and has remained largely unseen apart from a print which, very occasionally, gets screened at Ishirô Honda film festivals in Japan. I can only assume that’s the source for this blurry transfer of, what looks like a pretty good print, which I purchased from one of the ‘usual kind of places online’, because I didn’t want to end up dying at some point before ever being given the opportunity to watch this film.

It’s true, the usual truncated recut for American audiences, called ‘Half Human’ in this case, was released into cinemas in 1958 but, from what I can understand, this is probably the most compromised version of a Japanese film recut for American release that I’ve ever heard of. Reportedly, between various scenes utilising footage of John Carradine in a new, grafted on and tonally changed story, only half an hour of footage from this original Japanese version found it’s way into that re-cut, by all accounts. So, frankly, I was willing to take a punt on the possibility that the print here might be totally unwatchable in the hopes of being able to see this at last. As it happens, the print is pretty much like one of those bad transfers of old movies at the dawn of DVD so... yeah, quite watchable depending on your expectations, I suspect.

It’s also, as it turns out, another early masterpiece from Honda and, frankly, it’s a crime against filmanity that a film this good has been left to wallow unseen for, so far, 66 years. This needs a decent Blu Ray print released on the double but I suspect the chances of that happening in my lifetime are slim to nothing.

The film starts off in a grim setting... a kind of station waiting room in the rain where a reporter finds a small group of Alpine Club members deep in gloom. They have been to find out what happened to another party lead by a professor who is a brother to one of them. A woman in part of this second expedition, played by Momoko Kôchi, also has... well, had... a brother on the first team but they find his remains a little while into the movie. Apart from one brief cut back to this scene a third of the way through... and then back to it at the end of the movie, the entire film appears as a flashback as told to the reporter. And what a film it is.

After finding the remains of one person, they wait and go back after the ‘spring thaw’ to resume their explorations. Meanwhile, another outfit trying to discover the ‘big foot’ creature that lives there for exploitation purposes, in the tradition of King Kong but more ruthless and unrelenting, are keeping an eye on them without them being aware of their presence. And also, the mountain tribe I mentioned earlier, with the beautiful village daughter played by Akemi Negishi (who was discovered by Von Sternberg and who you might remember from roles in such films as Lady Snowblood and the Female Prisoner Scorpion movies), is a third ‘interested party’ in that they help feed the bigfoot and his son, worshipped as deities in the village.

And there are a lot of shenanigans and twists to the story which I won’t relate or spoil here but, I will say that, at no time, is the title creature presented as anything other than a pacifistic, non-threatening and tranquil creature, completely worthy of our sympathies. Indeed, when one of the characters is being held prisoner and left dangling over a mountain for vultures to finish off, the creature pulls him up and then frees him from his bonds before going peacefully back to what he was doing. Indeed, the only time the creature becomes aggressive and wilfully violent is when, upon regaining consciousness after his son attempts to rescue him, he sees his young ‘un shot to death. So he first kills the people involved with the murder before going to the village of the local tribe and tearing through it in a frenzy of revenge (the tribe actually had nothing to do with the death of his offspring but, he has no way of knowing that as he now obviously sees humans as treacherous and dangerous).

It’s a beautiful looking film shot with a group of actors who are all highly convincing (even the larger than life, evil stereotype of the fortune seeking entrepreneur serves the film well) and also, it has to be said, very familiar. I think I recognised a few members of Akira Kurosawa’s stock company of actors here including the ‘morale booster’ character from Seven Samurai.

There are some great compositions in the 4:3 aspect ratio and Honda uses the frames well, especially in the group shots where everyone seems to be on the screen without the shots seeming over crowded. Also, there are some great skiing shots where big, diagonal swathes of snow take up a lot of the composition as the team of the Alpine Club glide across the frame. There’s even one shot which reminded me a little of a moment in a Kurosawa film called Stray Dog, where he goes to an extreme amount of non-action space on a frame. In this case, we see a big mountain valley and, at the very bottom of the shot, like ants and taking up less than a 20th of the vertical space, the small group of the expedition are walking from one side of the frame to another, almost hidden before the eye is attracted to the movement.

Added to all this, there’s some interesting stuff where the camera shoots through undergrowth and we can just make out the movement of a figure behind it all. Are we watching one of the party or a bigfoot, seems to be the challenge of shots like this and, I have to say, they fit in really well.

The film is genuinely intriguing and atmospheric too, primarily in the way the tension is ratcheted up before the audience is let in on the true, peaceable nature of the title creature.

One such scene is when the expedition first go to find out what’s going on and are staying at a log cabin (where they meet Akemi Negishi’s character the first time). In one sequence where the gloomy tension and mood of the expedition is dominant, the silence of the room is first shattered by the hourly warblings of a cuckoo clock before immediately being followed by the sound of a phone ringing. When one of the party answers it, we hear yelling, the wailing of a beast and a shot, heralding an ominous atmosphere of a potentially hostile creature (later we find that the creature was trying to rescue and care for an injured party but, by then, things have escalated).

Another great sequence full of creepiness is when we first meet the bigfoot. Momoko Kôchi’s character is sleeping in her tent when, in the window of the canvass just above her sleeping form, appears the face of the creature. It then reaches inside an opening in the tent with its hand and, out of curiosity, starts feeling around her face before she wakes up and screams in terror. It’s a nice moment and also our first inkling that the ‘Beast-Human Snowman’ is not the aggressive creature one might expect in this kind of genre movie.

And that’s me more or less done on this one. Masaru Satô’s score is perhaps less striking than I would have expected from him but perfectly suits the mood and tone of the picture. There’s a bit of an error when you may realise that many of the events being told by the returned party and conveyed to the reporter are not anything the Alpine Club members could have possibly had any knowledge about but, I think I’ll kindly put that down to framing the whole story for the audience as opposed to the first hand knowledge the reporter is getting. Artistic license and all that.

Whatever its very minor faults though, make no mistake, Beast-Human Snowman is one of Honda’s best films and, like I said earlier, it’s a real crime that this one has not had a release and that, at time of writing this article, most people haven’t seen the film and a lot of people are probably even unaware that this film exists. So, in the end, yeah, I was glad I paid the money on this one and am really happy to have been given the opportunity to see it. If you are a fan of Japanese fantasy films of this type, you may well want to try and track down a source for this one. Great movie. Deserves a proper release.