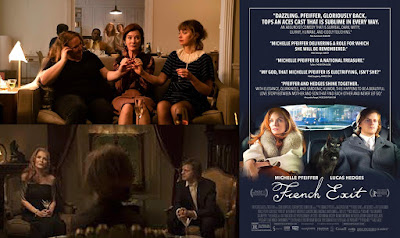 I was scanning my local cinema listings to try and find some movies to watch before the ‘end of cinema’ comes... at least for me for a while... and possibly everyone if current political trends stay. By current political trends I mean the sheer stupidity of opening up the UK when the current pandemic has alarmingly rising infections and the so-called vaccines the government is risking its gamble on (and I’m double jabbed myself at time of writing, although I expect it’s worn off by now) is proving more resistant to our medicines and with future virus mutations more likely. And by death of cinema, for me at least, being the only way I feel I can survive right now is to once again retire from going to see films at my local flea pit once the social distancing is dropped in a couple of weeks time and be conscious of the fact that, once the youth of our society realise that places like that are a hot bed of infection, the attendances will probably drop below sustainable figures. Can’t show movies to an audience that are in bed recovering, after all.

So, I bought five tickets for screenings before the 19th July, so I can at least identify in years to come what may well turn out to be my last films in a proper venue. I sincerely hope I’m wrong on that and the cinemas continue to practice distancing and so on after the stupidity of the government’s latest betrayal threatens us but, knowing Cineworld and others as I do... I’m not counting on it.

Now, I didn’t know anything about French Exit but I clung to the hope that maybe my local were finally screening a French movie. Well, it wasn’t but I took a peek at the trailer for it anyway, was slightly intrigued and thought, why not? I’m so glad I was in that frame of mind because, honestly, I don’t get enough movies like this in my life these days. Not because I don’t want to see them but because they’re becoming a scarce commodity in a superhero, sci-fi and horror saturated world. Don’t get me wrong, I like those too but they’re kinda forcing everything else out of the mix at the moment. The fact that there were only two other people in the audience when I saw it says a lot about why these kinds of films aren’t thriving at the moment. Only Wes Anderson and Woody Allen are regularly making these types of movies on my personal radar so, any chance at something like this is a treat.

The film is based on a novel by Patrick DeWitt, who also wrote the screenplay. I don’t know who this guy is but I know I’m going to have to pick up the novel sometime soon. The writing is strong and when you give it to a bunch of actors of this calibre, then a competent director is going to spin some gold and, in this case, director Azazel Jacobs proves himself a lot more than competent.

The film tells the story of a rich widow, Frances (played by Michelle Pfeiffer... I think this is the film I’ll always think of her in from now on... she fits the character like a glove), who, after getting out from jail for a brief period, because people mistakenly thought she killed her husband, springs her young, estranged son Malcolm from boarding school and it’s this scene which starts the movie. We then jump twelve or so years in time, when Malcolm who lives a rich and non-employable life with his mum, is now played by Lucas Hedges. Then Frances’ accountant tells her she is about to become completely insolvent, advises her to sell everything she can for quick cash and that’s that. Her friend has a large apartment in Paris and lets Frances live there. So she and Malcolm go, leaving behind Malcolm’s distraught fiancé Susan (played by Imogen Poots) and Frances follows her plan of living there until the money runs out, at which point she will kill herself. They take with them their cat who, she believes, now hosts the dead soul of her husband... I won’t say too much more about the cat here other than, there are a couple of very funny and also quite moving seance scenes in the film.

And, as she lives there, Frances’ new place becomes a kind of home for odd people who seem drawn, in one way or another, into her orbit... including stand out performances from the truly delightful Valerie Mahaffey as Mme Reynard and the absolutely amazing Danielle Macdonald (from Patti Cake$, reviewed by me here) as Madeleine the medium.  Hedges is also brilliant here as Malcolm, an emotional but muffled son trying to carry on living comfortably with the dominant personality of his oddball mother and, it seems to me (and something I’m a little familiar with myself), grieving his future. And it’s truly delightful, a low key and slow paced kind of comedy drama which harkens back in terms of characters to those old screwball comedies of the 1930s and 40s, when a community of odd people find themselves gathered together and their eccentricities spill over into the other characters they come into contact with.

And I don’t want to say much more about it than that. I wasn’t sure of it for the first ten minutes or so but it slowly began to enchant me with the quality of the writing, the performers’ response to that writing and also the low key but wonderful, consistent score by Nicholas deWitt which infuses the whole thing with something not unlike the spirit of Vince Guaraldi, watching over the whole proceedings. Indeed, the whole movie seems a little bit like the characters are living their Charlie Browniest lives. I don’t know who this composer is but I can only assume he’s related to the writer (or is the writer under a pseudonym) and it looks like this is the only things he’s scored.

The end is perfect too. It doesn’t finish quite where you think it will, where the implication of the final shot in a scene implies all you need to realise what has happened... nor on the aftermath of the scene, where various people scatter and seek the implied truth for themselves. Instead, we cut back to the very first scene, some twelve or more years before... with a follow up sequence to Frances breaking Malcolm out of boarding school and the start of their relationship, which more than gives a clue about the motivations of Frances’ personality and driving force in all of this. And it’s a perfect way to end the film and I think I’ll just leave this review here and say... French Exit is an absolutely beautiful movie and I’ll be first in line in the internet shopping cue when it becomes available on Blu Ray (I hope this gets a proper release). Lots to recommend in this one. Don’t miss it while it’s in cinemas and social distancing is still just about clinging on in this country.