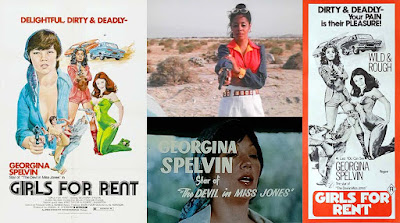 Warning: Some spoilers... if you care about such things in an Al Adamson movie.

So next up in my journey through Severin’s beautiful box set Al Adamson - The Masterpiece Collection is Girls For Rent and, like a lot of his films, I really wouldn’t take this one at face value based on any expectations inspired by the title or marketing campaign. It has very little to do with the prostitution racket, for example... that’s just a backdrop to kickstart the actual story of the movie. That being said, it’s not a dud as such and, in some ways, is one of his more entertaining movies.

It starts of with a bunch of lady prisoners working on a road, two of whom create a diversion. One of them, Sandra, played by hardcore porn actress Georgina Spelvin, runs in one direction and is being chased off by a guard. A whole large bunch of the prisoners manage to escape in the prison van and... then just drop out of the story. You never find out the fate of all the other ladies who escape. Meanwhile, a car is waiting by a road and another girl, who is a syndicate enforcer named Erica, played by Rosalind Miles, can see Sandra is having trouble getting to her rendezvous point so she pulls out a six shooter, attaches a silencer, followed by some other bits and pieces, to turn it into a really cool little rifle-pistol of some kind... and then shoots the guard, allowing Sandra to catch up to her so she can whisk her off.

Sometime a little later, Erica takes Sandra to see her boss Marino, played by Adamson regular Kent Taylor, who had conceived the plan to spring Sandra from jail. He wants her to join his mob which runs prostitutes and thieves and he puts her in charge of his assassination division. Her first job is to head up the assassination of an important client who also uses his hookers... so Sandra and Erica persuade the film’s main protagonist, a sex worker called Donna (played by Susie Ewing), to slip the client a pill to make him groggy under the pretext that they need some incriminating photos of him and to signal them to come into his place when he slips under. Unknown to Donna, though, is the fact that Erica knows he has a weak heart and this pill will finish him off... which it soon does. However, while Sandra and Erica are driving the corpse away, Donna decides to split and heads off on the road to Mexico, to hide with a friend of her sister.

So that’s all just the main set up and... this is where the movie takes its split away from any expectations you might have been having about what kind of film it was going to be and suddenly turns into a chase movie for the rest of its running time. And there are all kinds of shenanigans once Donna forces the pursuing Sandra and Debbie off the road. Almost everybody in this film is dogged with bad luck. Their cars keep breaking down in the desert, or a car is stolen or a truck runs out of gas. After escaping an old man played by Robert Livingston (from The Naughty Stewardesses and Blazing Stewardesses, both of which you can find reviewed by me here), who captures Donna to have sex with his backwards, hill-billy son (who doesn’t even understand what sex is), she eventually ends up trying to get to the nearest inhabited town with a guy called Chuck (played by Preston Pierce from Angel’s Wild Women, which I reviewed here), but the two hit gals catch up with them and have an old cowboy movie style shoot out in the rocks (which of course, comes very naturally to Adamson given his family lineage and sensibilities... read my review on the outstanding documentary about his bizarre life here for more details on that). I won’t say much about the twists and turns of the ending but I will say that very few characters survive the film and leave it at that... which seems to be a pattern in Adamson’s work from this period, it seems to me. I think these movies have a bleak, nihilistic tone to them which I suspect, from the stories told by the people who loved working with him, didn’t necessarily reflect his personal outlook.

That being said, I understand he really didn’t get on all that well with porn actress Georgina Spelvin on this shoot, especially since she refused (not unreasonably in terms of health and safety I suspect) to do certain scenes in the original planned demise of her character. That being said, due to her career in pornography, she is able to provide the kind of nude scenes associated with this kind of movie, although Adamson always seemed uneasy with shooting them, it seems to me. So, for instance, there’s a scene where Erica and a topless Sandra get in a fist fight and take out three guys before stealing their car, which was nicely staged and looks good on film. There’s also a scene where she’s sexually riding the old guy’s backward son and, just as he reaches orgasm, she blows his brains out with her six shooter. So, yeah, she was obviously down with the nude scenes (as is Susie Ewing in one memorable moment) but, well lets just say that Adamson never worked with her again on a project.

The film has the occasional interesting photographic flourish reminiscent of some of Adamson’s earlier films where he was using ‘future famous’ cinematographers... like a shot through a wine glass half covering the face of a corpse... but mostly the film is very much a road movie and there’s a more kinetic and ‘just shoot what you can get’ feel to the proceedings. Surprisingly, though, this doesn’t do the film any harm and I have to say I was quite taken with Girls For Rent. I could see this one doing really well as a double bill with something like the Japanese classic Sex And Fury and I may well show those together myself for some friends one day. One of Adamson’s more interesting movies, for sure, in a career which, so far for me, has proven to be full of ups and downs. However, the movies were usually so cheap to make that they did rack up huge profits and I believe the same can be said of this one.