Doctor Who Flux - War Of The Sontarans 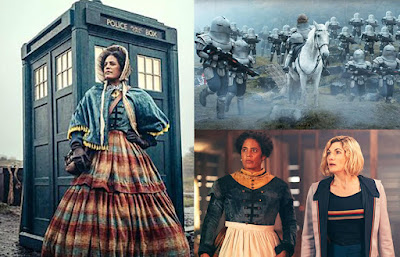 Wok Around The Clock

So Jodie Whittaker returns as The Doctor once again in the next installment of the Doctor Who Flux storyline, along with Mandip Gill as regular companion Yaz and John Bishop as new companion Dan. In this episode, the Flux which took a charge at the TARDIS in the previous episode causes said TARDIS to be thrown back to the Crimean War in a story segment called War Of The Sontarans.

And that’s exactly what the three of them find in the Crimean War... that Russia never was and that Sontar exists in its place, with the Sontarans fighting the British. They also meet historical nurse Mary Jane Seacole and, when Yaz and Dan are mysteriously flung out of this time zone and location by forces unknown, The Doctor uses Mary to help defeat the Sontarans, with a little bit of help from Dan, armed with a Wok to bash the Sontarans up on the little weak spot on the back of their heads (their probic vent)... and his designated Dog-man, who have now pitched up back in 21st Century Liverpool, which is also now run by Sontarans.

Meanwhile, Yaz and a guy who was scooped up from his galactic probe in last week’s episode, called Vinder and played by Jacob Anderson (who was apparently a star of Game Of Thrones? I’ll ask my girlfriend.), seem to be caught up in a scheme by the super villains of the piece, who call themselves The Swarm. They have partially destroyed the guardians of a structure which prevents all of time from doing nasty and unexpected things which, frankly, it’s doing a lot of right now... what with the Sontarans launching a kind of time pincer attack at various points in Earth’s history with their collective cry of “Sontar-Ha!”. That’s their basic tenet I guess (I’m here all week folks!).

And... it’s not a great episode by any stretch. And it’s also not a terrible one. I don’t particularly like The Swarm all that much but they are certainly an intimidating and ruthless lot of villains, for sure. I’ve never liked the Sontarans all that much, even when I watched them back in the 1970s when they made their first appearance opposite Jo Pertwee’s incarnation of The Doctor. The only time I enjoyed their presence was when they introduced Strax into the series.

So I was particularly annoyed at the missed opportunity that one of the Sontarans fighting here didn’t get left behind in Victorian times and turn out to be the very same Strax... and that’s how he ended up on Earth with a Silurian and her human wife as a Victorian detective team, as featured in previous episodes of the show during Matt Smith’s tenure. That being said, I kept thinking that would happen because Dan Starkey, who played Strax the Sontaran, is also in this episode and, well, one Sontaran looks and sounds more or less the same as the next, I guess.

But while I’m talking about Strax... another thing which annoyed me is the fact that we are told the Sontarans need to collectively return to their ships for seven minutes out of every 27 hours to top up their uniforms, which apparently allow them to survive on Earth. First I’ve heard of it, especially since Strax was as likely to be wearing an evening jacket or suit for dinner in previous episodes of the show set in Victorian England... so, yeah, just make those new rules up with no concern for the continuity errors you are causing in the previous stories guys... I’m sure the Doctor Who fan base will thank you for that one.

Okay, the special effects were okay for a BBC production, the actors all good and the story was, well, it would have made a good Target novelisation back in the 1970s but this felt a little underwhelming as an episode, it has to be said. But, like I also implied, not so terrible that it was as bad as some of the stories we’ve been getting over the last few years. I was a bit upset that, once again, the writers played the old ‘the alien race is fleeing but the somewhat evil human ally is going to take the opportunity, when their back is turned, to slaughter them anyway’ card... we’ve seen this done so many times on the show that it’s become an unloved cliché as far as I’m concerned.

And that’s me done on episode two of Doctor Who Flux: War Of The Sontarans. A very short review and I apologise for that but I’m not going to pass judgement too quickly because I’m aware that we are only seeing one fragment of the overall story here... although it looks like they’re just hitting set pieces and then linking it with an underlying arc to help cement unrelated adventures together, to be honest. Although, there’s more of the underlying arc showing than there usually would be in recent, previous seasons, I’ll give them that. So, yeah, anyway, next week we’re back with the Cybermen making an appearance so... lets see how that one goes. We’ll be halfway through the series already by then.