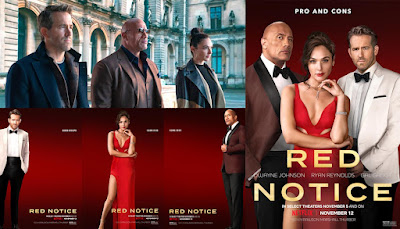 Warning: A very minor pointer to a possible spoiler.

Okay, so I don’t quite know why this movie has been getting some mixed to bad reviews but, I have to admit I kinda liked it. I don’t think the three lead actors... Gal Gadot, Dwayne ‘The Rock’ Johnson and Ryan Reynolds had bad chemistry at all (as has been suggested) and my only real disappointment with the movie is that it telegraphs itself a little too much in terms of something which happens much later in the movie.

So the plot of Red Notice is all to do with the three famed ‘Eggs Of Cleopatra’... three bejewelled eggs crafted as gifts for Cleopatra (which are a complete fiction and conjured up entirely for this film, of course). Anyway, these fabled eggs... err... fictional fabled eggs, are wanted as a wedding gift by a rich sultan for his daughter and he has offered 300 million dollars for the person who can secure all three. Cue various international art thieves trying to steal the three from their known owners with the one twist that Nolan Booth (played by Ryan Reynolds), international art thief, is one of the few people in the world who actually knows the location of the third egg. However, an FBI agent, John Hartley (played by The Rock) and his new partner Inspector Das (played by Ritu Arya who feels like a mega-star in the making and really needs to get some higher profile roles) track him down while he’s trying to steal the first egg and capture him... but not before the international art thief known as The Bishop, played by Gal Gadot, makes off with the egg for herself.

Furthermore, she frames Hartley for the theft and he ends up in a Russian fortress style prison with Booth as his cell mate. After they escape, they go after the second egg so Booth can get his reputation back and Hartley can arrest The Bishop.... both pursued relentlessly by Inspector Das as the two become partners in crime etc. So yeah, simple plot set up and it sings along fairly nicely as an action comedy. There’s a good amount of action and the opening chase in and around a museum exhibiting the first egg is pretty great. There’s a lot of comedy (as you would expect with Ryan Reynolds involved) and fortunately Gadot and The Rock are pretty good at comedy too.

There are also some nice metatextual references throughout the film, mainly coming from Reynolds character who, I guess, we are all used to making such references from films like his turns in the Deadpool franchise. For example, he directly refers to one of the eggs as a McGuffin at one point (if you don’t know what that is then google it) and in one scene where he’s filling in The Rock (and therefore the audience) on the specifics of a plan, he refers to the bodyguards and party goers in a sequence as ‘featured extras’. Also, when he and The Rock find themselves in an underground Nazi bunker in Argentina, as well as a quick shot labelled up as the wooden crate which housed the Ark of the Covenant in Raiders Of The Lost Ark, Reynolds has also just been whistling the Indiana Jones theme. I have to say though, in the trivia section on the IMDB, it’s noted that Steve Jablonsky’s score for this movie is very much like the Indiana Jones films and, well, I’d have to say I disagree on that count. Jablonsky really does not sound like John Williams (and vice versa for that matter so, I have to wonder who the heck is writing silly things like this on the IMDB these days).

My one disappointment stems from a ‘surprise reveal’ near the end of the picture. Spoiler... it wasn’t in any way a surprise. By the time I was half way through I’d picked up on something pretty basic about the relationship between two of the characters which was saved as some kind of plot twist for the last ten minutes or so but, honestly, this was telegraphed in the film way too much and I suspect most audiences would have seen that one coming an hour before this point in the picture. So, yeah, that did put a kind of dampener on things by the time it comes up.

That being said, though, the film is still a speedy and entertaining action comedy starring three of Hollywood’s A list actors who are all old hands at this kind of thing. So it’s still a joy to watch even if some of it is a bit obvious. At the end of the film a ‘Red Notice’, aka a high level, Interpol watch notice, is put on certain characters and everything is nicely left open for a sequel, should that be required. Well, all I can say on that one is... sure, I’d watch a sequel to this. Especially since the audience wouldn’t then have to spend the entire movie waiting for one of the characters to catch up to them in regards to the central ‘twist’. I had a good time with Red Notice and, if you like big action films peppered with a fair few one liners and a comic tone, then you shouldn’t have much of a problem with this one, I suspect.