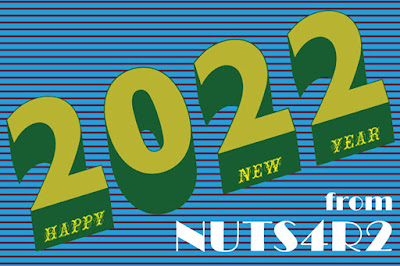 Well that’s another year over and another year of Covid behind us (that should leave us with only another four or five years of Covid misery to go before the required global collaboration to defeat it kicks in, is my guess). I’d like to take this opportunity to wish all my readers a Happy New Year and say thank you to first time and regular readers alike.

By way of a quick preview of the next one or two years, depending on how quickly I can get posts up, I will say that, midst many reviews of things which are unknown to me (but will hopefully prove interesting), there are some certainties for sure, in the works. As long as I stay in good health and financially solvent, that is.

For instance, the last of my Showa era Godzilla reviews should be up sometime within the next week and also the last few reviews of both the Classic Universal Monster movies (although certainly not all their monster movies for sure... more will eventually follow) and the rest of the Gamera series should be following soon after. Plus, there will definitely be reviews covering various boxed editions... so look out for running series of reviews on William Grefé, Bill Rebane and Yokai Monsters. Those ones are at least certain to come up this year. I’ve also got reviews of the complete run of The Falcon movies and the short run of cinematically released Perry Mason movies completed and waiting in the wings. As are a bunch of Jean Rollin movie reviews. Plus, oh yes, lots of classic Doctor Who stories.

I’m also hoping to finish revisiting the Hammer Dracula films on Blu Ray and, in time, their Frankenstein series... along with a whole raft of other movies from the famous British studio. I also intend to finally dig into those two Sam Fuller boxes from a few years ago... not to mention some more Harryhausen, Corman’s Poe pictures and a revisit to Universal’s Inner Sanctum series of movies. Throw in a whole raft of giallo and horror titles plus some Kolchack and, yeah, I’m hoping it will be a good year for the blog. Plus, loads of surprises which I don’t even know about yet. Most importantly, perhaps, I need to work my way through Severin’s The Eurocrypt Of Christopher Lee set and, fingers crossed, their All The Haunts Be Ours box of folk horror should also be pitching up on these shores over the next week or two.

Now I come to think of it, I need to get back to Zatoichi and The Sleepy Eyes Of Death movie cycles sometime soon. So, yeah, a full slate of things to come which, yeah, they could take a while to get through. But there wil be lots of non-series films and TV shows in various genres and from various times to throw into the mix too.

I hope at least some of those propositions sound appealing and, once again, Happy New Year to you and thanks for spending some time here. Stay safe!
Posted by NUTS4R2 at 09:29