The Falcon Out West 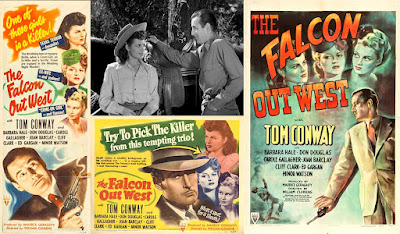 The next in the series of The Falcon films, following The Falcon And The Co-Eds (reviewed here), starring Tom Conway as Tom Lawrence, sees the titular character, spreading his metaphorical wings and flying further afield, as the title suggests, in The Falcon Out West. And, once again, it’s very much a change of pace for the detective as he finds himself caught up in a plot which shifts to a standard Western movie, along with horse riding, gun play, cowboys and even a few Indians.

The Falcon attends a night club party, as an observer from another table, for a Texan who is due to be travelling back that night with his new fiance, who he plans to be marrying very soon. Tom Lawrence is there because the gentleman in question’s ex-wife suspects the new fiance is there purely for his money and not his heart. The Falcon declines the case until, before his and all the other guests’ very eyes, the Texan drops dead from a rattlesnake bite. Obviously, though, there are no rattlers to be found on site and things look fairly peculiar. The police, in the form of the series regulars Cliff Clark as Inspector Donovan and his flat foot sidekick Edward Gargan, playing Detective Bates, show up and start questioning people. While this is going on, The Falcon notices the fiance, played by Carole Gallagher, slipping away with one of the railway tickets... so he steals the other train ticket and travels back to the Texan’s ranch with her. When they get there the next day, her lawyer plus Donovan and Bates turn up and... all five of them take a coach to her ranch to stay, while they find out what’s at the bottom of the murder.

The stage goes out of control when a few shots are fired at it but they are saved by another of the female leads, played by Barbara Hale doing her best Roy Rogers impression. There’s another murder, a warning to The Falcon in the form of a death threat scalp held in place on his door with an evil looking blade, horse chases, attempts on various people’s lives and, much as I’d suspected, a special ring with two retractable snake fangs which hold enough venom for three. It’s  the usual shenanigans, which are always usually good enough, spiced up with cowboys and cowgirls and a nice ending where it turns out the very first person suspected by the police is actually the real culprit after all.

Points of interest might include a nice line of dialogue when someone is described as a good driver of the out of control stagecoach, when The Falcon quips that they’re from “the Ben Hur school of driving.” Of course this was in reference to the famous chariot race in Ben Hur but, at the time this film was made, which predates the famous Charlton Heston version by some years, the most recent version was the silent version from 18 years before this film (which I reviewed here)... so it’s interesting that this particular version was still very much in the public consciousness  and that the writers could get away with writing throwaway one liners about it like this.

Since the whole story is set, for the most part (barring the odd chase scene or two and the opening sequence), on two ranches... and since the police have travelled down to be on the scene... Clark and Gargan have much more to do here than they do in their usual Falcon series appearances, although their regular running comical joke, sadly doesn’t make a reappearance here. Alas, this was to be the last appearance of these two characters, who bow out of the series at this point. I can’t remember back to the last time I watched these (in the early 1980s) as to whether they were replaced by regular characters or different equivalents in each film but there were five more of these films after this one so, I’ll let you know.

In the last review, for The Falcon And The Co-Eds, I mentioned that the regular feature of The Falcon being called to another case might actually get a follow through on this movie. I was basing that on what I read on the IMDB and, once again, the IMDB totally let me down. It doesn’t follow the last one at all. This one has another ending which sees The Falcon taking a train to Havana at the urge of another young lady. Well, I’m guessing it won’t tie up with the next film in the series either, which is called The Falcon In Mexico but, well, I’ll just have to wait and see. The Falcon Out West is another fine film in the series but I wouldn’t call this one a jumping on point in any way because, well, it’s not the lead’s usual setting and so has a slightly different flavour than the regular capers. It’s also not nearly as entertaining as the previous film but, still, an enjoyable watch and I’m looking forward to where they go next.