The Falcon And The Co-Eds 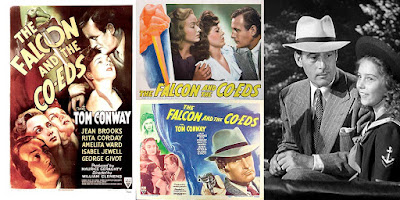 And so onto the next in the popular series of films based on The Falcon character of the 1940s, The Falcon And The Co-Eds. This one has a kind of different atmosphere to the preceding films but then, the series does seem to keep reinventing itself in both big and small ways as it progresses. For instance, Tom Lawrence has no real assistants in the mystery solving department in this one and not much in the way of romantic interest either (not a single fiancé in sight and I think the young ladies in the film, who are college students at Bluecliff Seminary, are supposed to be slightly underage for anything intimate for the most part but, again for the most part, I would say the actresses playing them are not).

Now, I had no idea what a co-ed is because we don’t have the term in England but, apparently it’s some sort of slang for a woman studying at a mixed boys/girls school or, as in this case, college. I’ve also still no idea why the term is applied in this title because, well... it’s an all female school (apart from one of the teachers... two if you count the first murder victim, who is dead before the story even starts) and so the term seems to be complete nonsense if you ask me. Still, it may mean something more to an American audience perhaps but... I’m not getting any help from the definitions found on the internet, it has to be said.

Okay, so Tom Lawrence, alias The Falcon (played once again by Tom Conway), is called in by the student daughter of a friend when it’s common knowledge, due to the psychic prophecies of one of the girls, Marguerita (played by Rita Corday), that one of the teachers has been murdered rather than, as one of the resident doctors who teaches psychology there has signed on the death certificate, suicide. In fact, Lawrence is pretty much compelled to be there, actually, when the gal steals his car to get him to the seminary to retrieve it. The so called suicide is hushed up because the head mistress doesn’t want to bring any hint of scandal to the college but, it’s not all that far into the proceedings before she herself is run through and killed with a fencing sword by a person unknown.

So The Falcon, posing as an insurance investigator, is roaming the campus trying to solve the mystery and, somehow, the police end up on the grounds pretty soon too. Actually, the two police who are the regular guys, Cliff Clark as Inspector Donovan and Edward Gargan as his sidekick Detective Bates, are pretty important here to help remind audiences that they are watching a Falcon film, in some ways because, as I said, this isn’t the usual milieu inhabited by the central character. I’m happy to say that the running joke dialogue between Donovan and Bates has been reinstated for this movie, after a curious absence from their regular repartee in the previous film.

Of course, there’s no question that The Falcon will eventually find the real culprit behind the murders but he comes to it pretty late and, I have to say, I was pleasantly surprised that the solution this time around wasn’t at all easy to work out. I only had my suspicions about the same time Lawrence figures it out near the end. I think part of the reason for this is that it's put together just like one of those typical Italian gialli films in terms of the amount of characters who could have done the deeds. There’s an abundance of suspects and, like a giallo, one of the prime ones is suddenly bumped off half way through the film, eliminating her from the long list of possible suspects.

It’s fast paced enough with some humorous dialogue and even some natty song and dance numbers thrown in. For some reason, because of the fact that some cliffs factor in to the story at some point, the director chooses to not only have the dreary credits sequence filled with a picture of the rolling waves of the nearby sea but also seems to use it at least four times throughout the film as some kind of transition shot... although it establishes really nothing in terms of connecting the scenes in any useful manner, it has to be said. Also, though it’s quite clear that much of the film is shot on location, including many of the cliff scenes, there are also some quite ham fisted examples of visual effects which do tend to get in the way of total immersion into the movie. Such as a few shots of Conway and some other actors walking along the cliff with it clearly being a back projection and the cast walking on a treadmill. Or some worse shots where two of the characters are clearly superimposed quite badly when standing on a cliff’s edge.

It’s also very much of its time too... as shown by a scene where The Falcon picks up one of the college girls (the actress was 20 at the time) and giving her ‘a good spanking’. Which is something that many young audiences watching these days would make a fuss about but, honestly, even in the 1970s when I first saw this film, it wasn’t really anything anybody would bat and eyelid at. So, yes, this film probably wouldn’t win any awards with the fashionably woke brigade but, The Falcon And The Co-Eds is still an enjoyable romp and, just a little bit different from the atmosphere of the preceding stories, as I said earlier. As usual, the film ends with the title character being cliff hangered onto another case and, I believe for once the dangling plot line left here as a punchline might actually get picked up in the next film in the series. So I’ll report back on that one when I revisit it again.