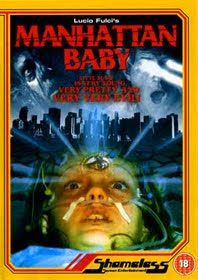 Manhattan Baby Italy 1982
Directed by Lucio Fulci
Shameless Screen Entertainment
Region 0
In lieu of a spoiler warning for this, probably quite short, review... I thought I’d quote you from the back cover of the DVD itself by way of an explanation. And I quote from the uncut Shameless edition that I watched this on... “Most DVD sleeves will give you a succinct plot synopsis but we’re still struggling to understand what the hell goes on in this movie.” And: “... makes up in classic set pieces and pierced eyeballs what it lacks in coherence.” So I don’t think spoilers are really an issue with this movie, to be honest.
I rarely find myself bringing up the name of Lucio Fulci in conversation about film because, as I’ve probably said before, Lucio Fulci is a director with whom, in regard to his work, I have an unsatisfying relationship with. He’s done some fair to goodish movies, like Zombie Flesh Eaters (aka Zombi 2) and City of the Living Dead (which I only just saw and shall “blog up good” as soon as I can). He’s done his fair share of real clunkers like, in my humble opinion, the Spaghetti Western Four of the Apocalypse and the movie I’m looking at here on this article, Manhattan Baby. But he’s also done some really great movies which contribute to whatever genre they happen belong to, like my favourite one of his, the giallo Lizard In A Woman’s Skin.
This one, however, is not a great movie.
To be fair to it though, the spiel on the box is not something I’d be entirely in agreement with. It’s certainly not the incoherent mess that it’s perceived as... at least it didn’t seem that way to me. But, also to be fair, I don’t recall seeing any blatantly pierced eyeballs either... but I understand from the sticker on the packaging that this Shameless version is completely uncut.
No matter. Let me tell you what I thought of it.
This is Fulci’s go at taking popular Egyptology as a starting inspiration and, like so many films before and after it, blending it with formulaic horror methodology and using it to create the trappings of a horror movie. This film felt, to me anyway, to be doing for Fulci’s body of work what the original 1932 version of The Mummy did for the Universal Classic Monster series of yesteryear. That is to say, there is no actual blatant mummy figure in it (Karloff’s Imhotep was only seen in bandages for a few seconds in the original before “transforming” into Ardeth Bey) and instead it relies on Egyptian mysticism and abstract forces of power directed at our protagonists to bring home the scares (although scares would be a bit of an overstatement in the case of both the Universal movie and Fulci’s Manhattan Baby).
It’s not a particularly hard plot and turn of events to crack... perhaps it’s just a bit simplistic for most audiences cultured in a more sophisticated focus on plot development and perhaps that’s why it’s perceived as it is. The script, after all, is not particularly good and is not a million miles away from the early Egyptology-obsessed films which perhaps inspired it. Perhaps less so, in fact.
Still, that doesn’t matter too much either because, frankly, it’s got some great photography and lighting effects and these would normally be more than enough to at least distract this viewer from the weaknesses of the writing and performances (at least in the looping) and give me something I can still really sink my teeth into.
Alas, with this movie that’s just not the case. All in all I’d say that Manhattan Baby’s one, truly unforgivable trait is that it’s really kind of dull and boring and... well it does drag somewhat. Which is a shame because I’ve not seen many of Fulci’s movies and I’d like to get more of a handle on this guy. Admittedly a nice solid atmosphere of bleakness is built up over the first 10 or 20 minutes but this all too soon gets thrown away when the action switches from Egypt to the United States.
Shameless Screen Entertainment do their usual wonderful job with this title (which is a Fulci title that some, to be fair, really love and are happy to watch over and over) with a nice transfer, a load of trailers for their other essential releases and a nice reversible sleeve. And I’m glad that it’s out there on release because that’s what great companies like Shameless are there for... to give us releases we might not otherwise easily get the opportunity to dip our toes in.
And that’s about all I can say about this particular movie I think. I’ll have more to say at some point soon on his movie City of the Living Dead which I found to be a very positive experience (even though it had teleporting zombies in it... I’ll save that for another blog review). For the time being though I’d have to say that Manhattan Baby is not one I’d recommend to any passer by on the street but is a film I believe that some who have acquired a taste for Fulci movies should definitely take a look at if they can.
Posted by NUTS4R2 at 20:50