Doctor Who: The Girl Who Waited 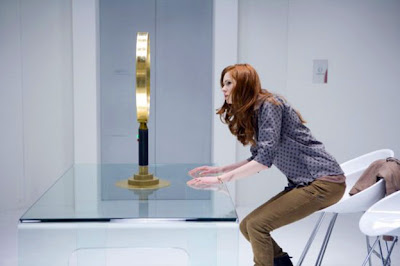 AMYthing Goes!
Doctor Who: The Girl Who Waited
Airdate: September 10th 2011. UK. BBC1
Warning: Spoilers I suppose... not many surprises in this one though.
Okay... here we go again. Hopefully this won’t sound like too much of a repeat of last episode’s review but it pretty much left me feeling in much the same way and since it wasn’t exactly all that thought provoking again, it’s probably going to be a very short review because I don’t have too much to say about this one.
In short then, last nights episode was a standalone story (or so it seems) and it dealt with Amy Pond getting separated by accident from The Doctor and Rory via a “time shift quarantine zone” (for want of a better term) and due to the timing of trying to lock on to her via a dodgy “time magnifying glass” they go to rescue the wrong Amy Pond... that is to say, a bitter Amy Pond who has been waiting and surviving against alien vaccine spitting “killing you with kindness” robots for over 36 years. And so we get all the tension with Rory and The Doctor trying to talk old Amy into helping them re-allign with young Amy and the writer did at least have a go at wringing as much drama out of that stuff as he could.
There were some nice touches in the episode... the seeing through time magnifying glass was a nice “prop” analogy and the “ridiculous looking” glasses that allowed The Doctor to see through Rory’s eyes because his Timelord body would be contaminated with an alien virus if he went to rescue Amy himself. And by this time in Amy’s history, she’s had thirty six years to become a clever clogs brainbox and so she’s made a sonic screwdriver and also constructed a “pet Rory” out of one of the hospital robots. All very cute stuff and worthy of Doctor Who as a show with some sound concepts.
Big sticky-out downer for me though was the fact that she had already passed a week in a few of The Doctor’s and Rory’s seconds before she’s even booked into the reception. So... you know. Did she not notice? How did she get ahold of some food and bathroom facilities etc? What the heck is going on that the writers don’t see these big glaring plot holes? Especially since the “trick” she says she learnt on her first day must therefore have been at least a week after she arrived! C’mon people... this is supposed to be “quality” sci-fi!
Also... although time twisting episodes have always been good for Doctor Who (Blink, the River Song cycle etc) and for science fiction in general (the Star Trek: The Next Generation episode Time’s Arrow for example) this one really was “Basic Temporal Mechanics 101”, that is to say, time travel conundrums you’d dream up for yourself when you were a child of six rather than something that is going to keep someone challenged for very long. Yeah, I know it’s a “family show” and therefore a large percentage of the audience of this one is kids... and yes, I know that’s a very thin writing tightrope to balance on and remain stable... but honestly this was stuff most of the teeny tiny viewers would also have run through a dozen times in their heads and so I was a mite disappointed that there were no real complications other than the expected “dramatic” obstacles put up by old Amy... and let’s be honest, we all knew there was only one possible outcome for that one anyway.
But... it really wasn’t a bad episode and certainly a respectable entry into a season that, although it’s definitely had its low points, is certainly a lot less rubbishy than the last series was. It didn’t let the side down in any way, shape or form and was certainly a strong dramatic contender for this years episodes... just didn’t do much for me is all. But that’s not a problem... and unlike the current series of Torchwood, it’s certainly not outstayed its welcome in any way. The three leads were all very good and the hospital robots (and their home environment) were somewhat iconic again in their echoes of classic Doctor Who from decades long gone.
Definitely worth a watch but don’t expect to be blown off your feet by this one.
Posted by NUTS4R2 at 12:03