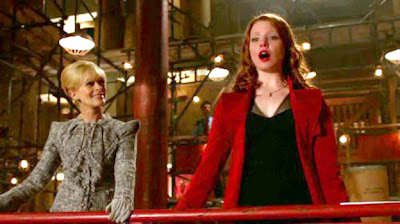 Gather Ye Torchwoods
While Ye May
Torchwood - Miracle Day Series 4
Episode 9: The Gathering
Airdate: 8th September 2011. UK. BBC1
Warning: Spoilers galore.
Oh... really, Torchwood?
You’re just going to skip a couple of months out between the last episode and this one? Okay.
You know, if you’d have done that a lot earlier in the series I would have applauded you for moving the action on at your own pace so you can clearly focus on what you need to focus on. But doing this now is kinda irrelevant, don’t you think? All that’s happened here is you’ve shown how insignificant everything that went down before this little “jump” was in relation to the story. You’ve just confirmed how much needless padding it all was.
Not that we didn't all suspect that anyway but... well, it’s really not good to be doing stuff like this when you’ve only got one episode left to sort everything out... don’t you think?
As you can probably tell from the above, folks. I’m still less than happy with the current series of Torchwood. There seem to be amazing plotholes left in place by the "filler material" and, generally things just don't seem to tie together... or make sense as a whole.
Let’s have a look at this... so Gwen Cooper has been hiding from the British government, presumably since the events of Children Of Earth when the British government went on a bit of a kill frenzy and tried to wipe out Torchwood. Fair enough. And then she gets herself into some kind of skirmish overseas with the current storyline and the boss of the CIA has her extradited. Which means... she can just go on living in Britain again, no longer in hiding and with the government knowing all about her. What the f*** Torchwood? Is this totally insane or am I somehow missing something here. Shouldn't she be unjustly locked up in some dark cellar at the pleasure of Her Majesty? Did IQs suddenly drop as a result of the fact that nobody can die anymore.
So anyway, also two months later, the PR lady goes to the big “promotion” meeting aka to The Blessing which she was told about in the last episode. Wow, these families must be really tied up in paperwork if it takes two months for this to actually happen. Don’t envy them. And The Blessing seems to me to be a huge anticlimax, to be honest. A tunnel that passes through the earth from one side to another (lucky I’m not a geology expert or a basic scientist... then I’d really have a go... big forcefield I guess) and this big crack in the world seems to have Nietzschean properties... that is to say, when you gaze into it’s abyss you see your own monster gazing back at you and this will either cause you to have some kind of lethal breakdown (if I’m interpreting this right) or it will just be like giving yourself a big pat on the back. There’s confidence for you.
Jack’s back and nicely recovering from his gunshot wounds when he was quite literally at death's door... even though, you know, he can’t heal anymore. Yeah, it’s so credible that he can be running around, Torchwood-style, in this condition, is it not? And he has plenty of Retcon, that selective amnesia drug with him. That’s handy. Has he got a secret stash of this stuff then? Or are the ingredients so easy to find out of normal household kitchen cupboards that he can mix this stuff up whenever he needs it at a moment’s notice? Pass the ketchup, dear.
And then we have the return of Oswald Danes who seems to be, is my guess, purely along for the ride now to be a demonstration of the more lethal effects of The Blessing? Or maybe The Blessing is the thing which will push him into saving the day? Who knows? I’ve kinda given up on him to be honest. If that’s the only reason to have this character then it’s a bit weak... everybody in this series seems to have been “overplayed” as something more important than just ballast to the workings of a not so cleverly constructed plot... and it’s not really working to be honest. The wool is not-so-slowly slipping from my eyes.
And, as I seem to have been saying for a number of weeks now, after I finally gave up hope on this new pseudo-Torchwood we’ve been asked to accept... there’s really not much there. So once again, my conclusion on this week’s Torchwood has to be... move along folks. Nothing to see here!
Posted by NUTS4R2 at 08:26