Torchwood 4.8 End of the Road 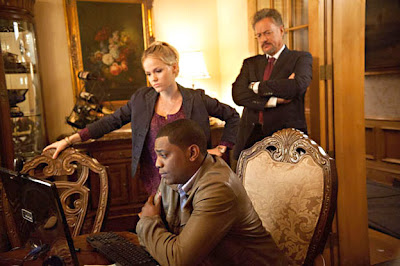 The Road Goes Ever On and On

You know, in a lot of cases I really don’t mind when a movie or film has been padded. Lot’s of countries’ cinema have a very different style of playing out than what I term the standard “cause and effect” style of “narrative” movie making so predominant in both American and UK cinema. You know the kind of thing... from A to F but making sure points B, C, D and E are all contributing to the little rush hour journey towards that point F, just before the end credits. Whereas movies and TV shows made in, say, Japan, Germany, France, Italy and Spain will quite happily deviate onto another tangent altogether if it’s going to give you an interesting ride, whether it’s contributing to the plot or not... it may even take you somewhere far away from your anticipated resolution point and leave you somewhere alien, with a passionate disregard for closure which viewers used to more story led art may find less substantial... a less sweet pill to swallow for the couple of hours they’ve invested.

So there, that’s one kind of padding I don’t mind... but that’s not what Torchwood is really doing at the moment, I think.

Then there’s the other kind of padding which I can also handle if it’s done with a certain enthusiasm... that of keeping a story going because you need a certain thing to be going on for a certain time. I can quite confidently say I don’t really mind that stuff because I love those old black and white movie serials from the 30s, 40s and 50s and, frankly, they’re full of padding. Certainly, most of the episodes in, say, a Republic serial could probably be dispensed with in all honesty... you could probably make do with playing just the first and last episode and probably get away with missing the other stuff out completely and still have it all making perfect sense is my guess. But these things were scheduled to run for 12 weeks of 10 - 20 minute episodes and so you had to find ways to pad the things out. So you’d have a fist fight where someone, or some thing, is either kidnapped or stolen by “the bad guys” and then you’d have a chase where the good guys would lose the bad guys. Then “the good guys” will track or trap the bad guys and another chase and possibly another fist fight before at least one of the good guys will be placed in mortal danger (and often killed until the opening footage of the next episode reveals stuff they didn’t have added to the footage from the week before) in a traditional “cliffhanger” ending so that people would come back and watch the next episode to see how the good guys got out of it.

And then, of course, the next episode would start the whole thing off again until the alloted running time was eventually finished and you actually get to a traditional resolution. And it’s this kind of chase/fight/conflict format which is what made serials like, for instance, King Of The Rocketmen or Undersea Kingdom or Daredevils Of The Red Circle so watchable... and darned hokey too!

Torchwood: Miracle Day seems to me to have a similar raison detre. They want the thing to succeed as a joint production and they’ve commissioned a ten part serial. Trouble is... I’m realising that most of the episodes in this series are really just padding. Last week’s “set up” of Captain Jack’s “across the gulf of time” lover, for example, was loosely and sloppily picked up on this week and, although we thought he’d have something major to do with things... you really didn’t need him there at all and you certainly didn’t need to take all that time setting up this completely disposable character out of the blue. It was a huge waste of the viewers’ time which, if you’ve been paying attention to what I’ve been saying above, could be acceptable as padding if it was at least rocketing along at a cracking pace and keeping everything moving... or at least keeping things intriguing. In a Republic serial fist fight, everything in a room not nailed down or boarded shut would be thrown at all the participants.... test tubes would be smashed, chairs would get chucked through windows and hats would stay on heads for no longer than two seconds. It was nonsense but it was cracking fast paced stuff accompanied by a blaring symphonic score which threatened to do your eardrums in worse than one of the fellas on screen were getting punched out!

Thing is... Torchwood isn’t doing this right now. It’s padding things out and, unfortunately, most of the padding is, quite frankly, very dull. Now End Of The Road had some lively moments and some cast of interest to fans of the sci-fi genre but, all in all, these elements were just dull or implausible. Genre favourite Nana Visitor, for example, had nothing too much to say and was frankly wasted when the guy from Jurassic Park decided to kill himself and take out three expendable characters in the explosion. Fellow Star Trekker John De Lancie turned up as the head of the CIA but, frankly, was having so much fun with the role and was just so darned larger than life that his credibility as someone who could competently run such an organisation would frankly be brought into question by anyone still left watching this show is my guess.

Finally, we’re getting to the “alien tech” and the heart of the story... but there’s only two more episodes to go. I wish they hadn’t gone with the long serial format for this series because it seems to have really killed it. I think most of the content of most of the episodes could have easily been cut or squeezed into ten minute sections or easily dispensed with. This whole thing could have had a lot more impact as a shorter, four or five episode serial... and then they could have gone on to a second story straight after.

As it is, Torchwood has become, for the most part, dull and boring and lifeless. It did start to wake up a little this week, as I noted earlier, but it seems to me that this is all very much a case of too little too late for series four... which is a great shame for what was one of our two leading science fiction exports. Still, only two more episodes left to go and then I can stop writing these worrying autopsies.
Posted by NUTS4R2 at 19:48