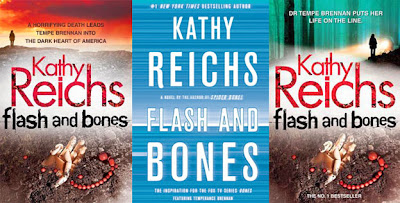 Flash And Bones is the 14th novel in Kathy Reichs extremely popular Temperance Brennan (forensic anthropologist) series. Now, I’ve seen a lot of negative reviews on this one with people saying the quality of the writing is going downhill fast of late but I don’t think that’s necessarily the problem here.

Certainly, everyone can go through a bad patch and I remember the other writer I read of these... well, I refer to them by what they are, modern detective pulp fiction... Patricia Cornwell, went through a very bad patch, in my opinion, some years ago where she had quite a few books out that seemed, somehow, much less on-the-ball than I expected from her. And now she’s out of that slump and her Scarpetta novels are as sharp as they ever were, once more. Perhaps that’s what’s happening with Reichs here or... well perhaps not. I’m not swayed so easily by popular opinion.

I sailed through this one, like I always do with Reichs’ novels and I’d have to say that while I didn’t enjoy the conclusion of this novel quite as much as I would have hoped for, it still holds up as an exciting read. Just a touch different than usual because almost all of her regular characters are mostly absent from the book. Her complicated romantic life as personified by Andrew Ryan is mostly left out here and the character only has one phone call in this novel as far as I can remember. Her ex-husband features more but only in the context of Temperance being constantly badgered and irritated by his new fiancee to help with the wedding plans. I can’t remember having met her before so I reckon she’s technically a new character.

The plot seems fairly simplistic, though, and there doesn’t seem to be much to be done to get the case solved. I’m guessing this one was a really difficult novel for Reichs to write, actually, because it’s hard to make something with a run-of-the-mill plot seem so exciting and vibrant but, even without her regular cast of characters (except Tempe’s beloved cat), it’s a tribute to her writing skills that she had me turning the pages to read more.

One of the tricks she uses, which is something a lot of people are doing more of again these days I’ve noticed (including her nearest rival, the aforementioned Cornwell), is to end every chapter on a new cliffhanger... be that a statement that foreshadows things to come or with the revelation of a new piece of information that doesn’t make sense or... well, anything which will make damn sure you want to start that next chapter straight away to find out what’s going on.

This is where my analogy of these kinds of great modern writers being the modern pulp writers of their day comes into its own... and I’ll stress again as I have done before now... I think pulp writers over the years are great literary artists and I don’t use the nomenclature that grew up around being printed on cheap paper stocks in a derogatory manner when it comes to my assessment of their genius and vitality.

Getting back to the chapter endings, this is exactly what a lot of the old pulp writers would do and wriers like Lester Dent (who wrote the bulk of the 180 plus Doc Savage novels under the publisher’s house name Kenneth Robeson) would rigidly adhere to this kind of cliffhanger approach throughout their entire career... albeit in a slightly more extreme example, more often than not. A random sampling of the last lines of, lets say eight, chapters of Flash & Bones will give you a greater understanding of what I’m talking about...

“But that was changing fast.”

“The look on his face told me something was wrong.”

“When I straightened, the cold steel of a muzzle kissed my left temple.”

“I was about to take a quadruple volley.”

“And couldn’t believe who was walking toward me.”

“And felt the tiny hairs on my neck go upright.”

“The chill spread through my body.”

And so on. Not all of them placing our heroine in mortal peril of her life, to be sure but, given the context of what preceded them, enough to have you reaching for the next chapter in a mad rush. So I’m glad some time honoured traditions are being upheld in modern fiction.

The backdrop to this particular murder investigation is a NASCAR track and the whole story is set around the world of motor racing, something I confess to knowing nothing about. Tempe solves this one by partnering up with two different men, one cop and one ex-cop, at various points in the story and although the prose is as sparkling as ever, I did miss Andy Ryan’s presence a lot more than I thought I would during the course of the novel. I’m wondering though, after fourteen novels in this series, if she’s just had enough of writing about the same people all the time and doesn’t have anything else remotely interesting to say about them. That’d be my guess anyway.

Another added dimension to this is that you have the FBI actually seeming to be working against Brennan and her boss... although you kinda know that it’s all going to turn out okay in the end. But she milks it deftly and you do wonder at some point if the FBI are not just trying to hide murders they’ve committed themselves. Which I think would have made for an interesting conclusion but... who am I to say.

At the end of the day, Flash And Bones, is certainly not one of the best of the Tempe Brennan novels... in fact I’d say it’s easily my least favourite in the series so far. Still, having said that, I don’t agree with a lot of the naysayers on reviews that this is a badly written book. Maybe the intricacies of the plot are a little stale and obvious but I think that the novel in general is written with a great amount of polish and will have you turning the pages at a lightning pace, as per usual with this writer. If you’re a big fan of Reichs the writer (as opposed to Reichs the TV writer where the Temperance Brennan of Bones is but a pale shadow in every way of the “real” Tempe Brennan in the novels) then you’ll certainly not want to miss out on another solid page turner. If you’ve never experienced her brilliant characters before, though, you’d do a lot better starting off with the first novel in the series and working up from there.
Posted by NUTS4R2 at 19:32