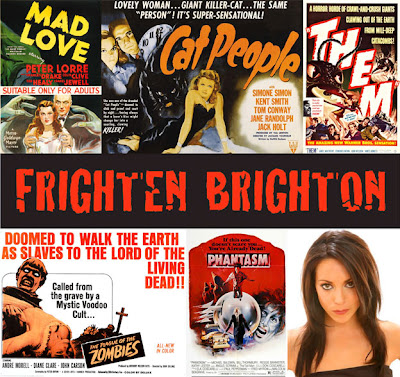 Brighton, Crisp and Even

When I first started up this blog, just over a couple of years ago, I used to semi-regularly feature a diary column which pointed out various up and coming events that film fans, cinephiles and selective rabid mad beasties might find interesting to attend. I kind of lost my way, or at least lost interest, in doing that Fresh From The Diary kinda column after a while, mostly I think because I stopped having the financial resources to regularly attend such things. However, I have been quite regretful of late that I let that regular column slide, to be honest.

Luckily, the organisers of the Classic Horror Campaign sent me an email about their forthcoming Frighten Brighton Horror Festival and it was like a virtual, bloody poke in the eye to get these kinds of things up for people again. Now I’ve not been to any of their Frighten Brighton editions before but I do know it will be a good day out for fans of classic horror movies.

How do I know that?

Well, I have been to some of their double bill screenings at The Roxy in London and, even if the movies aren’t always some of my favourites (although they often are), I can safely say that the atmosphere created by the two co-hosts Cybershizoid and Scare Sarah is always conducive to a more than convivial atmosphere.

Wow. They’ve got the sultry, knowledgable, Goddess-like and sexifying Emily Booth there as a guest at the show. Someone I’ve always wanted to meet in person... although I know I would probably go “all shy” and drool on myself by accident if I were ever in the same room with her. She’s done a lot of stuff in her time and she’ll always inhabit a fond spot in my heart. She’s worth the extremely “value for money” price of admission all on her own, I suspect.

But, in addition to the gorgeous Emily, they also have a stall of horrifying merchandise from Hemlock Books (horror film books, magazines and dvds etc), some “too ghoul for school” horror prizes up for grabs and, not to forget the main event, five incredibly cool horror films which are all must sees... at least in my book. And at £5 per film or the uber-cheap all day £15 pass to all the ghoulish goings on and shivering shenanigans at the Komedia in Brighton that day... you’d be a braindead zombie not to get yourselves down to the show.

Here’s my few words about the five films they’re showing... and don’t worry, no big spoilers in here.


Mad Love 1935
This is Peter Lorre’s first US production, if memory serves me correctly, and it’s yet another adaptation of The Hands Of Orlac. Yep, that’s right, the old template story about what happens when you graft the “criminal” hands (eyes, wig, various bodily appendages, depending on which version of the story you happen to be viewing) onto the body of an innocent and they take on a sinister life of their own, so to speak.

This is a pretty special movie because, in addition to the incomparable Peter Lorre, you have the original Universal Doctor Frankenstein Colin Clive (a direct relation of the original Clive of India, who he played once in a movie) in the film and the whole, stylistic delight is directed by former Dracula cinematographer Karl Freund, who imports his direct experience of shooting early silent German Expressionism into the mix. A real visual treat with a characteristically delirious performance by Lorre. Truly not to be missed.


Cat People 1942
Next up is the equally unforgettable Cat People, directed by Jacques Tourneur under the legendary influence of his producer, Val Lewton. This film had two sequels and one official remake (not to mention a fair few, um, homages?) and it certainly deserves its reputation as a classic scare movie. It’s the movie from which the term “a bus”, meaning a scary shock or sting, was named after and the scene with the bus in this film will certainly give you a start if you’ve not seen it before... as would a similar scene in the same director and producer’s later film, The Leopard Man.

Unusual in a way in that it’s a post-Hay’s Code movie that actually involves the act of sexual intercourse as the driving factor which fuels the fear of the main protagonist Irena (played wonderfully by Simone Simon in both this and Curse Of The Cat People), with a lot of 1940s “beating around the bush” in terms of not mentioning or showing the actual act of... erm... beating around the bush. It’s visually brilliant and subtly moody, as all the RKO horror films had to be in able to compete with the larger budgeted Universal productions at the time.


THEM! 1954
After Cat People we have my personal pick for best, or at least most fun without laughing, of this batch with THEM! Although I expect the audience will be doing a lot of laughing at this one too. Especially when the authorities are puzzled over why something large and ferocious has been after big stockpiles of sugar!

It’s no secret that this movie involves early atomic bomb scare, mutated, giant ants and, frankly, it’s a absolute classic example, and one of the better made, of that interesting little sub-genre. Starring James Whitmore, who I always see as a kind of poor man’s Spencer Tracey, and Edmund Gwenn, who I always think of as a poor man’s Leo G. Carroll (Carrol appeared in the giant Tarantula movie a year later), it’s probably the best “giant anything” movie ever made, I reckon.

Fans of ALIENS should see some similarities as the movie starts off with the authorities finding an orphaned, unspeaking little girl who has survived an attack by... something. And further similarities like seeking out the giant insect’s nest and battling them with flame throwers. I’m not, of course, suggesting Jimmy Cameron actively stole anything from this film... but I wouldn’t be at all surprised if this movie was already in his blood when he made the sequel to A L I E N. I’m sure it’s just an “homage” guys and gals!

Also, look out for the casting in a “blink and you’ll miss him” scene featuring a young Leonard Nimoy as a radio operator. You see? It would be totally illogical for you to miss out on this movie!


The Plague Of The Zombies 1966
The giant ants are followed by a Cornish army of the undead in the Hammer classic, The Plague Of The Zombies. It’s been popularly believed and repeated over the years that George A. Romero’s classic Night Of the Living Dead was the first movie to feature an undead creature rising up from out of the earth. Well prepare to put paid to that modern myth when you see the very same thing happen in a movie which pre-dates Romero’s by two years (actually I believe the first time this was seen in a film was in one of the 1940s Universal Mummy sequels.. but can’t remember which one off hand).


Phantasm 1979
And then, to finish up the day, they have the first of director Don Coscarelli’s four (and counting, five is in the works now, apparently) Phantasm films. If you’ve not seen this before, you’ll think you’ve been smoking something funny all day by the time you get halfway in. Phantasm is actually a really interesting and, definitely, warped film. I still remember the 1979 TV spots of this from when I was a kid. It’s got a really great and unique atmosphere going for it and, apart from all the on screen weirdness, it’s got two great pieces of horror iconography on show too.

Yeah, that’s right. Two. It’s not that often you associate classic horror icons with 1970s cinema but Phantasm is the one which will change your mind.

For starters, you’ve got those wicked, flying killer balls which fly onto your forehead, sticking into you by the two strikingly ornamental blades, before a little drill pops out the front and drills into your skull, jettisoning the associated blood from the back of the ball in a quite ostentatious manner. One of the great horror moments of the 70s.

Added to which you have the irreplaceable Angus Scrimm as... da, da, daaaaa... The Tall Man. Seriously, another horror icon! Partially modelled by the actor on Boris Karloff’s turn in the first Universal Frankenstein movie, the character is a huge visual presence in the history of the modern horror film and has appeared, always played by Scrimm, in all the sequels to date. It just wouldn’t be Phantasm without The Tall Man in attendance.


So there you have it. Five great movies, merchandise and the stimulating presence of the legendary Emily Booth. Get yourselves there people!

Frighten Brighton takes place at noon on the 11th  August at Komedia in Brighton with more details on how to book a ticket at these three links...

Frighten Brighton. The ball is back!