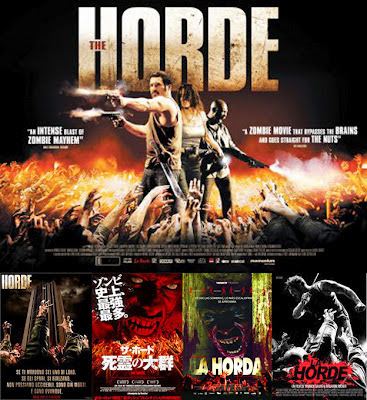 The Horde is a French zombie movie which trades under the comparison, on the DVD cover at any rate, of being Dawn Of The Dead meets Die hard. Personally, I think this particular comparison pitch is pretty inaccurate now that I’ve seen the movie myself... I’d say it’s more like a less frenetic version of the recent action movie The Raid (reviewed here) than anything else. Oh... plus it has those dynamic, we-can-run-around-a-bit kind of zombies that have started to be introduced as a solution to create a more urgent sense of peril in a contemporary audience. That’s okay, I can live with that... I’m not that much of a traditionalist.

Actually, The Raid is a pretty sound analogy, I reckon, because this movie too starts out with a small team of cops infiltrating a block of flats to “take out” the bad guys responsible for the death of their friend (the movie starts off with the funeral). Like The Raid, things go to hell in a hand basket quite quickly for them with a few of them getting iced quite speedily and the remaining survivors being taken prisoner by the very bad guys they are trying to kill.

The bad guys, it seems, have been infected with some quite virulent movie clichés which this film could really have done without having to rely on to provide the usual tension. You have the rough, tough but intelligent leader, for example, with the traditional psychotic brother who’s just not very smart and would rather be “the head bad guy” and do nasty stuff which you know would get all the main protagonists in danger... not the most original way to keep the tension going... although I have seen it work very well just recently (see my review of Lockout right here). Then you have the friend of the brother who is almost-but-not-quite-so-psychotic as the brother and who eggs the character on just when he’s about to do something really stupid while everyone else is telling him not too.

Then you have the good guy who promises the chief mourner at the funeral that he’ll get everybody back safely (a promise he fails to keep within the first ten minutes) and also you have the “this person is supposed to be on our side but, serously, you should watch out for them” character... who seems to be kinda tacked on in terms of her motivation. As do all the characters in fact.

I haven’t figured out quite why I didn’t love The Horde as yet, but the whole film just seemed to be a little lacking in something to me. I even felt there was a lack of explanation for the situation our heroes and villains soon find themselves in but I can’t, taking into account the post-Romero zombie model oeuvre of on-screen, undead shenanigans, even really justify that attitude in myself... since I clearly don’t have a rotted, zombified husk of a leg to stand on in that regards. What I mean by that is...

Just when the few surviving “good guys” are about to be “dead guys” in the first ten/fifteen minutes or so of the movie... the bad guys are distracted from their task by the corpse of a former victim getting up to take a bite out of anyone he can get a hold of. After the zombie has been dispatched with a shotgun to the head (and believe me, even though they finally work out what kills a zombie, it takes these idiots a long time to connect the concept of lack of brain with lack of electrical impulses... sheesh!), the good guys and bad guys alike go out onto the roof of the building and see the world around them being wiped out by zombie hordes. My first thought was... “Really? Why? That’s absurd” because the whole zombie thing suddenly just seemed like a pointless “deus ex machina” to get our two factions working together to fight an outside threat.

Now I know I should not have had that reaction because, as I implied earlier, the classic Romero zombie movies have never (as far as I can remember), given any explanation as to why there are suddenly zombies everywhere... and it’s never bothered me before. But you know what... at least those movies start off with that premise in tact or at least hint that there are hordes of undead things on the move. Even in Romero’s original Night Of The Living Dead, the dead were already lumbering into view in the background before even the main characters were properly established.  And that’s what The Horde is missing in my opinion. Because you are already deeply entrenched in a different plot line and when the zombies start to show up without even having been established in a few long shots at an earlier point in the action... it just feels a little bit like a cheat. Even the well received zombie spoof Shaun Of The Dead had a few little shots of strange zombie sightings mixed in to build expectations before the zombie holocaust started proper.

The Horde, foolishly eschews such intimate and, in this case I feel, necessary foreplay to instead use the surprise element of a corpse rising from the dead to stimulate the audience. Except this tactic will always fall down, of course, because the paying audience already know they are here to see a zombie movie... and so are expecting that very thing to happen at some point in the movie anyway. Not a good call as far as I’m concerned.

Well the characters are played by some really decent actors (What else would you expect from a French movie?) but the trouble is, from what I can see, that they have nothing to work with. The script seems to really stumble because, lets face it, guns and zombies in a block of flats? No brainer for a brilliant time at the cinema. The script starts from a great premise but is hamstrung by being quite badly and sketchily written. Granted, this is a zombie movie here (and, trust me, I love watching zombie movies) and it’s not supposed to be Shakespeare... but this scripting shows that you have to have some semblance of talent to make these kinds of yarns work right. The Horde, I think, suffers from not having enough interesting things happening in it... it mostly just relies on different factions of the main “protagonist group” shouting at each other punctuated by the odd break of body-count, zombie slaughter. It just didn’t work for me.

So there you go... not got too much more to say about this movie to be honest... other than I was glad it only cost me £3 in a sale. It’s by no means a terrible movie... and the action scenes are handled (or at least edited) competently... I’m just a little bit down on it, I think, because I wasn’t expecting either a) a zombie movie or b) a French film, to be this disappointing. There are better genre movies than this one to sink your teeth into but, if you can see it cheap and you like zombie/action movies... then there are much worse examples of the genre out there too.