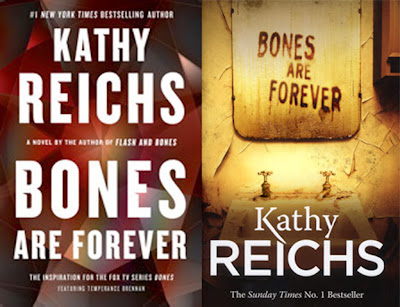 And here we go again.

Another year, another of Kathy Reichs much loved Temperence Brennan novels.

I explained, in my review of Patricia Cornwell’s The Bone Bed, right here, the trappings of my Christmas ritualistic relationship with that author’s work. Well for most years, this ritual is indulged twice at Christmas, once with the new Cornwell book and then followed up with the latest helping of Reichs. So this year was no different from most years.

I mentioned in my review of the previous Brennan novel that, although I thought people had judged that one fairly harshly, I was not in agreement that it was particularly badly written (I think, one could never level that kind of complete towards the lovely and very talented Kathy Reichs), but it is getting to the point where, perhaps, the writing is a bit more formulaic than is helpful and that last one, Flash And Bones (reviewed here), was easily my least favourite.

Due, perhaps, to its changing locations and sense of a bigger canvass than the last one, Bones Are Forever is a much more entertaining novel than the last... though nowhere near my favourite of these particular books. Kathy’s dialogue, as usual, just sings off the page... it’s an effortless and customarily humorous outlook on a life filled with bleakness and it’s to Reichs’ credit that she can have us jumping into Brennan’s head as she discovers the remains of various dead babies and the bleakness that brings with it, while still having us laughing out loud at Tempe’s quirky outlook on life and the way she interacts with her colleagues, peers and various ex-lovers.

The characters are quickly drawn but are, perhaps, a tad too sketchy for my liking although, to be fair, we’ve been living with some of these characters for quite a long time so we are already bringing a lot of their personal histories with us to the novel. If the plot seems a little too sketchy and thin in places, the strength of the short, punchy, dialogue keeps us on a one to one basis with the inhabitants of the book to the point where it almost gets to feeling you are tagging along with a family member.

For all the good things, though, it does suffer in comparison with the last couple of Scarpetta novels which, generally, feel  like they’ve got a little more weight behind them. The breeziness of the character’s main narrative could, perhaps, be toned down a little on certain occasions, to give the events of the novel a more luxurious pacing and give a sharper edge to some of the more serious issues residing in the book.

Reichs, once again, makes use of the old pulp writing trick of ending every chapter with a miniature cliffhanger (usually involving the discovery of a new slant on the evidence or something similar) which won’t be explained until the next chapter... I’m not knocking it, it works for me, although I will say that sometimes I would welcome a break from that kind of routine... just once in a while. But I’m not complaining here, there aren’t that many writers who could pull off Reichs’ structural tricks with the same dexterity which she employs here. She’s got a definite gift for this style of writing.

Ultimately, Bones Are Forever, which seems to have a bit of a clunky title until you realise, later on in the book, that the bizarre Ian Fleming reference is actually pertinent to part of the plot, is another satisfying read from one of the absolute greats of modern crime fiction. Not in my top ten of her books but certainly a more filling word-snack than last years fun but less tasty Flash And Bones. Easily a recommended read for the loyal fans of both this writer and the more substantial, quite different, book incarnation of her Temperence Brennan character. I look forward to indulging myself in the annual ritual, once again, come December 2013.