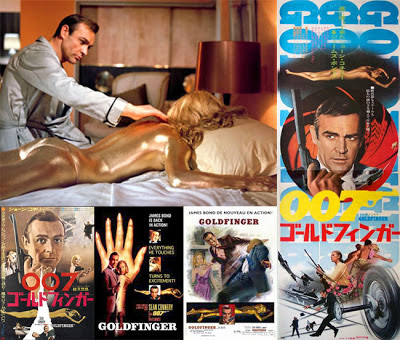 Now it’s interesting because, although this is one of the most popular and beloved movies in the entire EON Bond series, I’ve never really had what you could call a natural affinity with Goldfinger. I do, as a rule, find director Hamilton’s Sean Connery edition Bonds to be a lot less quality than the other Connery films in the sequence, although I believe his first Roger Moore is probably the stand out for that particular actor’s era of Bond.

So for me, Goldfinger is the Bond film that “isn’t as bad as Diamonds Are Forever” but, even though I don’t naturally gravitate towards this one if I want to watch a random Bond film, I have to say that it’s still a lot of fun and a real corker in some respects.

There’s a big difference with the Bond character in this one because, even though he was shown to make the occasional mistake in the previous two movies (no honestly, he was), he did have the reputation of being a bit of an unstoppable hero with almost superhuman attributes by the time of this third installment (always a danger with regularly occurring characters... although they’re often popular just because of these kinds of qualities).

Hamilton, at least, tries to humanise Bond a little more in this one by having him kinda accidentally scraping by as opposed to owning the confrontations he’s in... even while his “laugh along, over the top” elements are still being showcased to the hilt in this one. Even his most successful encounter, for instance, during a fight scene in the pre-credits sequence, has Bond accidentally put himself in harms way by tossing the bad guy directly in the vicinity of Bond’s own shoulder-holstered weapon... all the better to kill him with. It’s a tribute to Connery’s “physical” acting that Bond’s brain can be seen working overtime when he realises his error, to quickly solve the solution with a bit of electric shock treatment involving a bath. That he uses a very similar method to take care of the main henchman of the movie, Oddjob (he of the lethal hat), at the end of the film may, or may not, have been a cynical, deliberate choice.

All the way through the movie, Bond seems to get overtrumped by the story’s main antagonist, except for the two scenes where he takes on Goldfinger at the start - one involves a card game and the other involves a very enjoyable golf game with some quite sparkling dialogue (Goldfinger seems to get all the best lines in this movie). For example, Bond gets himself caught, then he almost gets lasered to death, then he gets shipped out, escapes and sends out a vital message to save the world, only to get himself caught again and the message not reach its recipients. He seems completely powerless for most of the film (he doesn’t even know how to defuse the bomb near the end of the movie when he’s finally got a clear run at it) and the only reason Goldfinger doesn’t get away with his cunning scheme is because Bond, and he possibly doesn’t even realise this himself, has charmed the pants (and knickers) off of Pussy Galore, as played by Honor Blackman... a character who was definitely a lesbian in the book.

There are some interesting things of note in Goldfinger too. The character only referred to as Solo in the film, one of Goldfinger’s gangster “customers”, was based on the character Napoleon Solo in the original novel and Ian Fleming did spend quite some time, before he was pulled off of it, developing the original idea for the TV show The Man From U.N.C.L.E. They obviously kept at least one of Fleming’s contributions in the character name.

Future producer and legal whizz Michael G. Wilson, from what I remember when I saw him talking about Bond at the NFT ten or more years ago, doubled for Oddjob in the shots where Oddjob is driving one of the gangsters to his “pressing engagement”... on his school/college vacation or something, I believe, when filming was taking place for these scenes.

Desmond Llewellyn’s Q character is probably the most significant “changed” character here because this is his second appearance and director Guy Hamilton helped him out with more of a brief for the character... the fact that he’s not exactly fond of Bond because 007 is always going out and breaking his expensive new gadgets is an attitude that Llewellyn really plays out well and would stay with the character for a long time... apart from when it seemed to do a 180 degree turn from time to time, in movies like Octopussy, for example.

Another memorable and noteworthy feature of the film is John Barry’s second Bond score and a wonderful score it is too. I remember going to Barry’s first live concert in many decades (that’d be the one that over-ran for about three hours and left us all stranded in London with no underground at 2am in the morning) and Michael Caine got up on stage and told us about the time he shared a flat with Barry. He was kept awake all night by Barry’s constant plinking away on a piano and the tune he was hearing being worked out was the main theme from Goldfinger... nice story that.

I also remember that producer Saltsman didn’t particularly like the score... although I think I’ve read a lot over the years about Saltzman’s bad call on musical matters (wait until we get to Live And Let Die). Regardless, the score in the film is an absolute classic, full of those gorgeous, wailing brass hits and peppered with metallic percussion shots whenever anything particularly “golden” happens. It’s so influential that, when Barry’s work on the score for The Incredibles was rejected, they got the brilliant composer and musical chameleon Michael Giachinno to write a score very reminiscent of his early Bond scores with some of that movie’s great musical moments relating to specific cues from Goldfinger which must, I believe, have been present on the temp track to the film in it’s early life. Dawn Raid At Fort Knox from the Goldfinger score, for example, has a very prominent “substitute track” in The Incredibles, amongst many others. Presumably, by this point, Barry no longer sounded, or more likely, was no longer willing to sound, like his younger self. Either way, it just goes to show the quality of the music and may help to explain why the original soundtrack album reached number one in the Billboard charts in the USA at the time, and why it stayed in the charts for 70 weeks!

Gert Frobe is, as you would expect, quite excellent in the title role and there are stand out performances from all the cast while Connery smoothly demonstrates Bond’s expertise in a wide area of interests, as is shown in his dinner scene with M in the movie, where he demonstrates his knowledge of wines... although his taste is perhaps called into suspicion a little earlier in the film, where he pointedly equates serving a bottle of champagne unchilled as being similar to listening to The Beatles without earphones. I bet that’s one line of dialogue the writers wished they hadn’t put in on reflection.

Okay... so Goldfinger isn’t one of my personal favourite Bond films, but it is still one of the best. Not a bad one to use as a jumping on point if you’ve never seen a Bond film before, although I’d personally recommend From Russia With Love as a virgin watch if you’ve not seen any of these movies as yet.

Dr. No
From Russia With Love
Goldfinger
Thunderball
You Only Live Twice
On Her Majesty’s Secret Service
Diamonds Are Forever
Live And Let Die
The Man With The Golden Gun
The Spy Who Loved Me
Moonraker
For Your Eyes Only
Octopussy
A View To A Kill
The LIving Daylights
Licence To Kill
GoldenEye
Tomorrow Never Dies
The World Is Not Enough
Die Another Day
Casino Royale
Quantum Of Solace
Skyfall
S.P.E.C.T.R.E
Posted by NUTS4R2 at 15:44