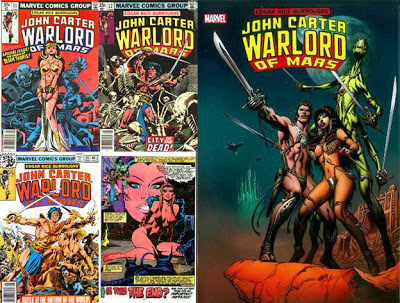 When I was about ten years of age I used to love going into science fiction book and comic shops like my all-time favourite shop Dark They Were And Golden Eyed (which sadly didn’t survive into much of the 1980s), Eye In The Pyramid (ditto) and Forbidden Planet... and peering intently at all the books and comics I couldn’t afford. Among all the Doc Savage, Flash Gordon and Conan books and comics were the John Carter tales and I especially used to like the prominently displayed covers of Marvel’s late 1970s run of John Carter, Warlord Of Mars.

I never caught up to the comics at that point but I did, very slowly, put together a library of the US paperback reprints of the series, over time, and thrilled over Edgar Rice Burroughs tales of, initially, a gentleman of Virginia who finds himself thrust into a Barsoomian (aka Martian) world of red men and women, giant four-armed green Tharks, great white apes and many other fantastical elements which brought a similar kind of thrill as those early 1930s Flash Gordon serials I used to watch when I was a kid. I even remember going into a specialist shop in Southend for a copy of The Chessmen Of Mars and getting into a discussion with the know-it-all store owner there who pointed out to me that having written all those stories of Tarzan The Ape Man over the length of his career, Burroughs had never once gone to visit Africa, where Tarzan made his home. I, of course, then felt it beneficial to myself to point out to the store owner that, yes, that was true, and with all those John Carter novels under his belt, Burroughs never once bothered to visit Mars either.

Yeah, I could be a bit sharp when I wanted. It was all said in fun though.

I’ve always loved the John Carter novels and the character’s obsessive love for his Martian wife is something I find admirable and has instilled in me a good sense of loyalty and appreciation of the fairer sex. This is a good thing.

It wasn’t until the early nineties that I finally caught up, properly, with the 1970s Marvel Comics. I had fallen prey to RSI aka Repetitive Strain Injury not too long after starting full-time employment. I don’t expect anyone who has not suffered from this condition to sympathise or to even understand it. I didn’t even take it seriously myself until it, practically overnight, knocked out the strength and ability for me to use both arms for a good few months. At this point I decided to start reading comics again and, frankly, it was a choice made of necessity. Hardbacks were more expensive in those days and paperbacks were something I just couldn’t keep open and practically read in the condition I found myself in for a while. Comics could just be opened flat so, it was at this stage of my life, that I started travelling around the comic fairs again and scouring London for various surviving comic shops. Over the space of a year I managed to put together a full run of the entire 28 issue series of the John Carter, Warlord Of Mars comic, plus the three “annual sized” issues they put out. And they were great.

Just recently, Marvel have reprinted these as a single volume hardback, presumably to tie in with the movie version of John Carter (reviewed here) and it was something I really wanted to revisit in this format, rather than pull out all the back issues and look at them printed on the cheap 1970s paper which suffered from dot gain and other issues at the time. However, the tome in question was very expensive and I ummed and ahhhed over it for a while... until my brilliant girlfriend came to my rescue and purchased said tome for me as a Christmas present. What a gal!

And it’s a really special and beautiful volume, too, it has to be said, The paper stock it’s printed on does absolute justice, probably for the first time ever, in capturing the truly beautiful artwork of the amazing artists, such as Gil Kane, Carmine Infantino, and Dave Cockrum, who worked on this series. Heck, there’s even a guest issue or two by a young Frank Miller... those were the days. Seeing these fabulous illustrations printed on a stock which finally brings out the details of the inking and colours of the issues is something of a revelation and reminded me of just why I loved reading these comics twenty odd years ago.

The stories told in these pages take place, according to writer Marv Wolfman (one of a few writers in the series) between two paragraphs in Chapter 27 of Burrough’s first John Carter novel, A Princess Of Mars (originally titled Under The Moons Of Mars on first publication) and the love of the writers working on this for the original material is self evident as soon as you start reading it, as narrated by John Carter himself.

There are always going to be one or two things about the Martian series that modern ideas of censorship won’t allow contemporary translators and explorers of Burrough’s books do right (the first book was written 101 years ago at time of writing this article), such as the fact that Martian men and women really don’t go in much for wearing clothes, but what the writers and artists here were able to get right, they did... for the most part... I think Frank Miller may have screwed up on some of the Barsoomian beasts and the addition of a shipboard “computer” on one of the sail-barges in one of the later issues shows the influence of the then current movie blockbuster Star Wars on the comic more than Burroughs, but without that first Star Wars movie coming out, to be fair, it’s doubtful that Marvel would have bothered buying the rights to these characters in the first place, is my guess.

The book gets the tone of the John Carter character just right... he is forever going on, issue after issue, about his lovely wife, the incomparable Dejah Thoris and he acts as a gentleman, where possible, throughout the entire run, as oppose to the lovable rogue he was portrayed as in the recent movie version (I’ve not seen the low budget movie version before that one yet, featuring ex-porn actress Traci Lords, although I hear its relationship to the actual source material is tenuous at best). The artwork is also, for the most part, totally reflective of the descriptions found in Burrough’s original stories and with little, throw away references to later characters in Burrough’s stories, such as Carter’s future son Carthoris and Ras Thavas - The Master Mind Of Mars, the comics come alive in much the same way that the classic stories do. They are definitely not disrespectful of the original material and equally as entertaining.

If you’re a fan of Burrough’s original ten novels (and the collected short stories) about life on Barsoom then you will certainly find a lot to admire and enthuse over in this hardback reprint, which lovingly reprints the entire 28 issue run plus the three annuals. And if you don’t know the character of John Carter very well, and want to dip your toes into the Martian landscape, then these are definitely the next best thing to the original stories that you could read to give you a flavour of the sprit of adventure and sense of honour imbued in the character. A general, all round recommendation from me on this one... and with much thanks to my gal friend!