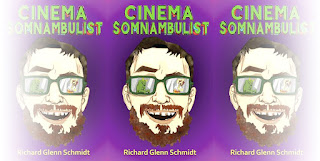 Cinema Somnambulist is Richard Glenn Schmidt’s follow up tome to his first book, Giallo Meltdown, which I read and reviewed last year (right here). This one is the 'same but different' in regards to content but certainly identical in tone and style of that first volume of surprisingly addictive ramblings on a theme.

In terms of the content and what I mean by that? Well, this book of irreverent reviews is mostly culled from his Cinema Somnambulist website and, while there are few gialli in here (a huge helping of which were obviously in the previous book) the diversity of the genres and entries are all over the place so... you know... something to please everyone. So it’s not quite as focused as the previous offering but, that’s okay, it has its very bright moments.

The book begins with a paragraph of questions about what obsessed cinephiles have dreams (and nightmares) about and, after his brief introduction, Schmidt goes on to summarise how he got hooked on movies and also how his tastes have changed in terms of the kind of stuff he watches now. Of course, one cinephile’s obsessions are another celluloid maniacs casual viewing but who the heck cares as the book is light and fluffy and never really loses your interest although, I did find the opening chapters a little harder than some of the rest of the book. Especially when, naturally, some stories and reminiscences occasionally overlap as the entries were originally conceived and ‘virtually published’ to be read separately at different times.

As in the previous book, the author’s way of expressing himself is something you may find is an acquired taste but, once you have acquired it the same kind of 'Schmidtisms' that made the first one so memorable are, naturally, found in abundance here. I especially like his way with (or without, take your pick) words like when he’s talking about Last Tango In Paris where he comments “I was drawn like a moth to a blowtorch” or when he’s talking about a completely different, more horror genre based film (as the majority in this book are). I forget which movie he was talking about here but, try this one... “This turns the dirty hippies into bloodthirsty and fleshhungry (okay, how is that not a word? WTF?)...”. He also, as before, mentions the scores to these things quite often and that, as far as I’m concerned, can only be a good thing... “The music by Music by Antón García Abril is vibrant, classy and never dull.”, for instance.

As you would expect, since these little excursions look at cinema through a somewhat distorted but likeable lens, there’s some stuff you’re going to be agreeing with and other stuff where you’re going to take quite the opposite view from the writer. I can certainly get behind his love of both Demons (aka Demoni) and the original Robocop, for example (well I say original but, no, that reboot doesn’t exist for me) but, I really can’t share his similar viewpoint on the direct sequels to those two classics. Demons 2 had a lot of promise but, for me, almost totally fails to deliver on the sheer addictiveness of the first movie. Ditto with Robocop 2, which the writer loved but, surprisingly since it’s written by the great Frank Miller, I always felt was an unworthy and mean spirited sequel to Verhoeven’s  original master work. That being said, Schmidt goes on to confess that he hasn’t even seen Robocop 3 due to the change in the lead actor but, seriously, he should check that one out. Robert Burke, one of Hal Hartley’s coolest acting collaborators, can more than handle the role and, despite the toned down rating, well... all I can say dude is Robocop takes on a robotic martial arts dude. How can you not want to watch that.

Where the book really comes into its own is where it has very long chapters devoted to specific genre sets of films. So there’s a great section on Asian horror which had me reaching for my ‘films to look out for’ notepad on my iPhone and it’s interesting to see him compare something like the original Ringu, for example, with the American remake. Personally, I loved the original sequence of films so much I’ve tried to stay away from the US version but Schmidt has some interesting things to say on the subject. Also, it was great somebody else had even seen such movies as Mystics In Bali and The Queen Of Black Magic, let alone enjoy them as much as me.

There’s also a section on Anime which, despite the writer’s love of the form, still really does nothing much for me. That being said, it’s nice to know which ones I should take a look at if, for some strange reason, I find myself inclined to look at them. I have to admit, I recently watched the original anime movie of Ghost In The Shell (review pending) and, while I loved the recent live action movie based on it, I found the anime clunky and hard going, to a certain extent.

Another standout section, in some ways, is the long one on the films of Jess Franco. Now the section is pretty funny but, as someone who appreciated certain Franco films a lot, I was kinda offended by the author’s penchant for watching the cut down, 'clothed' alternate versions when he had the chance to watch the proper, uncensored, sometimes ‘with added porn’ versions. Honestly, watching the toned down versions are a waste of time. My message to Schmidt would be... “Forget Erotikill dude... go for the full Female Vampire version. You need to see these things in all their glory and, as it happens, it’s a terrific film. It rocks.” So yeah, there’s that.

All in all, though, if you’re a connoisseur of trashy movies and you don’t mind a less respectful, very humorous tone to the way it’s represented here, then Cinema Somnambulist should definitely be on your list of books to read in the corner of the bus when nobody is looking. I would say start with Giallo Meltdown which I, personally, found to be a much more entertaining reading experience but this second book is definitely a ‘must buy’ if you liked that one. And, seriously, whichever you start with, look into acquiring a copy of this one at some point soon because, believe me, Schmidt’s synopsis of Gigi has to be read to be believed.

For more on Richard Glenn Schmidt, check out his websites www.doomedmoviethon.com and www.cinemasomnambulist.com
Posted by NUTS4R2 at 17:40